Michigan’s running back hasn’t shied from watching Barkley and trying to learn from the all-around back.

Ann Arbor — Michigan running back Karan Higdon understands that most eyes will be on Penn State running back Saquon Barkley when the two teams meet Saturday night.

Higdon gets that, because he hasn’t shied from watching Barkley and trying to learn from the all-around back, who is a Heisman Trophy contender leading a team that is unbeaten and now ranked No. 2 nationally.

The 19th-ranked Wolverines are 5-1, 2-1 Big Ten and big underdogs heading into Beaver Stadium for the “white out” night game.

“Saquon is a tremendous athlete,” Higdon said this week. “I watch him, I watch his tape. He’s a heck of a player. Being able to go against him in his house this weekend is definitely going to be big for me, and is going to be time for me to show up and show who I am and what I can do.

“He’s done that, he continues to do that, and I’m going to show up and show who I am.”

Higdon showed up for Michigan last week at Indiana and ran for 200 yards and three touchdowns, including the go-ahead score when he bounced outside for a 25-yard touchdown in overtime. He became the first Michigan running back since Mike Hart in 2007 to rush for 200 yards.

Michigan coach Jim Harbaugh said this week during a radio appearance in Detroit on 97.1 The Ticket that Higdon had 94 yards after contact against Indiana.

“I didn’t know it was that many,” Harbaugh said. “I think he can do even better, I really do. I think he has the opportunity, and I would like to see the other backs have some of the same opportunities.”

Higdon is now the Wolverines’ second-leading rusher with 70 carries for 401 yards, just behind Ty Isaac who has 403 yards. Higdon leads the team with five rushing touchdowns.

He had 25 carries for 200 rushing yards at Indiana, and Isaac finished with seven carries for 38 yards.

During that final touchdown, center Patrick Kugler admitted he made a mistake, and Higdon had nowhere to run up the middle. He bounced to his left and with the defense drawn right, he took off outside for the score. 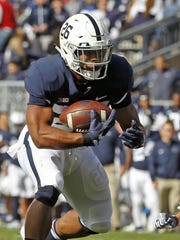 “He has a burst that is very rare in college football and just a motor,” Michigan quarterback John O’Korn said this week. “That specific play was a broken play and he ends up making something out of nothing and getting a touchdown on the first play in overtime. He has that big-play ability. You saw it throughout the game. You saw there were so many times also he was so close to breaking one and just got tripped up or tackled by the last guy, the last line of defense.

“He’s really progressed a lot during his career. He’s had so many moments, I think back to two years ago against Michigan State, I saw him flying off about to break one and he slipped and fell and we talked about that after the (IU) game, and he said that was a play that stuck with him and really motivated him. Just to be able to see him able to grow so much the last two years has been really cool.”

Higdon appreciates the type of all-purpose back Barkley is. He’s effective not only running the ball, but catching out of the backfield.

“He’s elusive,” Higdon said. “He can do everything. He can run away from people, he can make people miss, and he can run through you. I admire that and I’ve got tools of my own that I’m going to expose.”

It would be wrong, Higdon said, if he did not study Barkley’s film.

But there are things Higdon brings to the running back table, and he knows that Saturday night’s big national stage will give him that opportunity to either introduce himself or confirm why he’s becoming a vital part of Michigan’s offense.

“My hunger and my drive,” Higdon said when asked what he wants people to admire about his game. “I’m not going to shy away from anything. I’m going to bring it each and every run, each and every carry, and I think of people see that and know that.”