The UM players are working this week to find some sliver of something, anything from that game that they can build upon. 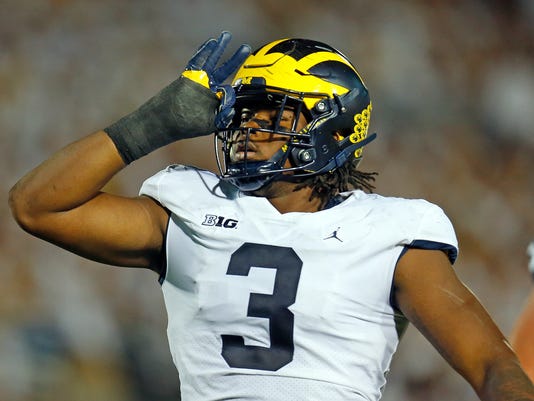 Ann Arbor — In the anger and disappointment of the aftermath of a 42-13 gutting by Penn State, the Michigan players are working this week to find some sliver of something, anything from that game that they can build upon.

The Wolverines dropped out of the Top 25 rankings and are now 5-2, 2-2 Big Ten and face Rutgers, also 2-2 in the conference, on Saturday at Michigan Stadium.

Sophomore defensive end Rashan Gary said the players are responding by coming together with even more determination. It will take more than that, though, to finish the final five-game stretch that includes highly ranked Wisconsin and Ohio State the final two weeks.

The Penn State loss exposed flaws across the team, including the defense that allowed 506 yards overall and 14 quick points to start the game. Michigan entered the game as the nation’s top defense and left as the No. 5 defense.

“That game hurt, I’m not going to lie,” Gary said Tuesday night after practice. “But it’s one of those games that we just come back together, ‘I got your back, I got your back.’ We’ve just got to keep pushing forward. That’s only going to make us play harder.

“First day of practice of the week starting off, you definitely see it in each other’s eyes. Every snap, you’re taking it period-by-period, snap-by-snap, and you see it. Everybody wants to be perfect. We mess up on a play, ‘Coach (Don) Brown, can you please run that play back for us.’ We see the hunger, and I’m happy. Just having that feeling, everybody is just ready to go get after it Saturday, is a good feeling.”

But at the midway point of the season, was Gary surprised the defense would take such a nose dive against a strong offense, featuring Heisman frontrunner Saquon Barkley? After all, last week before the game many of the defensive players said they were eager for the big stage and national television audience to show the college world how good they are.

“I don’t know how to feel,” Gary said. “I’m just happy that it happened because I feel like to be the team that we want to be, we need to go through times like that to push us to be great and even better. I know that things like this happen for a reason. It’s only going to make us come together more and play harder as a team.”

Penn State shot out to a 7-0 lead less than a minute into the game when Barkley took a direct snap and shot 69 yards for the score. It was a wrinkle the Nittany Lions had installed the week before during their bye.

“The crazy thing is, in practice, (defensive coordinator Don Brown) threw it in there,” Gary said. “That play, we had it schemed up in practice. Seeing that and then seeing how we did in the game, we were stuck right there, like, wow. Just not having that one person right there opened up the whole thing. Nah, we weren’t tricked by it. It’s something we have to execute on.”

Gary gave credit to Barkley, though.

“I’m not going to give him too much props,” Gary said jokingly. “But he’s the real deal.”

Now it’s about the defense finding its way again as a group that held every team, except Penn State, this season to its fewest yards.

“We’ve just got to be more consistent, as you see,” Gary said. “Talks about proving — if people think we need to prove things to them, they need to watch this game and every game after that.

“I don’t feel personally we have to prove anything to anybody.”

Harbaugh has never ruled out Black, the team’s leading receiver at the time of the injury, for a return this season.

“He’s still healing,” Harbaugh said Monday night on the “Inside Michigan Football” radio show. “Takes bones so long to heal. But he’s coming to meetings. He’s been around. He has a good attitude.”

Defensive end Chase Winovich’s status is unclear for the upcoming game against Rutgers at Michigan Stadium on Saturday. Harbaugh said Winovich is “working through something” from the Penn State game. It appeared Winovich got hit in the knees during the game and left briefly to be examined in the locker room.