Five years later, UM’s Smith can laugh about ‘The Hit’ 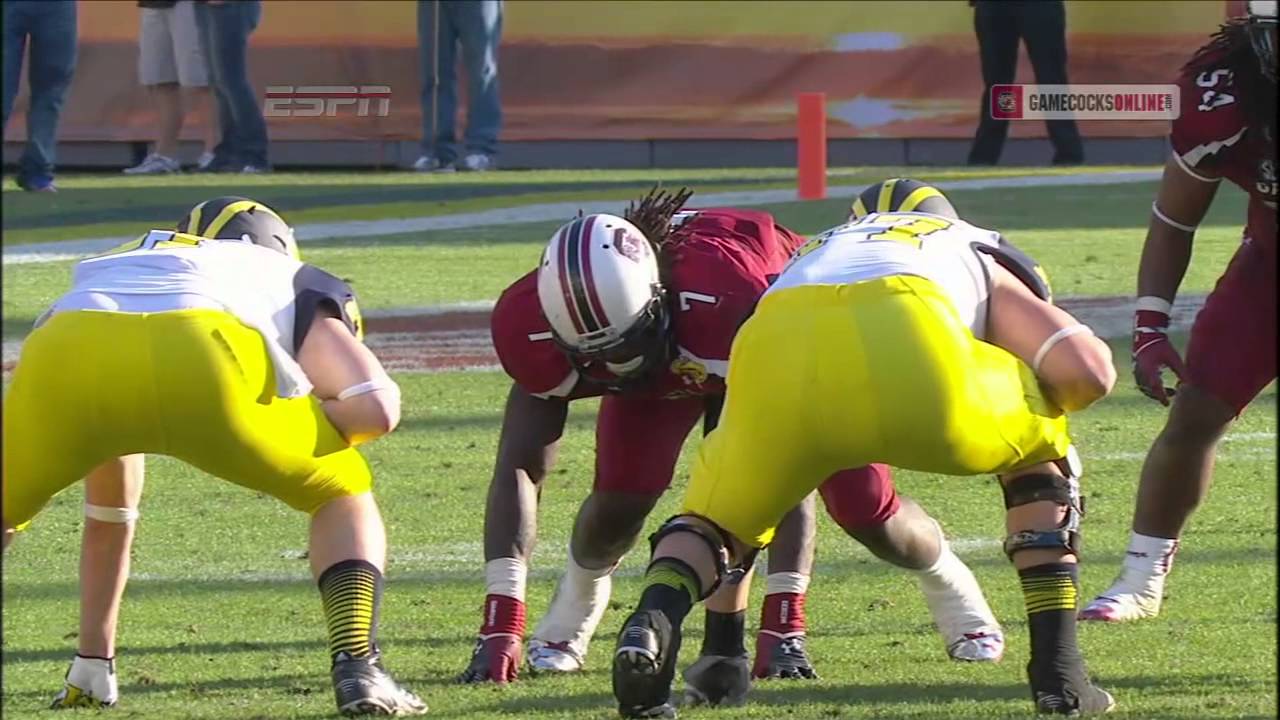 When a moment is frozen in time and shown repeatedly on highlight shows even years later, it is hard to believe the participants, linked forever on video, have moved on.

More than likely, you’ve seen “The Hit” from the Outback Bowl five years ago, when South Carolina’s Jadeveon Clowney demolished Michigan’s Vincent Smith, sending his helmet and long dreadlocks flying. With just more than eight minutes left in that Outback Bowl on New Year’s Day 2013, Devin Gardner had just handed off to the 5-foot-6 Smith, who was immediately slammed by the 6-foot-5, 270-pound Clowney, forcing a fumble.

Not surprisingly, the play has been shown repeatedly since it was announced Michigan and South Carolina would meet in the Outback Bowl again, on New Year’s Day.

“It was a big hit,” Clowney, now with the Houston Texans, told reporters in December. “Still hear about it to this day.”

There had been a breakdown in communication among Michigan’s offensive linemen, allowing Clowney a clear shot at Smith. He said his play was instinctive.

“I didn’t really think about it,” Clowney said. “I just made it happen. It was one of those things I wasn’t thinking about at that point, like, ‘How can I make this happen?’ It was just like, ‘Make a play.’”

Elliott Mealer, an offensive lineman on that team, called Smith the “toughest” player on that Michigan team. Smith proved it when he bounced right up after the hit.

“They don’t really talk about that,” Smith said of how he responded to “The Hit.” “It’s totally a pride thing. You’re out there competing. You’re playing on a high level in Division I. A lot of egos. You don’t want to be that guy laying down. I was raised that way, and I didn’t want to lay down on the field.”

He jokes about the play these days.

“It was a lot of guys missed their blocks, to be honest with you,” Smith said, laughing. “I’ll take one for the team. They (the offensive linemen) were just getting some Gatorade on the sideline.”

Current Michigan running back Karan Higdon grew up in Florida and because he was a fan of South Carolina running back Marcus Lattimore and had a few friends who played there, he became a Gamecocks fan. Higdon made a few visits to South Carolina but was never offered a scholarship.

Higdon, who is now friends with Smith, was actually cheering for Clowney and South Carolina five years ago.

“I was just like, ‘Jesus, he’s a real freak of nature,’” Higdon said of his reaction to “The Hit.” “There wasn’t anything that Vincent could have done differently. It was completely out of his control. Unfortunately, he was at the bottom of the joke.

“(But) he jumped right up. I think that’s the Florida in him. Florida players don’t stay down. I like that.”

Smith and Clowney have never spoken to each other about the play that has forever linked them in highlight history.

While Clowney is playing in the NFL, Smith calls himself a “21st century gardener,” building gardens in urban areas, like Flint and in the Ann Arbor-Ypsilanti area, along with his hometown in Pahokee, Fla., teaching people, particularly youngsters, about team building while educating them on nutrition and becoming responsible.

“Gardens are becoming very popular,” Smith said. “Everyone is talking about them and everyone wants to do it. It’s an important issue. This whole project, it’s all about using resources to connect with other people to come up with the best sustainable solutions.”

The trio research the challenges and problems in communities and reach out to established organizations to partner with them.

Because Smith, who also trains individuals through his Blue Carrot Training, is so involved in his project, he didn’t think twice about The Hit when the Michigan-South Carolina Outback Bowl was announced.

“To be honest, I didn’t. it didn’t cross my mind,” he said. “I’m planting these gardens and do indoor gardens. I’m so excited and so into it, it’s so fun. It’s a whole new ballgame. When I go to these communities, it reminds me of athletes — if we work together, how much we can get done? I’ve been doing this for five years and seeing how much traction and how good it’s been for the community. It blows my mind.”

While Smith and Clowney have never communicated about The Hit, Smith would love to build a relationship with the man with whom he shares video highlight fame, and take Team Gardens to Clowney’s hometown of Rock Hill, S.C.

“I would definitely want to talk to him,” Smith said. “Hopefully we can get together and go to his community. I want to get people excited about foods. I’m trying to get my buddies and different athletes together and bring more resources to different locations. If we can get one kid excited about a tomato and learn how to grow it, that’s a success.”

For the 21st-century farmer, this is life now, five years after the bowl-game hit that will always follow him. He is enthusiastic about passionate about Team Gardens and making a difference in communities.

“There is life after football,” Smith said.

And clearly, there is life after “The Hit.”