Maurice Hurst: Heart issue was detected at Michigan too

Maurice Hurst said the irregular electrocardiogram (EKG) that prevented him from going through NFL combine drills last weekend is similar to a situation that occurred at Michigan.

Maurice Hurst: Heart issue was detected at Michigan too

1. Cleveland: Sam Darnold, QB, USC. OK, Browns, it's time to stop messing around and draft a franchise quarterback. Darnold doesn't turn 21 until June and there's no need to rush him. The team also should add a quality veteran and groom the rookie on the sideline for a season. Tom Pennington, Getty Images
Fullscreen

5. Denver: Baker Mayfield, QB, Oklahoma. The Broncos have tried to patchwork the quarterback position with Trevor Siemian and Paxton Lynch, but the Heisman Trophy winner could be the answer to getting the Broncos' offense back on track. Sean M. Haffey, Getty Images
Fullscreen

6. N.Y. Jets: Connor Williams, OT, Texas. The Jets could use a quarterback, but with the top options off the board, they move to the next logical spot and build up the team's offensive line. Left tackle Kelvin Beachum is average, at best, and in the final year of his contract. Brian Bahr, Getty Images
Fullscreen

12. Cincinnati: Orlando Brown, OT, Oklahoma. The Bengals could use multiple upgrades with their blocking and plugging the 345-pound Brown in at right tackle would be a solid start. Ronald Martinez, Getty Images
Fullscreen

13. Washington: Calvin Ridley, WR, Alabama. With the Kirk Cousins' status up in the air, quarterback is certainly a possibility. But if they can find a way to keep Cousins, wide receiver makes sense. The Terrelle Pryor experiment bombed last season. Jamie Squire, Getty Images
Fullscreen

14. Green Bay: Derwin James, S, Florida State. When healthy, James is a big, physical, play-making safety. He missed most of the 2016 season, but largely returned to form in 2017. He would be a plug-and-play replacement if Morgan Burnett leaves in free agency. Kevin C. Cox, Getty Images
Fullscreen

15. Arizona: Josh Allen, QB, Wyoming. Allen is a polarizing prospect who had a dismal junior season when surrounded by subpar talent. Some NFL decision-makers are going to fall in love with the tools, but whoever drafts him must have a good developmental plan in place. Otto Kitsinger, Associated Press
Fullscreen

16. Baltimore: Courtland Sutton, WR, SMU. Jeremy Maclin was a disappointment, Breshad Perriman has been a bust and Mike Wallace, at 32, isn’t the vertical threat he once was. It's time for the Ravens to revamp the receiving corps, starting with the big-bodied Sutton. Mike Stone, Associated Press
Fullscreen

17. L.A. Chargers: Mike McGlinchey, OL, Notre Dame. The Chargers top two offensive tackles are under contract for two more years, but neither has a lock on their jobs. Right tackle Joe Barksdale hypothetically could slide inside to guard, with McGlinchey bolstering the overall quality of the unit. Tony Avelar, Associated Press
Fullscreen

18. Seattle: Josh Jackson, CB, Iowa. Richard Sherman will be coming back from a ruptured Achilles at the age of 30. He'll also be entering the final year of his contract. Jackson (right) is a ball-hawking, playmaking corner who can be the long-term solution for Seattle. Dale G. Young, Detroit News
Fullscreen

19. Dallas: Denzel Ward, CB, Ohio State. Dallas can add another piece to its young, talented secondary with Ward. His presence should help a group that allowed 66.4 percent of passes to be completed against them in 2017, while only coming up with 10 interceptions. Jay LaPrete, Associated Press
Fullscreen

21. Buffalo. Maurice Hurst, DT, Michigan. Hurst has the potential to climb up boards if he measures well at the combine, and is another realistic option for the Lions at No. 20. He's currently a bit undersized, but he's an explosive interior lineman who can wreak havoc on backfields. John T. Greilick, Detroit News
Fullscreen

23. L.A. Rams: Tremaine Edmunds, LB, Virginia Tech. An athletic, well-built linebacker who shouldn’t have to leave the field, Edmunds would give the Rams a cheaper replacement for Mark Barron, who has a $10 million cap hit in 2018. Don Petersen, Associated Press
Fullscreen

24. Carolina: Christian Kirk, WR, Texas A&M. The Panthers surprised many by trading Kelvin Benjamin at the deadline, leaving them with a void on the outside. Kirk’s quickness in the open field can be a nice complement to Devin Funchess running deep and Christian McCaffrey working underneath. Chuck Burton, Associated Press
Fullscreen 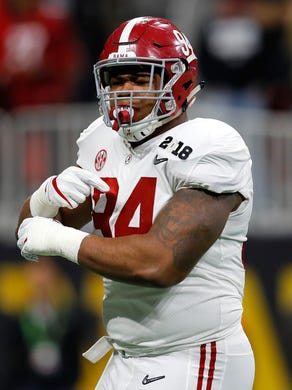 26. Altanta: Da'Ron Payne, DT, Alabama. Arguably no one bolstered their stock more during bowl season than Payne, with a pair of dominant outings in the playoffs. The technically sound interior lineman would pair nice with Grady Jarrett, giving the Falcons an explosive tandem. Kevin C. Cox, Getty Images
Fullscreen

28. Pittsburgh: Mason Rudolph, QB, Oklahoma State. Ben Roethlisberger is saying he wants to play another three years, but flirted with retirement last offseason and might lose some motivation with offensive coordinator Todd Haley on the way out. Rudolph can be groomed as a successor. John Raoux, Associated Press
Fullscreen

30. Minnesota: Billy Price, OL, Ohio State. The Vikings offensive line was much improved in 2017, but there's still room to upgrade the unit. The team struck gold with an Ohio State lineman last year, snagging Pat Elflein in the third round. It wouldn't hurt the team to go back to that well. Price, at 315 pounds, can play center or guard. Michael Conroy, Associated Press
Fullscreen

31. Philadelphia: Martinas Rankin, OT, Mississippi State. Jason Peters is under contract for two more years after signing a one-year extension in June. Then he tore his ACL. The nine-time Pro Bowler turns 36 this month and it would be wise for the Eagles to have a backup plan given the franchise’s Super Bowl aspirations. Michael Woods, Associated Press
Fullscreen

32. New England: Derrius Guice, RB, LSU. Leave it to New England to find outstanding value at the end of the round. With three running backs set to hit free agency, including Rex Burkhead and Dion Lewis, Guice will give Tom Brady something he hasn't had the past decade, the support of a premier runner. Wesley Hitt, Getty Images
Fullscreen

Michigan All-American defensive tackle Maurice Hurst said in an NFL Network interview that the irregular electrocardiogram (EKG) that prevented him from going through NFL combine drills last weekend is similar to a situation that occurred at Michigan.

Hurst, a projected first-round NFL draft selection, went through a routine medical exam last Friday and was held out of workouts. He did remain in Indianapolis and took part in an information meeting with the NFL Players Association on Saturday.

“It was an irregular EKG. Same thing (happened) at Michigan,” Hurst told the NFL Network. “Went through a lot of tests and got that all figured out and was cleared, so hopefully just do the same thing once I get back to school and come back for rechecks.”

He was voted the team's MVP and top defensive player of the year last season.

A Michigan spokesman said he could not discuss Hurst’s medical tests from Michigan because of the Health Insurance Portability and Accountability Act (HIPA), regulations, unless Hurst gives his authorization.

Hurst hopes to be cleared to take part in Michigan’s Pro Day on March 23.

“It was a little bit devastating at first but then I just thought about where I’m at and all the stuff that’s gone into being here,” Hurst said. “I was just excited just to be able to meet all these great coaches and players.

“Unfortunately, the medical stuff didn’t come out clear. But I still got to have the full experience of being at the combine, being around some great players.”

An EKG is a noninvasive test that measures the heart’s electrical activity.

David Chao, a former NFL head team doctor who operates ProFootballDoc.com, wrote in the San Diego Union-Tribune that the irregularly does not mean the end of Hurst’s football career.

“No one wants a tragedy,” he wrote in the Union-Tribune. “This ruling does not preclude Hurst from entering the draft or participating at his pro day. This is the result of one examination where doctors have deemed it necessary to have further tests done.

“Typically, abnormalities are discovered by cardiac echo/ultrasound or electrocardiogram. The hope is the additional tests, which can’t be done instantly and sometimes require stress tests, wearing a monitor for one or more days, seeing heart specialists, or more complicated tests will ultimately clear the player. This happens the majority of times.”

Hurst said he is now focused on getting cleared medically and going through the pro day drills. He was asked what he hopes to prove.

“Just kill it,” he said. “Try to have the best times and have some great position drills and show why I’m the best D-tackle in this class.”

Michigan DT @mohurstjr talks about his combine experience and plans for the future pic.twitter.com/T8ue04sfc0