Confident Michigan knows it can win in many ways

Players realize whether it’s playing great defense or shooting the lights out, victory can come in many shapes

Confident Michigan knows it can win in many ways 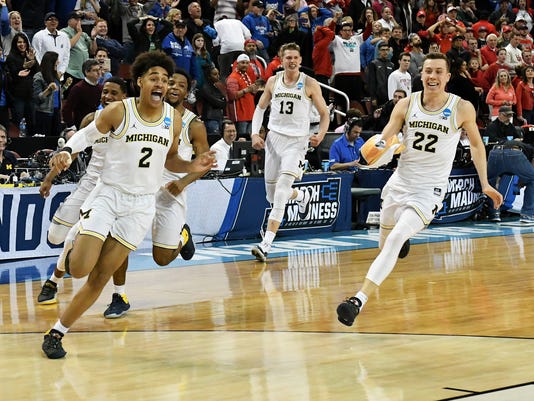 Inside a victorious Michigan locker room with the carpet soggy from a wild water-filled postgame celebration, redshirt sophomore wing Charles Matthews sat back and shook his head.

He admitted when the Wolverines began their arduous journey back in November, he never thought the long, winding road would lead to San Antonio and a spot in the Final Four.

“But we believe now,” said Matthews, who was named the Most Outstanding Player of the West Region, “and that’s where it all starts is the belief system.”

Two days after blitzing Texas A&M with an offensive onslaught in the Sweet 16, Michigan suffocated Florida State with its stifling defense in the Elite Eight. The Wolverines held the Seminoles, a team that was averaging 80 points a game, to season-low 54 points, a third of those coming from the free-throw line.

“Sounds familiar, huh?” Wagner said. “The way we guarded them and the way we’re guarding right now gives me a lot of confidence in this team.”

It’s a sense of confidence that’s at an all-time high heading into Saturday’s national semifinal matchup at the Alamodome against No. 11 seed Loyola-Chicago (32-5). Because if Michigan (32-7) has proven anything this postseason, it’s that everything is possible.

Sure, the Wolverines have been fortunate and taken advantage of all their breaks along the way. But walk around the locker room enough and you’ll hear nearly every player utter the phrase “good teams win in different ways” a time or 10.

That’s what Michigan has done. When Houston’s Devin Davis missed three free throws in the final 24 seconds to keep a sliver of hope alive in the second-round game, Michigan seized it with a deep 3-pointer by freshman guard Jordan Poole as time expired.

When Montana delivered the first punch and put Michigan on its heels by scoring the first 10 points in the first-round game, the Wolverines dug in their heels, held the Grizzlies to nearly as many turnovers (six) as made field goals (seven) in the second half and outscored them, 61-37, the rest of the way.

When Texas A&M was adamant it was going to abuse Michigan with its imposing size in the Sweet 16, the Wolverines lit the Aggies up like a Christmas tree. They made 14 3-pointers, shot a blistering 61.9 percent from the field and needed less than 12 minutes to build a 20-point first-half lead in a game that was well over before halftime.

And when Florida State used its strength in length and numbers to frustrate Michigan’s offense with eight turnovers to seven made baskets in the first half, the Wolverines returned the favor and held the Seminoles to 23.3 percent shooting in the second half, including 12.5 percent on 3-pointers, and a season-low 31.4 percent for the game.

Whether it’s lighting a team up, locking another one down or even using a last-second heave from downtown, Michigan is capable of prevailing in any fashion it takes.

“It speaks volumes about our team,” senior guard Muhammad-Ali Abdur-Rahkman said. “We're not just one dimensional … The offense is not always going to go your way and we just got to win on defense sometimes.”

And that acceptance and ability, according to Michigan coach John Beilein, is what separates this team — compared to all the offense-driven squads he’s had during his tenure — from the rest.

“This is one that believes and the unique part is they really guard people,” Beilein said. “There's a lot going on with what Luke (Yaklich) has done and Saddi (Washington) and DeAndre (Haynes) with the schemes and emphasis in practice. I'm not saying anything against other guys, but Zavier (Simpson), Muhammad and Charles can check. They can really check.

More importantly, they’re all parts of a well-connected, well-defined winning machine that has been clicking at the right time.

Simpson has gone from an early-season backup to a shutdown defender who continues to somehow be snubbed from every postseason team. Abdur-Rahkman has become the calm and composed closer. Matthews has transformed from a player who was lost and unsure of his role into a shining star. Robinson has gone from a starter to sixth-man stud.

Then there’s the rest who have stepped up in countless ways, from Jaaron Simmons’ key spark against Montana and Jon Teske’s clutch free throws against Houston to Moritz Wagner’s tone-setting start against Texas A&M and Poole’s miraculous shot.

Michigan will get another chance to prove it on Saturday and move one step closer to staking its claim as the top team in the nation.

“We’re here,” Matthews said. “This is the best time of the season to be rolling the way we’re rolling and we just want to keep this momentum carrying on. Hopefully we can win two more.”

Up next: Winner advances to Monday’s national championship game against Villanova-Kansas winner.