Brady has a fistful of national-championship rings, while Beilein still is searching for No. 1.

Michigan forward Moritz Wagner high-fives fans on campus in Ann Arbor as he and his basketball teammates make their way to the bus to head to the airport and San Antonio, Texas for the NCAA Final Four on Wednesday, March 28, 2018. Michigan faces Loyola-Chicago in a national semi-final game on Saturday. David Guralnick, Detroit News
Fullscreen 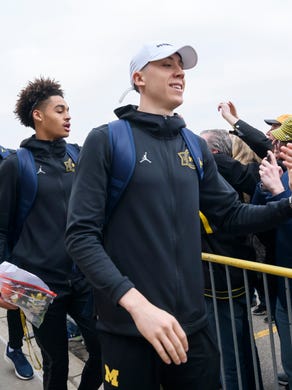 Moritz Wagner interacts with adoring fans as the players make their way to the bus to head to San Antonio. David Guralnick, Detroit News
Fullscreen

The fans cheer for the Wolverines during the rally. David Guralnick, The Detroit News
Fullscreen

Head coach John Beilein thanks the fans and cheers them on as he finishes at the rally. David Guralnick, The Detroit News
Fullscreen

The fans cheer for the Wolverines during the rally. David Guralnick, Detroit News
Fullscreen

Tom Brady has a fistful of national-championship rings. John Beilein is searching for No. 1.

The two Michigan men shared a conversation Thursday morning via FaceTime, according to the official Twitter account of Michigan basketball. It would appear that Beilein was doing a radio-row interview in San Antonio with reporter Jim Gray, who just so happened to have Brady’s contact and called him up.

The New England Patriots quarterback remains an avid fan of Michigan, where he played football in the 1990s, and often as a backup — before becoming the first sixth-round NFL Draft pick ever win five Super Bowl rings (we assume).

Michigan takes on Loyola-Chicago in a Final Four game Saturday night, while Kansas and Villanova play in the other game. The championship game is Monday night.

Beilein made one NCAA title game, in 2013, when Michigan lost to Louisville — which has since vacated the championship, though Beilein refuses to let the Wolverines claim it.

Michigan was in a tweeting mood Thursday, sharing pictures of their Alamodome locker room, which includes a mini-replica Final Four court.

This locker room though... 👌#GoBlue | #FinalFourpic.twitter.com/Ot38ZXtUZm