Shea Patterson will be eligible for Michigan in 2018 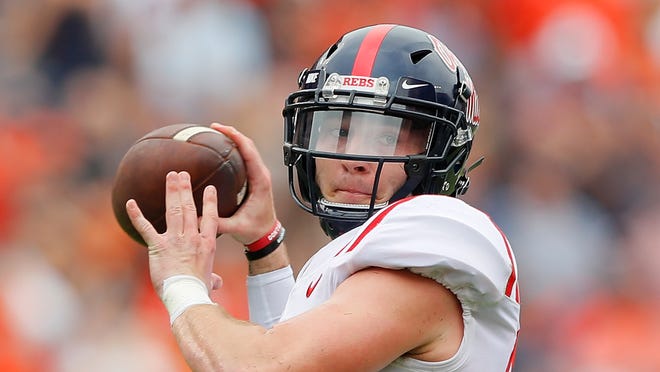 Four months after Shea Patterson transferred to Michigan, he will be granted a transfer waiver by the NCAA and will be immediately eligible to play this fall, a source with knowledge of the situation told The Detroit News on Thursday night.

This decision concludes a twisting, often uncertain and lengthy process since Patterson, the No. 1 quarterback in the 2016 recruiting class, decided to transfer from Ole Miss, which is now on NCAA probation for three years and has one year left of a two-year bowl ban.

Patterson, who had been starter at Ole Miss, filed the waiver appeal through Michigan’s compliance department contending he was lied to by former Ole Miss head coach Hugh Freeze, members of the football staff and athletic department personnel. He believed he was misled during the recruiting process in 2016 regarding the breadth of the NCAA violations.

An agreement has been reached among the NCAA, Michigan and Ole Miss, according to the source, and with the completion of some paperwork, Patterson will be eligible to play this fall.

The source requested anonymity because an official announcement has not been made, but that announcement is expected soon.

A Michigan official said Thursday night the athletic department has “no new information on a final decision from the NCAA.”

Patterson through all of this has competed throughout spring practice with quarterbacks Brandon Peters, who started for Michigan late last season, Dylan McCaffrey and early-enrollee freshman Joe Milton, not knowing what his status would be this fall. Patterson is expected to be in Paris with the Michigan team beginning Friday for a week-long visit.

From all accounts, Patterson has the ability to be a game-changer. In two seasons at Ole Miss, he threw for 3,139 yards, 23 touchdowns and 12 interceptions.

“He’s a playmaker,” Michigan pass-game coordinator Pep Hamilton said Sunday. “If you watched any of his film, it’s obvious that he can extend plays with his legs and he can make all the throws.”

Greg McElroy, the former Alabama quarterback and current ESPN analyst, told The News in December that Patterson brings plenty to the table.

“This kid is extremely special when it comes to being able to improvise,” McElroy said. “One thing I think that has held Michigan back, in today’s game it’s hard to expect quarterbacks to operate solely in the offense. Shea’s best qualities are creating on his own. Sometimes that gets him in trouble, but for the most part he’s an electric player.

“With Jim Harbaugh’s leadership and tutelage, he could be a real a star.”

Patterson was born in Toledo, and his grandfather, George Patterson, played for the Pistons in the 1960s. His family moved to Texas when he was in fifth grade, and then to Louisiana. He completed his high school career playing his final season at IMG Academy in Bradenton, Fla., where he played with current Michigan center Cesar Ruiz.

He was the game MVP in the U.S. Army All-American Bowl, then enrolled early at Ole Miss.

Patterson was heralded as the biggest quarterback to come through Oxford since Eli Manning. He made 10 starts at Ole Miss, including three as a freshman in 2016 when his redshirt was burned. He replaced injured starter Chad Kelly and in his first start and led the Rebels from a nine-point deficit with 23 points in the fourth quarter for a 29-28 win over then-No. 8 Texas A&M.

Desmond Howard, the 1991 Heisman Trophy winner from Michigan and currently ESPN college football analyst, said everything he has heard about Patterson suggests he could be an important piece to Michigan coach Jim Harbaugh’s offense this fall.

“The quarterback position is very, very important for certain programs and Michigan is one of them,” Howard said. “I think Michigan was a quarterback away from being in contention last season.

“When it was leaked out (Patterson) was going to transfer and there was talk he might go to Michigan, guys were telling me, ‘Boy if you guys get him, game is on with that kid. He’s that good of a player.’ And then this whole fiasco started.”

The fiasco to which Howard referred was the lengthy, drawn-out decision-making process regarding Patterson’s waiver appeal. Ole Miss, per NCAA protocol, had an opportunity to respond to Michigan’s appeal. Ole Miss athletic director Ross Bjork in a statement said the school had “no choice” but to file an objection to Michigan’s request to the NCAA for Patterson’s immediate eligibility.

In the meantime, Patterson responded to specific questions from the NCAA case manager, which also were then submitted to Ole Miss. Last week, Ole Miss responded it had “nothing to add” and indicated the NCAA should make its decision.

That lack of response was taken as a positive at that time by Mars.

“I could be wrong, by my interpretation of the message that Ole Miss sent back to the NCAA this morning is, ‘We’re done fighting. Just grant Shea a waiver and get this over with,’” Mars told The Detroit News.

The Patterson appeal re-ignited conversation about transfer rules, something the NCAA currently is considering to a limited extent.

Howard thinks this has become a major problem.

“Is this fair to Shea Patterson and his family that you have them dangling on a string like this?” Howard said. “I’m a person that speaks strongly against the NCAA because it seems like they make it up as they go along. They lack consistency, and that’s a problem. You’re affecting thousands of lives.

Like those interviewed for a story last week in The Detroit News about the transfer rules, all said if a program like Ole Miss is on probation, transfers should have immediate eligibility.

“Definitely. It’s so lopsided,” Howard said. “These coaches can leave, they get fired, they get buyouts, they get all the perks, all the bells and whistles, but the workhorses that make this engine run are held to all sorts of rules and regulations. If a school is under sanctions, that’s the least you can do for these students to let them transfer and play immediately.”

At the core of Patterson’s waiver appeal was proving egregious behavior by Ole Miss, and it was a point he hammered in his response to the NCAA case manager’s questions.

Patterson, in his response, wrote he found a “trustworthy, high-caliber coach” with “values, integrity and leadership qualities,” according to a report on CBS Sports. When the NCAA added the second year of the bowl ban, Patterson wrote, “I knew I’d made the right decision to leave Ole Miss.”

In the response to the NCAA questions, Patterson detailed how he believed he was misled by Freeze and Bjork.

“It doesn't seem fair to me that the only thing standing in the way of coach Freeze making $5 million a year at another school was the discovery that he wasn't the trustworthy, straight-laced role model that he claimed to be," he wrote, according to the CBS story.

Mars represented former Ole Miss coach Houston Nutt in a defamation suit against the school settled last year and put the university in a position to issue a public apology it said it would never make. Ole Miss apologized last October for spreading lies that NCAA violations took place under Nutt’s watch as head coach.

In Mars’ work as counsel for Nutt and, later, the transfers, he revealed Freeze’s misinformation campaign was initiated when Ole Miss received a notice of allegations from the NCAA two years ago. Mars uncovered through text messages, phone logs and interviews, how Freeze and the athletic department launched a plan to mislead media and football recruits – including Patterson – telling them the bulk of the violations involved women’s basketball and track and that Nutt was responsible for issues regarding the football program.

He completely shredded the initial Ole Miss response to Patterson’s appeal, saying that if he didn’t know any better, he “would have thought Ole Miss hired Pinocchio to write its response to Michigan’s waiver request.”

“Along the same lines, while asserting it never misled anyone about the NCAA case, Ole Miss made no effort to explain why so many sports journalists openly said that Ole Miss had lied to them once Ole Miss finally let the media see the Notice of Allegations five months after National Signing Day. Nor did Ole Miss offer an explanation for why it unlawfully kept the Notice of Allegations under wraps for five months if everything it was saying to Shea, the other recruits and their parents in late January 2016 was fully consistent with what was alleged in the official charges they withheld from the public.”

The bottom line among analysts and academics who study the NCAA and student-athletes, is that this drawn-out Patterson process could have been eliminated.

“Let him play,” ESPN analyst Kirk Herbstreit told The News recently. “I don’t know what the issue is. I have no idea what we’re waiting on.