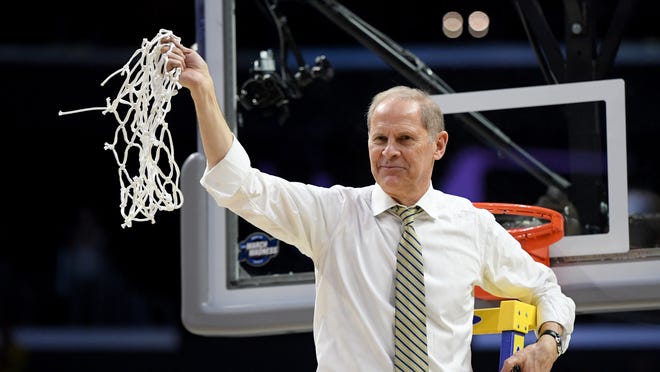 It’s a question that likely won’t be answered until later this month. It’s also one that’s open for debate.

Matthews’ name hasn’t popped up in any major 2018 NBA mock drafts despite his helping lead the Wolverines to their second straight Big Ten tournament title and to their seventh national championship game.

He also isn’t listed among ESPN’s top 100 draft prospects, even after finishing his redshirt sophomore season as Michigan’s second-leading scorer (13 points) and rebounder (5.5) and as one of the best defenders on one of the nation’s top defenses.

Still, Matthews, a 6-foot-6, 200-pound wing, declared for the draft without hiring an agent — leaving the door open to return and maintain his college eligibility — and has reportedly received one of roughly 60 invites to attend the NBA Draft Combine from May 16-20 in Chicago, a clear sign that NBA teams are interested in him.

But is Matthews ready to make the leap to the next level? Not all analysts agree.

“I think so far he’s proven that he’s a legitimate star college player,” ESPN college basketball analyst Dick Vitale told The Detroit News on Thursday. “He’s not afraid to take big shots, not afraid to attack the defense and he also anticipates well defensively. He definitely showed some moments. There’s no question that (Michigan) would’ve never been where they were without him performing the way he did all year.

“But the NBA is a whole different league, man. All you got to do is look at the wavier list and see guys that were big-time stars waived left and right. Too many kids jump too quickly. They’re too much in a haste and they don’t really sit down and take the advice they should get. They hear things maybe they want to hear and they sometimes don’t want to hear the truth.”

The truth is there are concerns with Matthews, as every other prospect. He shot 31.8 percent from 3-point range and 55.8 percent from the free-throw line, which were the second-worst marks among Wolverines with at least 50 attempts. He turned it over a team-high 84 times — 23 more than sophomore guard Zavier Simpson, who committed the second-most turnovers — a sign that he needs to improve his ball-handling skills.

But Matthews still has the measurables with his size and frame, has no shortage of athleticism and is versatile on both ends of the floor. He displayed his explosiveness in the open court and ability to finish at the rim, and has proven he’s durable, starting all 41 games last season and averaging 30.1 minutes per contest.

Matthews got off to a strong start in nonconference play and hit a rough patch during the Big Ten slate before regaining his luster in the postseason. He averaged 14.8 points and 6.2 rebounds and shot 50.7 percent from the field in six NCAA Tournament games to help carry Michigan to the national title game, which it lost to Villanova.

“The thing that matters most to me is when the lights were the brightest, he played his best ball,” ESPN basketball analyst Tim McCormick said. “He was very consistent … and made big plays (in the NCAA Tournament). The gravity and the excitement of the moment did not affect him in a negative way. It actually made him play better and as I watched him play, he looks like an NBA player to me.

“I like guys nowadays that will make the extra pass, that are fundamentally sound, that will go ahead and play defense and they take that end of the court seriously.”

And while Matthews might not have NBA range on his 3-point shot now and could return to improve his perimeter shooting, McCormick said he wouldn’t be surprised if Matthews didn’t withdraw his name at the May 30 deadline and left with two seasons of eligibility remaining.

“I think Charles went to Kentucky to get to the NBA and things didn’t go as well as he had planned,” said McCormick, who played at Michigan from 1980-84 and in the NBA for eight seasons. “Life is about facing challenges, dealing with adversity and persevering. He’s shown some resilience. He came to Michigan and worked on his game and improved greatly.

“I do think he’s capable of getting better, but I’m all about guys chasing their dreams, too.”

Big Ten Network college basketball analyst Shon Morris said if Matthews needs an example of how going through the draft evaluation process can benefit a player, all he has to do is look at teammate Moritz Wagner, who made significant strides as a rebounder and developed more physically this past season.

“(Matthews) is a tremendous athlete and became a very good defender, but I’m going to be very surprised if he doesn’t get some very solid information and guidance about, ‘Look, you need to come back, you need to work on your jump shot, you need to become a better foul shooter and become a little bit more of a consistent perimeter threat,’ ” Morris said.

“I think he’s going to get two or three nuggets that he can work on and most likely go back to Ann Arbor and go from being a guy that’s probably a borderline second-round pick to — if he becomes a little bit more consistent offensively with his athleticism, his willingness to guard and his body length and ability to get to the basket, he could have a really bright future.”

Matthews is projected by ESPN to be a late first-round pick and an early second-rounder by NBADraft.net in 2019. But Morris noted “crazier things have happened” and all it takes is an impressive outing at a workout or the combine to possibly slide into the first round if a team becomes enamored.

Regardless, Vitale and Morris both said Matthews would benefit greatly from another season under Michigan coach John Beilein and would be shocked if he kept his name in the June 21 draft.

“He’s not being projected to be a second-round draft choice … so to go and fight for survival, those kinds of guys become what we call basketball vagabonds — they bounce from here, bounce there,” Vitale said. “I just think if he’s a first-round choice then I can understand your thinking. But boy, to be in a situation with no guaranteed dollars, no guarantee to make a club, that to me is dangerous.

“Based on what I’ve seen, I think another year at Michigan could do him wonders.”