Erick All, a tight end from Fairfield, Ohio, revealed Sunday on Twitter his commitment to Michigan.

OFFENSE Quarterback: Shea Patterson/Brandon Peters – Until the NCAA makes a decision regarding Patterson’s waiver appeal for immediate eligibility, it’s unclear who will be under center for the Wolverines this fall. If cleared, Patterson, who had been a starter at Ole Miss until a knee injury sidelined him last season, is the odds-on favorite, although Peters won’t give up the job without a fight. Patterson in two seasons (10 games) with the Rebels was 238-of-392 for 3,139 yards and he threw for 23 touchdowns and 12 interceptions. Peters started late in the season and threw for four of Michigan’s nine passing touchdowns. David Guralnick, Detroit News/Associated Press
Fullscreen

Running back: Karan Higdon – The hard-running Higdon has gotten stronger while working with new strength coach Ben Herbert, which should make him tougher to bring down this season. Higdon had 994 yards rushing and 11 touchdowns on 164 carries. He averaged 76.46 yards a game. Higdon was named the team’s Offensive Player of the Year last fall and was a consensus All-Big Ten third-team selection. His 11 rushing touchdowns tied for third-best in the Big Ten. David Guralnick, Detroit News
Fullscreen

Fullback: Ben Mason/Jared Wangler – Mason, entering his sophomore season, has added playing linebacker to his plate in addition to fullback. He is considered to be among the strongest players on the team and Michigan coach Jim Harbaugh has praised his bulldozer style. Wangler gives the Wolverines a strong set of hands, adding pass-catching ability, which makes him a versatile threat. Michael Allio, Associated Press
Fullscreen

Wide receiver: Donovan Peoples-Jones – The word “freakish” continues to be used by teammates to describe Peoples-Jones’ ability. They’re saying it again in practices this spring. After his playing time increased as last season wore on, it was clear Peoples-Jones was getting more and more acclimated to the college game. He finished with 22 catches for 277 yards. David Guralnick, Detroit News
Fullscreen

Wide receiver: Tarik Black – Maybe there was a bit of rust his first couple days back to football this spring, but Black is fully recovered from a broken foot in the third game of the season that sidelined him the rest of the year. He was the team’s leading receiver at the time and appeared on the verge of a big season. He had 11 catches for 149 yards and a touchdown. David Guralnick, Detroit News
Fullscreen

Tight end: Sean McKeon – The tight end group at Michigan has depth and talent as McKeon is joined by Zach Gentry, named the team’s most improved player last year, and Nick Eubanks, who is back from injury. But McKeon has been a consistent performer, blocking and catching. He led the team with 31 receptions and had 301 yards for three touchdowns, most among the receivers. David Guralnick, Detroit News
Fullscreen

Left tackle: Juwann Bushell-Beatty – The tackle spots were up for grabs this spring with the departure of Mason Cole, a three-year starter at left tackle who played the 2016 season at his preferred position, center. Bushell-Beatty has appeared in 22 games during his Michigan career and started eight, including seven at right tackle. He appears to be penciled in at left tackle for the moment but don’t underestimate the young players backing him up. David Guralnick, Detroit News
Fullscreen

Left guard: Ben Bredeson – Bredeson was an All-Big Ten second-team selection last season, his second as the Wolverines’ starter at left guard. He is clearly stepping into the role of leader of this offensive line and has spoken this spring of the team’s swagger and confidence under new line coach Ed Warinner. John T. Greilick, Detroit News
Fullscreen

Center: Cesar Ruiz – He is entering his sophomore year but got his feet wet last season, starting six games at right guard in place of injured starter Michael Onwenu. New offensive line coach Ed Warinner has praised Ruiz for his football smarts and understanding the playbook, not to mention his football ability. Ruiz was the nation’s No. 1 center in the 2016 recruiting class and is back at the spot where he said he was born to play. David Guralnick, Detroit News
Fullscreen

Right guard: Mike Onwenu – He is known to his teammates as “Big Mike” and that’s in part what makes Onwenu a tough guy to go against. Onwenu has eight starts in 14 games played on the offensive line. David Guralnick, Detroit News
Fullscreen

Right tackle: Jon Runyan – Runyan earned his first career start in the Outback Bowl and has springboarded that into a productive spring. Runyan, along with the rest of the linemen, seems to have taken to a more simplified approach, and technique tweaking, from new offensive line coach Ed Warinner. John T. Greilick, Detroit News
Fullscreen

DEFENSE Defensive end: Rashan Gary – Gary made clear he wants to be part of the best defensive end duo in the country and wanted Chase Winovich to return for his final season. He got his wish. Gary, even early in his career, carried himself as a veteran and because of that is making a smooth transition to being a leader on this defense and team. He had 66 tackles, including 12 for loss, and six sacks last season. John T. Greilick, Detroit News
Fullscreen

Defensive end: Chase Winovich – Winovich decided to return to Michigan rather than head to the NFL, much to the pleasure of defensive line coach Greg Mattison, who said Winovich can take his game up another notch. He finished with 79 tackles last season, including 18 tackles for loss and eight sacks, tied for the team lead with Khaleke Hudson. Winovich also has two forced fumbles and two fumble recoveries. David Guralnick, Detroit News
Fullscreen

Defensive tackle: Aubrey Solomon – Defensive line coach Greg Mattison’s goal each season is to have two lines ready to go for rotation purposes. Solomon was able to get some productive playing time last fall because of that. He finished with 18 tackles, including two for loss. He will play a bigger role this season. Daniel Mears, Detroit News
Fullscreen

Defensive tackle: Michael Dwumfour – Dwumfour’s name has come up more than most this spring because of how impressive he has performed. Rashan Gary has been talking up his fellow New Jersey teammate since last fall, saying he is quick and gets off the ball like Maurice Hurst. Hurst is now projected as a first- or second-round NFL pick. Could Dwumfour be better? Time will tell, but he’s got the size and quickness to be a disruptive force. David Guralnick, Detroit News
Fullscreen

Linebacker: Khaleke Hudson – Hudson has filled in nicely in defensive coordinator Don Brown’s viper role. He finished third on the team last year with 83 tackles and was first with 18.5 tackles for loss. He is the Michigan record-holder for most tackles for loss in a single game with eight against Minnesota last fall. That tied a single-game NCAA record. David Guralnick, Detroit News
Fullscreen

Linebacker: Devin Bush – Bush is entering his junior season, but even as a sophomore last year it was clear he was already a leader. He led the team with 102 tackles, including 9.5 for loss and had an interception. He was a first-team All-Big Ten selection by the coaches. With Mike McCray heading to the NFL, Bush is stepping into the top leadership role among the linebackers. David Guralnick, Detroit News
Fullscreen

Linebacker: Devin Gil – He reached a level under defensive coordinator Don Brown that all Michigan defensive players aspire – he was called a “dude” by Brown early in spring practice. That is the ultimate compliment from Brown. Brown said Gil has most benefitted from new Michigan strength coach Ben Herbert and said he’s faster, bigger and stronger. “Smarts were never an issue,” Brown said. David Guralnick, Detroit News
Fullscreen

Cornerback: Lavert Hill – Hill has been hampered a bit this spring with a possible hip/groin issue and others have made up some ground on him. But Hill is coming off a solid year in which he was voted All-Big Ten second team by the coaches. He had two interceptions, seven pass breakups and 25 tackles. David Guralnick, Detroit News
Fullscreen

Safety: Tyree Kinnel – Kinnel was named the Wolverines’ most improved defensive player last fall and was All-Big Ten honorable mention. He had 70 tackles, including 5.5 for a loss and a sack. David Guralnick, Detroit News
Fullscreen

Erick All, a tight end from Fairfield, Ohio, committed to Michigan on Sunday.(Photo: Twitter: @eallindi83)

Michigan has added its first tight end to its 2019 football recruiting class.

Erick All of Fairfield, Ohio, revealed Sunday on Twitter his commitment to Michigan.

The 6-foot-4, 225-pound All is considered a three-star prospect, according to the 247Sports Composite. He's ranked No. 19 overall in Ohio and No. 22 in the country among tight ends, according to the composite.

I just want to thank god, my parents , all the coaches that coached me throughout my football career, and all the teams that recruited me but I decided to commit to the University Of Michigan #EarnIt#GoBluepic.twitter.com/zSCdvzFQXp

All's pledge gives Michigan 12 verbal commitments in the 2019 class, and the second in three days. 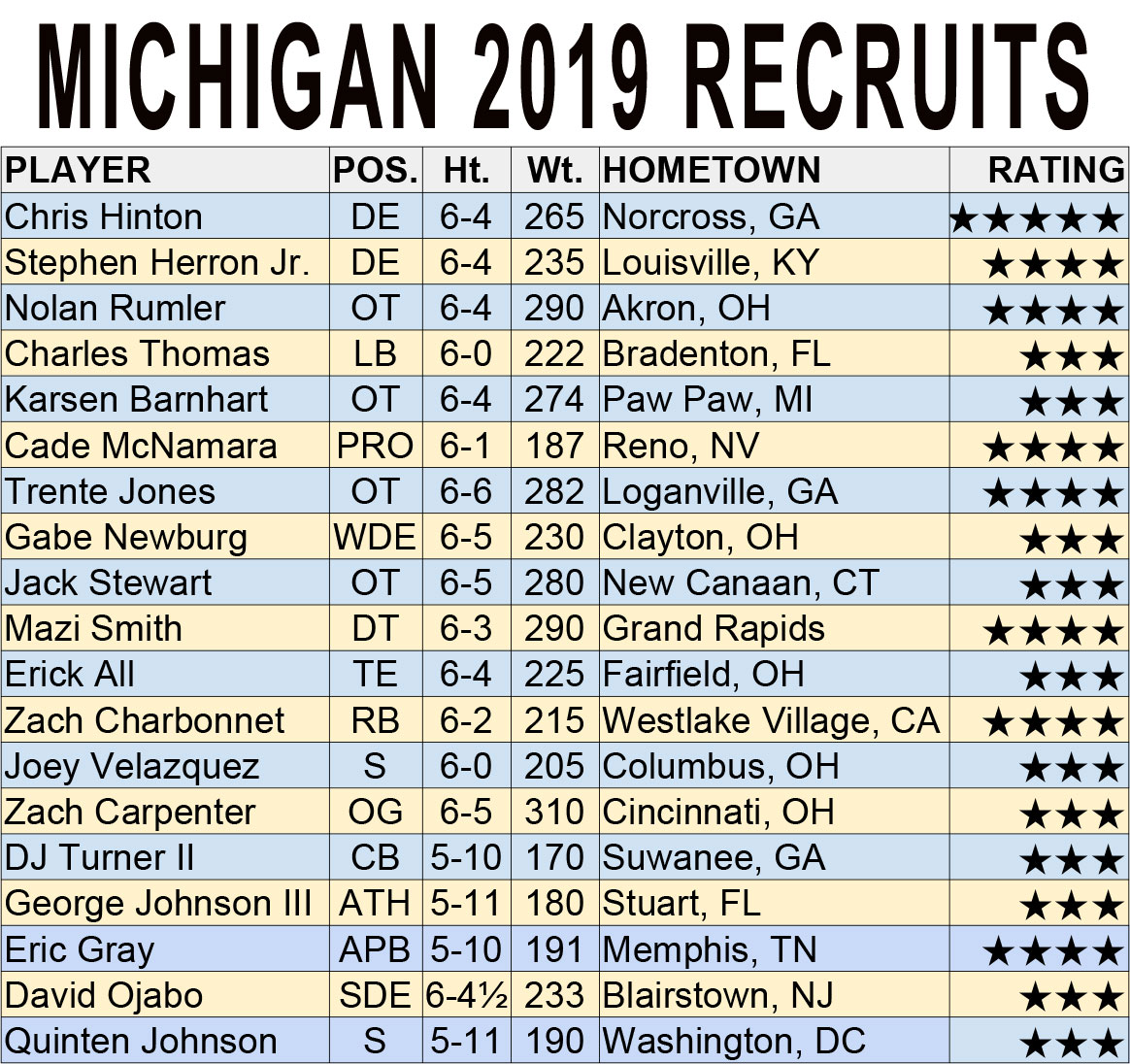