John Beilein said he hopes Chris Webber's return will help serve as a gateway to mending the strained relationship between Webber and the program. 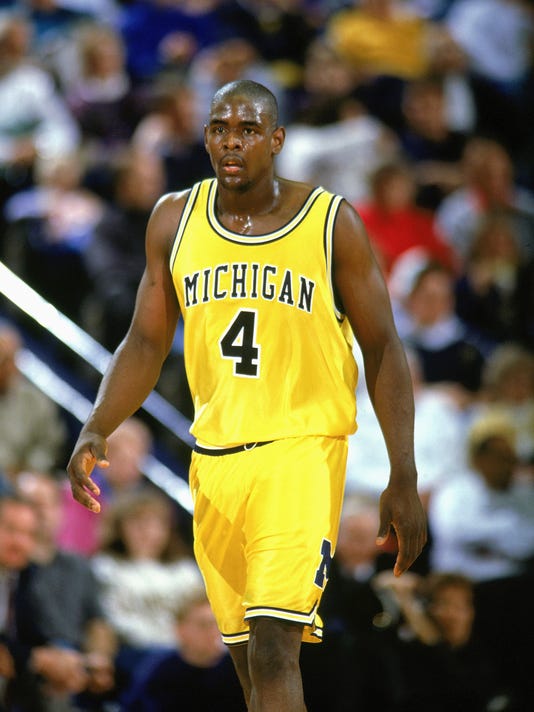 Chris Webber, the former Fab Five member, accepted an invitation from Michigan football coach Jim Harbaugh last week to be an honorary captain at a home game of his choosing this season.(Photo: Duane Burleson, Getty Images)

Ann Arbor — A long-awaited reunion between Chris Webber and the Michigan basketball program may finally be on its way.

The former Fab Five member accepted an invitation from Michigan football coach Jim Harbaugh last week to be an honorary captain at a home game of his choosing this season.

On Tuesday, Michigan basketball coach John Beilein said he hopes the move will help mend the strained relationship between Webber and the basketball program.

"Since the day that I got here, of course, there was five or six years where I was limited in what I could say about that era," Beilein said. "Since the ban has been off, I've reached out to Chris several times. I continue to do that and we're going to continue to try and build bridges and just really work at making sure there's a lot of healing going forward."

Webber’s relationship with Michigan and the other four members of the Fab Five — Jalen Rose, Juwan Howard, Jimmy King and Ray Jackson — has been a sore subject for years.

After helping the Wolverines to back-to-back appearances in the NCAA national championship game in 1992 and 1993, both losses, Webber left for the NBA after his sophomore season.

Then in 2002, the NCAA mandated a 10-year disassociation between Webber and Michigan — a penalty that ended in 2013 — after he was the only Fab Five member linked to former booster Ed Martin and a $600,000 payment scandal. It led to both the 1992 and 1993 Final Four banners being taken down at Crisler Center.

During Michigan's Final Four run this past season, Beilein said he has been working to bring the Fab Five — as well as coach Steve Fisher — back to campus and hopes one day the group will be officially honored.

This might be a step in the right direction.

"I want every player that ever played here to feel like he's a part of that building, including Chris," Beilein said. "We're really looking forward to the day that we get him back here with our team, in front of crowds and things like that."

Webber was the lone member of the Fab Five who didn't have a presence at an October 2016 campus forum celebrating the 25th anniversary of the teams; he didn't respond to invitations. Nor did he participate in a documentary on the team.

Former teammate Jalen Rose has said that Webber should apologize to Michigan and be welcomed back. As a TNT analyst last year, Webber remarked "whether it’s a school that for some reason doesn’t embrace you and you did everything you could for them," he still loved seeing young men realize their Final Four dreams.

Yet Webber was clearly touched when Harbaugh on Friday called into WTKA’s “The M Zone” show, where Webber was appearing, to extend the invitation.

“Coach, you know that’s no problem,” Webber said. “I definitely am honored. As you know, and getting to speak to you over the years, I love what you’ve done with the program. Good luck, and yeah, I’m definitely (going to be) a part of it.”

Harbaugh said Webber will have to pick the game for which he will be captain.

“I would definitely be honored, coach, and you know I would do anything for you,” Webber said. “You know, the No. 4’s at Michigan, we’ve got to stick together.”

Later in the show, Webber spoke about his time at Michigan and working with the children at Mott Hospital.

“I’m just proud to have been a Wolverine throughout my time there, and more importantly, proud of my association with great men and great organizations like ‘Michigan From the Heart’ where we can make a big impact,” Webber said.

Beilein said his contract extension is close to being finalized with athletic director Warde Manuel and he expects it to be signed any day now.

"We'll get to a point where one 'T' has to be crossed and then somebody is out of town or whatever," Beilein said. "It could be tomorrow or it could be before we hit the road recruiting. I want the recruits that we're involved with and our current players to know the plan is to continue coaching."

Beilein said he and Manuel have seen eye-to-eye throughout their talks and added his extension will be a rolling contract where it will continue until he's notified that it will be ending. Under Beilein's current contract, he's signed through the 2020-21 season.

"I feel good so I don't know where it will all end, but the whole idea is to not let it get to this thing where every three years we got to put an extension in because it's working," Beilein said.

In addition to his contract, Beilein's new deal is also expected to come with a larger salary pool for his assistants.

Former guard Muhammad-Ali Abdur-Rahkman's professional prospects hit a snag when he broke a bone in his foot training for the NBA Draft.

Abdur-Rahkman had surgery last month to repair the injury and Beilein said he'll be back at full strength soon.

"I think he had one NBA tryout and it went really well and all of a sudden he ended up breaking the foot," Beilein said. "It's fully repaired and...I don't know what the plan will be, but it did negate some of his opportunities to play in the rookie league this summer."