There was no Plan B, at least one that didn't include the possibility of having his leg amputated. 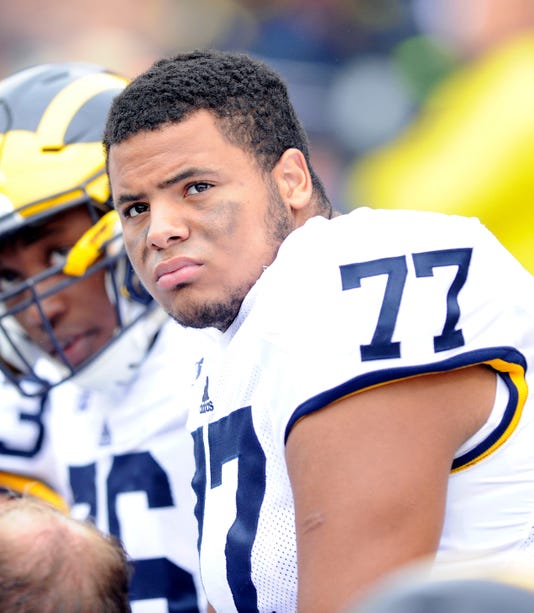 Ann Arbor — Grant Newsome had just finished chatting with reporters on Tuesday, a day after announcing his decision to retire from football when he jokingly tried to squeeze every last moment from the interaction.

Newsome has always been affable and engaging, even with the media, and he laughed that this would be the last time anyone would want to talk to him in relation to a story.

Nothing could be further from reality.

Newsome conditioned hard, even going through bouts of despair wondering why this brutal injury had happened to him and questioning if he’d ever get back, not only to football but to the quality of life he had known.

He suffered a devastating right knee and leg injury against Wisconsin at Michigan Stadium in 2016. Remarkably, he managed to walk off the field until he reached the tunnel and once he reached the hospital, he was minutes from losing his leg. Newsome spent 38 days at UM Hospital, including the first 10 in intensive care and had six surgeries in 40 days.

The knee was dislocated, he fractured the tibia, tore three knee ligaments, suffered severe damage to three nerves and, he said in a letter announcing his retirement on Monday, destroyed the popliteal artery, which runs behind the knee.

“I had short career here,” Newsome said Tuesday, explaining why he doesn’t want any pity, “but a great career here.”

In a lengthy letter Newsome shared Monday on Twitter, he said the “totality of the injury was too much.”

Newsome said the letter was tough to write because of the finality he was imparting regarding his career. He actually wrote most of the letter a year ago.

“During one of the harder stretches of rehab when I was really considering throwing in the towel,” Newsome said. “Kind of used it as motivation to push back.”

He did continue to push through rehab always with the goal of returning to the field for the Wolverines as a left tackle.

After recent discusses with his family and doctors, Newsome had to make a decision.

“Ultimately, we were at the point it was looking right in the face and it was, ‘All right, do you want to go transition to the field and start practicing when camp breaks?’” he said.

“It was kind of that junction point. All my doctors met and my question to them was, ‘If something was to go wrong, what is our Plan B? What is our out plan? What are we going to do help fix anything?’

“And unfortunately, because of the fragile and tenuous nature of vascular grafts and because of the totality of the injury, it’s possible there wasn’t a good fix. It was likely if there was (an) injury to that vascular graft, that it was going to be a salvage operation involving amputating my leg. Having conversations with my parents and the rest of my family, it wasn’t a risk I was willing to accept. Ultimately it was the right decision to make."

Time and again, athletes have retired and they’ve shared their reasons through tears.

Newsome has dealt with this for two years. It was difficult to reach this decision, but once he stopped considering it in the abstract, as he described, and looked at things realistically, his mind was made up.

“I said in the letter, writing that was the hardest thing I’ve ever done. That was true,” Newsome said. “There were certainly days in rehab that were incredibly difficult. I’m the type of person who is very competitive, so a lot of what drove me was the fact I wasn’t going to be another statistic. I was going to be the first person to come back from that injury.

“As much as I put everything I had into it, there was a part of me that felt like, ‘You failed in this,’ or, ‘You quit on it.’ It was tough. It was tough to get over but fortunately, I have an incredible family and support system who were there for me.”

But he never quit on himself.

“I feel good,” he said. “I made peace with the decision. I’m sure I’ll always have that inkling of, ‘What if?’ but this was the right decision and I’m fully comfortable with it.”

Newsome will remain with the team as a student coach working with the tight ends while he works toward a master’s degree in public policy from the university's Gerald R. Ford School of Public Policy. Perhaps, he said, the coaching “bug” will bite him.

“I wasn’t on the field very long,” he said. “Obviously didn’t have a chance to leave a legacy on the field. Just trying to do anything I possibly can to contribute to the team and university as a whole.”

He will continue to rehab.

“There’s nothing I want in the world than to be back on the field, but the decision was looking at me in the face and I had to think rationally for the first time in the whole process, it wasn’t something I was comfortable with.”