Nick Eubanks has enjoyed reliving the moment with Shea Patterson and often reminds him of the pick-six he returned 98 yards for a score.

Michigan tight end talks about how he intercepted starting QB Shea Patterson when they were in high school and returned it for a game-sealing TD. The Detroit News 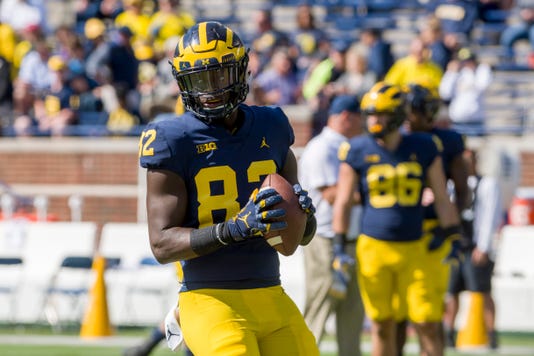 Ann Arbor — In the newspaper account of Plantation American Heritage’s upset of then-No. 2 IMG Academy in the 2015 high school football season opener, Nick Eubanks scored two touchdowns, and his second was the backbreaker.

Top-rated quarterback Shea Patterson had found Drake Davis in the end zone for what appeared to be the winning touchdown. But there was holding called. On the final play, Eubanks, playing at safety, intercepted Patterson and returned it for a touchdown to American Heritage to a 19-7 upset at IMG.

Patterson and Eubanks are both now at Michigan. Patterson is the Wolverines’ starting quarterback, and Eubanks is a tight end.

Eubanks has enjoyed reliving that moment with Patterson and often reminds him of the pick-six he returned 98 yards for the score.

“Every day,” Eubanks said Tuesday. “Every chance I get. But it’s all right. At the end of the day it’s all love between me and him.”

Did Patterson remember the play?

“Oh yes he did,” Eubanks said, beaming. “Most definitely.”

Has Patterson forgiven Eubanks for making that play?

While Eubanks enjoys gloating with his quarterback, he was asked if he’s worried now that maybe he won’t throw to him this fall.

Getting motivated for the opener

The Wolverines open the season Sept. 1 at Notre Dame, and linebacker Josh Uche is ready.

“It doesn’t matter who it is to be honest with you,” Uche said. “The first person we see, we’re hitting out the gates.”

Uche said that approach has nothing to do with the Wolverines coming off an 8-5 season.

“We’re just ready to play some football, that’s all it is.”

Much has been made of the impact new strength coach Ben Herbert has had on the Michigan players since his arrival in January.

But now Chris Partridge, the safeties coach and special teams coordinator, is ready to be Herbertized.

“They’re incredible that staff,” Partridge said. “They’ve changed bodies. They’ve put weight on but kept guys’ speed up. Can’t say enough. He just wrote me up a workout. I’m kinda fired up to follow it. I went into the weight room three days ago and he gave me one exercise and I was sore for three days.”

Don’t rule out the offense

Defensive coordinator Don Brown has said this Michigan defense might be the fastest he has seen, but Eubanks said Tuesday he feels like the offense has been keeping pace.

“We’re right along with them,” Eubanks said. “We’ve got a quick offense, too. Don Brown (has been) finding a way to torture us especially with the stuff they be doing, but other than that we’ve been adjusting to it and playing how we play.”