A BTN spokesman on Wednesday, when asked for clarification of the social media policy, told The Detroit News in an email that “beyond the initial statement, the network doesn’t have any further comment.” 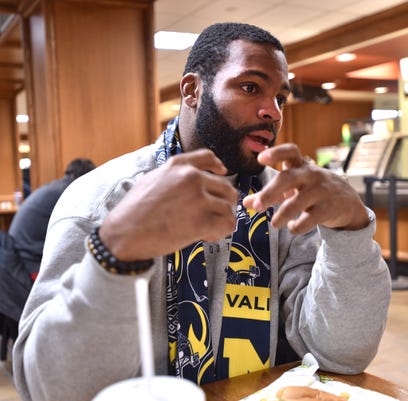 The Big Ten Network said its decision on Monday to suspend former Michigan receiver Braylon Edwards was for a violation of “the network’s social media guidelines.”

A BTN spokesman on Wednesday, when asked for clarification of the social media policy, told The Detroit News in an email that “beyond the initial statement, the network doesn’t have any further comment.”

Edwards is Michigan’s all-time leading receiver and told The News on Monday he was “excessive and emotional and inebriated” when he posted his now-deleted tweet regarding the Wolverines after their loss at Notre Dame on Saturday night.

It is unclear which portion of the tweet violated BTN’s policy, whether it was the profanity or the fact he singled out individual players – quarterback Shea Patterson and center Cesar Ruiz.

“They said I was a little aggressive in my social media handling,” Edwards said. “I said, ‘Yeah, you’re right. I went a little hard, I’m sorry.’ I went to Michigan, I know better. But it gets to the point, it’s emotional.”