Michigan president Mark Schlissel: Jim Harbaugh 'is not on the hot seat'

Schlissel made the comments during a meeting of the Detroit Economic Club on Wednesday afternoon.

Michigan president Mark Schlissel: Jim Harbaugh 'is not on the hot seat' 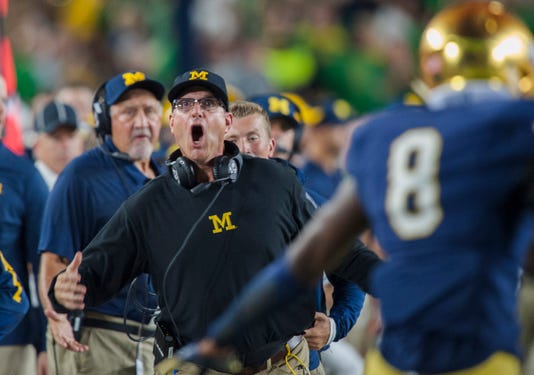 In the court of social media, Jim Harbaugh sure seems to be on the hot seat.

But the man who actually decides that laughed off the suggestion during a Detroit Economic Club forum at the Westin Book Cadillac on Wednesday.

"He is not on the hot seat," Michigan president Mark Schlissel said. "He is under contract for four more years."

With the loss, Michigan has lost 17 straight games against ranked teams on the road.

Still, Schlissel didn't sound too concerned about the Wolverines' 0-1 start.

Harbaugh, 54, is in his fourth year as Michigan's head coach, and is 28-12 overall. He is under contract through December 2021, and makes an annual salary of $7 million.

Schlissel said he has come to appreciate athletics since becoming Michigan president in 2014. He said the Notre Dame game allowed Michigan and Notre Dame to form a research collaboration to deal with the hurricane-relief effort in Puerto Rico.

“It plays a very powerful cultural role at all the universities,” Schlissel said of college athletics. “It keeps alumni connected.”