Wolverines linebacker Khaleke Hudson will miss the first half of Saturday's Big Ten opener against Nebraska after his targeting infraction against SMU last weekend. 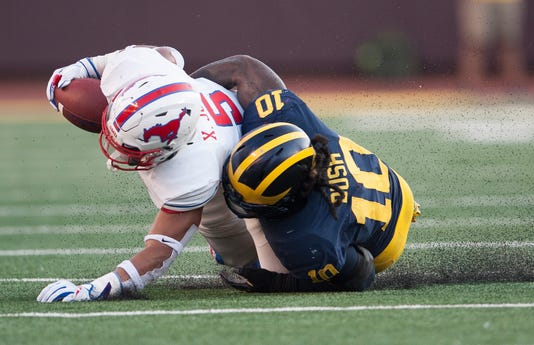 Ann Arbor — Michigan had 13 penalties last week in the win over SMU and 11 were by the defense, including a targeting on Khaleke Hudson.

Hudson will have to miss the first half of the Big Ten opener against Nebraska on Saturday at Michigan Stadium.

Linebacker Devin Bush was asked Monday if most of the penalties were legitimate calls.

Were any of them?

“Nah, none of them were legit,” Bush said.

Michigan coach Jim Harbaugh on Monday reiterated his concerns with the way targeting is called. This was Michigan’s second targeting in the first three games of the season. Josh Metellus was ejected from the Notre Dame game after his penalty in the first quarter.

More: Michigan vs. Northwestern starts at 4:30, MSU vs. CMU at noon

According to the rules, a play can’t target or take aim at the head or neck area of a defenseless player with the “helmet, forearm, hand, fist, elbow or shoulder.”

Harbaugh said after the game he and his staff would evaluate the penalties and teach from them.

“Not really keeping score on 'em,” Harbaugh said Monday at his weekly news conference. “Right now we’re in the process of asking for some clarification so I couldn’t give you the exact number that were legit and weren’t. Definitely we had things we’ve got to clean up, the false start, the holding, special teams penalties. Hit the guy out of bounds — gotta know where the white is and Jordan Glasgow made that mistake.”

Harbaugh does not agree with the targeting call on Hudson.

“Waiting for clarification on the targeting. Still not with that one,” he said. “I’d like an explanation. We’d all like an explanation on that. You compare it to other plays in the game where — they’re saying hitting a ball carrier with the crown of your helmet, that’s happened a lot. The runner, in fact, is leading with the crown of their helmet when they’re running a play.

“The target moves. As someone runs through the hole that ball carrier is moving and the standard of whether you just happen to hit helmets, is that what we’re … because that’s going to happen a lot. People are going to touch helmets. The individual may not be targeting somebody but there could be a hit that happens a lot in football.”

Bush, who has previously been called for targeting, said it’s hard to avoid making contact.

“When a person like that, they’re moving so fast and the decision is almost instant,” Bush said. “He ducks his head, and I would have nothing else to hit. Maybe lower my head lower than his and hurt my neck for him? Nah. It’s kind of hard to make those decisions going that fast.”

He hasn’t seen any consistency with how the penalty is called.

Bush said it’s difficult to scale back but also knows how the call can jeopardize a team.

“If I’m hitting a person and I can get kicked out of the team for that, I’m only hurting my team from trying to win,” he said.

The Wolverines also had a number of pass interference calls, which safety Tyree Kinnel said is a function of playing defensive coordinator Don Brown’s all-out defense.

“It’s just us being aggressive, playing man,” Kinnel said. “We’ve got to trust our technique. A lot of times we’ve got to get our head around or play the ball more instead of the receiver. It’s just aggressive and we’re going to keep after it. Coach Brown said he’s never going to change what he do, so we’re going to get better at it and fix some things in our technique to not get those calls because most of the time we’re right there, but the ref sees it in a different way than we do.”