'I think they're good': Higdon, Evans practice ahead of Nebraska game

After Karan Higdon didn't play against SMU and coach Jim Harbaugh said Chris Evans was working through "something new," fullback Ben Mason reveals the running back have practiced this week.

'I think they're good': Higdon, Evans practice ahead of Nebraska game 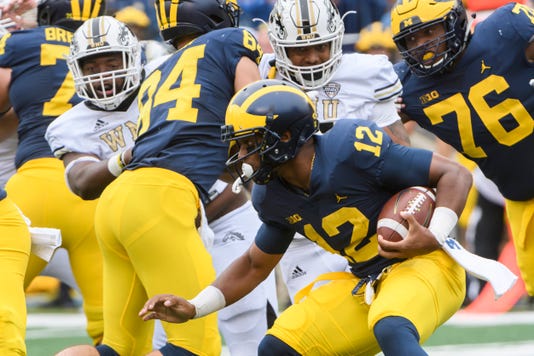 Ann Arbor — It is unclear whether running backs Karan Higdon and Chris Evans will be available for Saturday’s Big Ten opener against Nebraska, but fullback Ben Mason said Tuesday that both have practiced this week.

Higdon, the team’s leading rusher, did not play last Saturday against SMU, and Evans, who started, is working through “something new,” Michigan coach Jim Harbaugh said Monday at his weekly news conference.

Harbaugh said Monday both are “day-to-day” and did not specify their injuries.

Mason, speaking to reporters after practice Tuesday, was asked about Higdon and Evans and their participation level at practice. He said both had practiced.

“Let me just say this, I think No. 10 (Bush) is as good a linebacker as I have ever seen play,” Dykes told reporters. “That kid is a really, really special football player. He can really run, he plays physical. He is an exceptional player, so my hat’s off to him.”

Several of the Michigan players said Harbaugh told the team about Dykes’ comments.

“It means a lot,” Bush said this week. “A lot of respect given from a head coach. Head coaches don’t usually do that. I’m very proud of that, and I’m going to take that to the heart and keep getting better each week.”