McCaffrey is the Wolverines’ backup quarterback and has played in three of four games this season. He is 8-of-15 for 126 yards and two touchdowns. 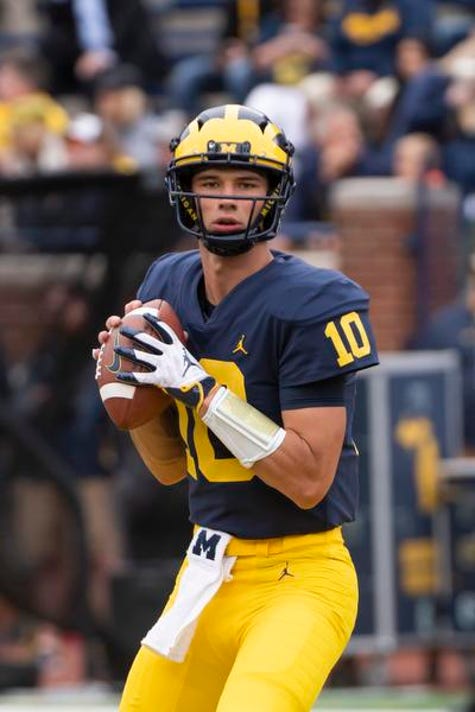 Ann Arbor — When starting Michigan quarterback Shea Patterson had to leave the season opener at Notre Dame because of leg cramps, redshirt freshman Dylan McCaffrey took over the offense and made the transition look easy.

McCaffrey is the Wolverines’ backup quarterback and has played in three of four games this season. He is 8-of-15 for 126 yards and two touchdowns.

“Anyone is going to be nervous going into a game, but it’s a matter of getting that first play done,” McCaffrey said Tuesday night of entering the Notre Dame game late.

“Once you get that first play I was like, ‘All right. There you go. You can breathe a little and have fun with it.’ It’s been a while since I’ve played in a game.”

He had been preparing for that moment and for the playing time he has received this season since he arrived at Michigan. McCaffrey redshirted last fall.

“You’ve got to prepare like you’re one play away all the time because, frankly, you are,” he said. “You never know. That was one of those things where I tried to prepare in case something like that happened. Fortunately, I was prepared when it did.

“I just went out there and tried my best to enjoy it. The team embraced it and the team definitely had my back and I felt that, and I think that’s something that helps any young quarterback getting thrown in there.”

Michigan coach Jim Harbaugh has said appreciates how McCaffrey has played like he’s having fun. That was advice Harbaugh had given that McCaffrey embraced.

“(He said) be prepared because you never know and try to have fun while doing it,” McCaffrey said of Harbaugh. “He always says, 'Play free.' That’s the name of the game.”

McCaffrey also felt comfortable because he has studied the playbook hard and watched carefully last season, visualizing the plays as they happened. He had the plays on his wristband last year and when he’d hear the play call, he’d watch the play and said he’d try to get that rep in his brain while it unfolded.

When Patterson transferred to Michigan in December from Ole Miss, it was unknown whether he would be ruled immediately eligible by the NCAA. He went through spring practice and admits that there was an uneasiness among the quarterbacks.

But since the spring and competition in camp, the quarterbacks, including Brandon Peters and Joe Milton, have become friends.

“We’re all closer as a quarterback bunch than when he first came here,” McCaffrey said. “It’s always a little hesitant when you get someone new. Even as a freshman coming in everyone is going to be hesitant toward you, but I think you start spending so much together through camp and through offseason workouts, you start to get to know each other. And by this time all the tensions have cooled off once there’s kind of a lineup in order, and you can start learning from each other and watching each other and picking little things that you can.”

McCaffrey said he has learned a lot from Patterson.

“He’s helped all of us,” McCaffrey said. “I’d say one thing I’ve learned from watching him, he plays very relaxed. But prepared. A prepared relaxness. He knows what to do but nothing really daunts him. I think that’s something I’ve taken away from him.”

This is a deep, talented group of quarterbacks. Peters also has game experience, having been the starter late last season. That gives the offensive players confidence that if a change is made, they know what to expect.

“We’re comfortable no matter who’s in the game,” tight end Zach Gentry said Tuesday. “Dylan came in and he’s confident and we believe in him. And when Peters comes in he’s confident and knows he can do it. Definitely a good feeling knowing that no matter what we’re going to have a commanding presence in the huddle and somebody that can execute.”

“It helps a ton,” he said. “We’re playing against one of the best defenses in the country every single day. It beats you down a little bit. You definitely get frustrated some days but it helps so much in the long run just playing against good competition.”