UM mailbag: Both fanbases cautious heading into the big game

It’s another edition of UM-MSU week, and for what it’s worth, it has seemed less volatile this year.

UM mailbag: Both fanbases cautious heading into the big game 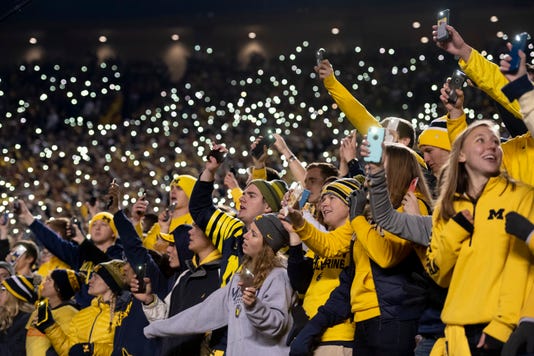 Michigan fans use their cell phones to illuminate the stadium while singing during a time out in the fourth quarter last week.(Photo: David Guralnick, Detroit News)

It’s another edition of Michigan-Michigan State week, and for what it’s worth, it has seemed less volatile this year. Haven’t really heard the usual nasty barbs thrown back and forth. Maybe that means the two fanbases have reached a level of civility. Uh, no. That’s taking it a bit too far. Perhaps both fanbases are being cautious. That might be more like it. Michigan has a lot of pressure heading into this one considering Harbaugh’s much-discussed record against rivals Michigan State and Ohio State, and Michigan State has dealt with injuries and an offensive line that hasn’t been exactly sound and hasn’t given talented quarterback Brian Lewerke much time to do what he can do.

This will all change, of course, by kickoff. There will be "Little Brother" comments thrown around and "Little Sister" responses, and so it goes.

Until then, time to tackle a few mailbag questions:

►Question. Michigan has NOT been good in the red zone this year (on offense or defense), MSU HAS. How important is it that they make this a point of emphasis this week in practice and what can they do (at this point) to address it? — @jeff122380

►Answer. Jeff, you asked two good questions and I’m handling them as one. You know, saving postage. And wow! Really!? Michigan State has the No. 1 rush defense? Noted. Ha! So this is what this game is going to prove — is Michigan’s offensive line as improved as it has seemed? The line is facing the best front seven it has all season and best since Notre Dame in the season opener. Wisconsin was by no means a weak defensive front, but it wasn’t a vintage Wisconsin defense. It’s going to be hard for Michigan to match the rushing output they’ve been able to generate in recent weeks, no doubt about it.

The Wolverines are 28th nationally and fifth in the Big Ten in rushing, averaging 217 yards a game. Karan Higdon has been a huge part of that with five 100-yard games in the six he has played, and he has run hard and churned yards after contact. Now, remember one thing — Shea Patterson. The 81-yard run last week against the Badgers wasn’t a fluke. He can be dangerous and can be the key that potentially somewhat unlocks the Michigan State rush defense.

As for the red-zone issue, particularly on offense, yes, I’d agree, it hasn’t been ideal. The Wolverines are ranked 51st nationally and seventh in the Big Ten in red-zone offense. In 30 trips, they converted 26 times, including 18 touchdowns. So that’s really where the concern for Michigan is — good that Quinn Nordin is 8-for-8 on field goals in the red zone, but half of those should have been touchdowns. Of the 18 touchdowns, 12 have been rushing scores. Twice Michigan has failed because of interceptions. In a game like this, field goals might be enough, but the Wolverines have to be more creative in the red zone and come out with touchdowns. Those work in any type of game. Go figure.

►A. Better? I’m not ready to say that, but I would agree Brandon Watson is having an exceptional year and has raised the level of his play. He’s certainly had some highlights this fall, starting with the interception at Notre Dame and then had the 46-yard pick-six against Maryland. Lavert Hill currently leads the team with six pass breakups and also had a pick-six this season, a 21-yard return against Wisconsin last week. With Watson elevating his game, that has given corners coach Mike Zordich more options, obviously, knowing there’s not going to be a dropoff.

►Q. Will Tarik Black be back by the OSU game? How likely is it that Brandon Peters will transfer to Indiana? — @destmf45

►A. You had a couple questions that I decided to combine. So, the players this week mentioned that Black has quickly mended and is getting closer to returning. Saturday will mark eight weeks since his injury that Jim Harbaugh has described as the same injury to Black’s left foot last season. Now, we don’t know the exact injury or what type of surgery he had. He was injured in the first third of the season last year and probably could have played in the bowl game, he said, although he was not 100 percent.

Black has been out of a boot for a couple weeks and Nico Collins said he has seen him running some routes and using the treadmill. So that’s not even close to be at game speed. We don’t even know if he can make cuts let alone how he’s straight-ahead running. It felt like Shea Patterson and Collins were teasing about Black maybe being ready for a comeback this weekend. Michigan is off next Saturday, so that’s more time to heal. Then, four regular-season games remain starting with Penn State at home. Again, hard to say because we don’t know all that much about the actual injury, but that seems like a more reasonable estimate.

As for Peters, I see it this way — he was an early enrollee on pace to graduate in May. The dance card is clearly full at quarterback at Michigan, regardless what Patterson decides after this season. You mentioned Indiana as his destination. I know that seems obvious because of his Indianapolis roots, but the Hoosiers are also well-stocked at quarterback and like the talent they have there. I think there might have to be other options.

►Q. What do we think about Milton’s appearance on Saturday against Wisconsin? Is this another guy that has leapt over Brandon Peters? Is there a reasonable outlook that says one of these guys is gone at season’s end? — @FredSDTW

►A. Scott, I don’t think much of it other than I really still have zero idea why he was inserted in that first drive when there was so much momentum with Shea Patterson. That was a puzzling play call. As for Peters, who I still think is a very good quarterback who should have gotten a chance earlier than he did last season, he has been lost in the shuffle. As far as what I think about which quarterback might transfer, see above answer. I think Peters can take his skills elsewhere and have a productive experience.

►Q. Can you please stop asking Jim about injuries? It’s cringe-worthy every time. Let the guy be. — @Hammett313

►A. Andrew, I’m sorry you feel that way, but I can control your response to my asking a reasonable question just as much as you can control whether I ask it. Were you upset when I asked Harbaugh a few weeks ago after a game about Rashan Gary and Chris Evans and their injuries? Because Harbaugh actually answered. Were you upset last year after the Air Force game when during the Monday news conference after no one asked about Tarik Black and his then-undisclosed injury, I finally did and … Harbaugh offered a lengthy response?

I’m not sure why the Harbaugh reaction to my questions about Rashan and Ben Mason offended some. He gave me a semi-eye roll and seemed agitated. Big deal. I’ve done the same to him, as he pointed out in July. Was it unreasonable to ask if Ben Mason’s role last Saturday was limited because of game plan or injury?

The beauty of this is, he can just answer with a non-answer as he did and call it a day. But to say stop asking questions that should be asked is ludicrous. If you also noticed Monday, he cracked a joke and laughed about it later in the press conference. Look, if people want to watch and listen to these pressers, fine. If they want to criticize questions, fine. Doesn’t affect me, just like Harbaugh’s reaction didn’t faze me, and my questions ultimately don’t faze him.

►Q. Does Jim ever think about the 1984 game when he broke his arm against MSU? — @rodneymark15

Answer: So speaking of cringe-worthy — I’m talking in terms of answers. You know, Rodney, that is a great question and most coaches would happily regale you about plays from their past. MOST coaches. Not Jim Harbaugh. He tends to fall back on this as his typical response — “I don’t want to peel back the onion,” or something along those lines. That’s fine. That’s who he is, but for the life of me I can’t figure out why it’s so hard to share insight when asked a question like that at a presser. Now, he’s more than comfortable doing it in a controlled setting like his podcast these days.

He was asked three years ago about this very instance, and this was his response: “It’s in the past. Sometimes it hurts, and that hurt. You can run from it or learn from it.” There you go. Again, he’s probably heard that question and the Ohio State guarantee question a million times, so he’s understandably tired of answering, but it’s not a bad thing to share a tidbit or more for your hungry fanbase. Is that asking too much? (See what I did there?)