There has been no love lost between the Spartans and Wolverines in recent days. This past summer, though, was a different story. 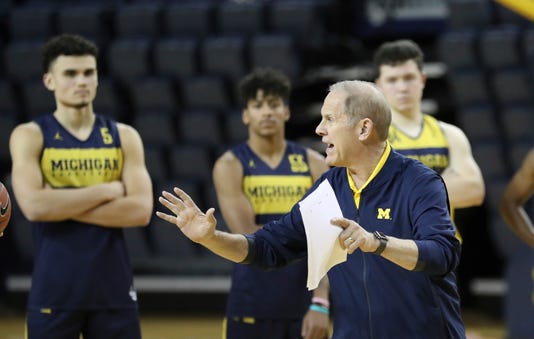 Ann Arbor — There has been no love lost between the Spartans and Wolverines in recent days.

This past summer, though, was a different story.

And among the many messages were a couple from what some may consider an unlikely source: Michigan State coach Tom Izzo.

"We heard from a lot of good guys but within the first two days when I did get to my phone, Tom had text me two or three times,” Beilein said Monday during his team’s media day.

“There's a lot of respect Tom and I have for each other, so that's really good.”

More: Wolverines to rely on defense to help with transition

“It wasn't like, 'Hey, get well soon.' It was like a long note,” Beilein said. “I don't know Mark Dantonio at all really. I talked to him one time. That was really nice of him, but there were a lot of people all over the Big Ten that were sending us goodwill or good wishes.”

Of course, the Michigan-Michigan State rivalry has been swept up in last weekend’s pregame fiasco at Spartan Stadium and the raging war of words between Michigan football coach Jim Harbaugh and Dantonio that has followed.

While the football feud may show the prickly side of the rivalry, that was pushed to the side when the news came out regarding Beilein’s health.

“There's a lot of good out there in coaching and of course we're all going to talk about the he said, she said and all the stuff that can happen,” Beilein said. “I think we all wish the best for each other, but we do have rivals out there and things happen.”

As far as his recovery, Beilein said he’s still limited in what he can do physically and has scaled back his workload. For example, he’s delegating more responsibilities to assistant coaches Saddi Washington, Luke Yaklich and DeAndre Haynes to run individual workouts in the morning while he attends cardio rehab.

And when asked how his heart is holding up, Beilein quipped, “I’m still in love with my wife very much.”

“I've been pretty vigilant…There's a certain way I have to work out right now to get everything back to where it was. Actually, get it back to better,” he said. “I feel absolutely great.”

Last week, the G League — the minor league organization of the NBA — announced it will begin offering $125,000 select contracts to elite prospects next year who aren’t yet eligible for the NBA but don’t want to go the one-and-done route in college.

When asked for his reaction to the new path for players to pursue, Beilein opted to compare it to baseball.

“Nobody thinks anything about a baseball player that goes pro right out of high school and he's throwing a 100 mile per hour fastball and they give him a million dollars, but he's playing in Peoria, Illinois all of a sudden and he's not up with the major league team,” he said. “So, it's all part of it and we just keep trying to find the right way to do it.”

Beilein didn't quite say where he stands on the proposal but noted something must be done with the one-and-done conundrum.

"We just keep trying to find the right way to do it. Fixing it? I don't know if we say we want to fix it, but let's keep trying to find a better way for kids," he said. "They're going to classes in September, October, November, and then they start checking out. We've got to do something about that."

According to Livers, he and Matthews had been working through their ailments the past couple weeks, with Livers spending most of his time doing limited rehab.

Both Livers and Matthews were full participants in Monday's portion of practice that was open to the media.

"They're back but in the meantime other guys got a chance to play (in practice)," Beilein said. "We feel excited about them, but it sort of has led to maybe where we're going to play some people. It could change at any minute whether it's injury or somebody just starts playing well."

… Beilein said he hasn’t noticed his summer flirtation with the Detroit Pistons having an impact — for better or worse — on the recruiting trail.

“I'm sure people could use it negatively against us that I was trying to leave,” he said. “We also will say if the Pistons thought I could do it at that level then I think you should think that we're pretty good at preparing you for it. We always try to put a positive spin on it.”