Former Michigan hockey player Scott Matzka, a member of the 1998 national-championship team who assisted on the winning goal, died after battling Lou Gehrig's Disease. He was 40.

Hockey sticks mark the scene of the tragic Humboldt bus accident, which claimed the lives of 16 members of the Canadian junior-hockey team. For a look back at the notable sports deaths of 2018, scroll through the gallery. Associated Press
Fullscreen

Penny Marshall, award-winning actress, film director and big-time sports fan (Lakers, Dodgers) who also directed "A League of Their Own," due to complications from diabetes. Dec. 17. She was 75. Robin Buckson, Detroit News
Fullscreen

Ron Johnson, former Michigan running back and the Wolverines' first African-American captain, from complications from Alzheimer's Disease. Nov. 10. He was 71. Detroit News
Fullscreen

Wally Triplett, former Lions running back and the first African-American to be drafted and play for an NFL team. Nov. 8. He was 92. Detroit News
Fullscreen

John Ziegler Jr., former NHL president who oversaw the merger with the World Hockey Association and a Grosse Pointe native who began his sports career in the Red Wings front office. Oct. 26. He was 84. Associated Press
Fullscreen

Tex Winter, pioneer of the innovate "Triangle Offense" and assistant on NBA championship teams with the Bulls and Lakers. Oct. 10. He was 96. Ed Zurga, Associated Press
Fullscreen 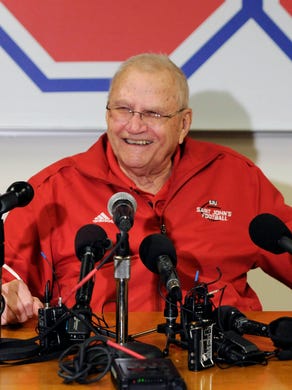 Don Welke, long-time MLB scout who specialized in Michigan and Midwest prospects and also coached baseball at Eastern Michigan and Concordia. Sept. 19. He was 75. YouTube
Fullscreen

Richard DeVos, owner of the NBA's Orlando Magic and founder of Amway, from complications from an infection. Sept. 6. He was 92. Stephen M. Dowell, Orlando Sentinel
Fullscreen

Jim "The Anvil" Neidhart, former professional wrestler with the WWE and a member of the famed Hart Foundation, from a fall out at his home. Aug. 13. He was 63. WWE
Fullscreen

Stan Mikita, long-time captain of the Chicago Blackhawks who played for the team for 22 years, from complications of Lewy body dementia. Aug. 7. He was 78. Julien LeBourdais, Associated Press
Fullscreen

Walter Bahr, soccer legend who was part of the 1950 U.S. team that stunned England in the World Cup, from complications of a broken hip. June 18. He was 91. Drew Hallowell, Getty Images
Fullscreen

Dwight Clark, former NFL receiver (who made "The Catch" with the 49ers), of complications of Lou Gehrig's Disease (ALS). June 4. He was 61. Phil Huber, Associated Press
Fullscreen

Jack Seibold, former Michigan State swimmer and diver and author of "Spartan Sports Encylopedia." May 8. He was 89. MSU athletics
Fullscreen

Earl Bruce, former college football coach (including at Ohio State), from complications of Alzheimer's. April 20. He was 87. Associated Press
Fullscreen

Bill Rademacher, former NFL player and college coach (including at Northern Michigan and Michigan State). April 2. He was 75. Find a Grave
Fullscreen

Bud Olsen, former NBA player (including with Detroit Pistons). March 12. He was 77. Find a Grave
Fullscreen

Clyde Scott, former NFL player (including with Detroit Lions) and Olympic medalist. Jan. 30. He was 93. Find a Grave
Fullscreen

Julio Navarro, former major-league pitcher (including with Tigers), complications from Alzheimer's. Jan. 24. He was 82. Via Amazon.com
Fullscreen

Former Michigan hockey player Scott Matzka, a member of the 1998 national-championship team who assisted on the winning goal, died after battling Lou Gehrig's Disease. He was 40.

"Scott was a great player, tremendous teammate and true champion," Michigan head coach Mel Pearson, an assistant coach during Matzka's career (1998-2001), said in a statement. "My thoughts and prayers are with the Matzka family during this difficult time."

A forward, he played professionally for 12 years after his Michigan career, including in the AHL, ECHL and in Europe. He had stints with the Grand Rapids Griffins and Kalamazoo Wings.

After being diagnosed with amyotrophic lateral sclerosis (ALS) in 2015, he created the "My Turn" foundation to raise awareness about the disease.

In 2016, he wrote about his battle for The Players Tribune, saying, in part:

"This disease can do a lot of terrible things. But it won’t erase my memories, or the thought of my wife and kids smiling. I will never forget our trip to Traverse City the weekend after I was diagnosed. The pictures we have will never degrade.

The irony of ALS is that while it destroys your body, your mind remains as sharp as ever. Those moments are moments I’ll never forget — this disease will not take that away from me.

I love my wife and kids so much. I love my family and friends so much. This disease may silence me, but it cannot silence all of us."

He also was the subject of a documentary, "'My Turn, The Film," released earlier this year.