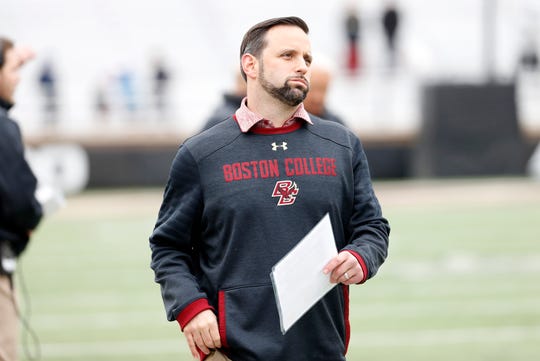 New Michigan defensive assistant Anthony Campanile signed a two-year contract that will pay $415,000 annually, but there are some interesting caveats designed to limit his departure to a Big Ten school.

Campanile joins Jim Harbaugh’s staff after working last season at Boston College as co-defensive coordinator. He signed a memorandum of understanding last Friday, according to his MOU obtained by The Detroit News through an open-records request.

His position has not yet been assigned. He could coach linebackers or safeties.

Those are the nuts and bolts but the proverbial small print is where the contract gets interesting. Campanile will owe Michigan 25 percent of his salary if he leaves for another assistant coaching job before his Michigan contract expires.

But here’s where it gets more punitive — if he leaves for an assistant coaching position within the Big Ten, he will have to pay Michigan 50 percent of his salary.

Campanile won’t have to pay a buyout if he leaves to become defensive coordinator outside the Big Ten East Division — except Rutgers. Campanile is from New Jersey and is a Rutgers alum. There is no penalty if he would leave for a coordinator job in the West Division.