Michigan coach talks about Iowa and what he's seen from the Hawkeyes heading into Friday's game at Carver-Hawkeye Arena. The Detroit News

But defensively? The Wolverines seemingly haven’t skipped a beat all season.

If there’s a time No. 5 Michigan (20-1, 9-1 Big Ten) could ill-afford to lose its defensive footing, Friday’s trip to Iowa to face one of the Big Ten’s top offensive attacks would certainly qualify.

The numbers don’t stop there. Iowa ranks No. 10 nationally in KenPom’s adjusted offensive efficiency (118.5 points per 100 possessions) and has scored a season low of 66 points — a total only three teams have been able to top against Michigan’s second-ranked defense.

On top of that, the Hawkeyes return all the key pieces from last season’s team that finished among the nation’s top-20 most efficient offenses.

“They’ve got talent everywhere,” Beilein said. “They’re older. They have a plan. They have really done a good job of playing off each other a lot.

“Everybody one year later; it's incredible what you don't have to teach anymore and then you can move on to better detail. First you just teach the nuts and bolts of it, and that's where they were last year.”

This year, Iowa is one of the few teams that boasts a balanced offense like Michigan, with all five starters — forwards Tyler Cook (16.6 points) and Luka Garza (14.8 points) and guards Joe Wieskamp (11.2 points), Jordan Bohannon (10.4 points) and Isaiah Moss (10.2 points) — averaging double digits in scoring.

The Hawkeyes are also one of the best at getting to the free-throw line and have a reliable bench with forwards Nicholas Baer and Ryan Kriener, and guard Connor McCaffery, playing key roles for Iowa coach Fran McCaffery.

But the one difference that has Beilein wary is the emergence of Garza’s perimeter shooting.

"Last year when we went there earlier in the year … it was we’ve got to stay in front of him, but it was never, ‘Hey, we really have to get to his 3-pointer or even his 15-footer,’” Beilein said of Garza. “Then we played them here, he made some. Then in the Garden (for Big Ten tournament) he was really good shooting from distance. 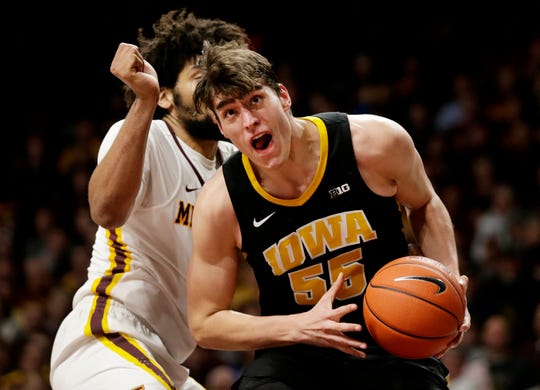 “That's a big difference when you have a big who can score in the post, has a great feel with his back to the basket and can also hit a little porch shot that is a 15-footer or something in the middle of the lane where he's automatic. That's a different thing that puts us into some quandaries that we've got to figure out.”

And if all that isn’t enough, Beilein added the Wolverines will also have to find a way to slow down the Hawkeyes’ tempo and not be caught flat-footed in transition.

“They’re flying the big man up the floor. You watch every game and they’ll get it again,” Beilein said. “They'll pitch it in to the big man who will make a catch over his shoulder and lay it in. And we'll be yelling at one of our guards who was supposed to be back.

“Well if one of our guards drives it and the other guy waits for one minute in the corner to see whether the ball went in, they're going to get one at the other end. They take it out quick and they're gone. So, what they have is a whole bunch of guys who can do that.”

Yet, the Wolverines have a whole bunch of guys who can clamp down and make life miserable for the opposition in a matchup that will pit strength against strength.

With six road games ahead for Michigan in the second half of conference play, it all starts with one of the toughest.

“I always tell our team I don't remember many home games. There's just a few, but the road wins you have because there's only truthfully maybe four to eight a season you're going to have in a good year,” Beilein said. “Those are special as opposed to 17 or 18 home wins you might have if you're having a good year.

“I think we've got to look at every day as an opportunity to be better as a team and win big games, especially road games.”

Outlook: Iowa ranks second in the Big Ten in scoring (82.2 points), free-throw percentage (75.5 percent) and assists (16.9), and leads the nation in made free throws (416). … Michigan has lost four of five at Carver-Hawkeye Arena. … With a win, John Beilein will become the program’s all-time Big Ten wins leader and break a tie with Johnny Orr (120 victories).