John Beilein, Michigan prefer Jordan Poole not to be so deep when it comes to 3-pointers

For Michigan, the issue isn't that Poole is taking 3-pointers, but where he's taking them.

John Beilein, Michigan prefer Jordan Poole not to be so deep when it comes to 3-pointers

Michigan coach John Beilein talks about his team's performance in Friday's loss at Iowa and looks ahead to his team's second straight road game. The Detroit News 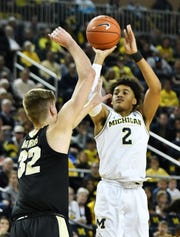 Ann Arbor — Ask sophomore guard Jordan Poole if he prefers to play against a zone or man defense, he doesn’t hesitate to answer.

It’s wherever he can get an open shot.

Michigan coach John Beilein wouldn’t disagree. What Beilein might not agree with, though, is the distance of Poole’s attempt.

“One of Jordan's issues is where he's shooting,” Beilein said Monday. “He’s open, but he doesn’t need to be standing at the NBA line to shoot them. He's got to continue to move in closer to the line and his shooting numbers in practice drills and things like that, which are harder than games, are incredible. But he also shoots at the line.

Beilein added in a recent shooting drill where Poole was on the move, he made 20 out of 25 3s at the college line.

Poole’s unnecessarily long attempts are reflected in his recent shooting numbers. Entering play Tuesday, he was connecting at 27.7-percent clip (13-for-47) from 3-point range over the past eight games.

For Poole, the solution to his spatial awareness problem sounds like a simple fix.

“Just get closer to the line,” he said with a smile. “I think that's really all it is to it. I never really look at the line when I'm in the game. I just try to find a spot where I'm open.”

Beilein said the issue is a player’s “GPS,” and it’s something they’re trying to recalibrate with Poole through film and in practice.

“There's some players that their GPS it just takes time to adjust it. They just have this feel of where they should be and it's really hard,” Beilein said. “(Sunday) we had (assistant coach) DeAndre (Haynes) standing on the sideline right behind Jordan attacking a zone and just pushing him if he was out at all. I mean seriously. He's not saying, 'Heck with you, Coach. I'm going to stand over here.' It's the GPS thing people will go through.”

Poole noted he tends to drift out farther away from the arc against a zone defense to get more space because of the way he’s guarded. Since most teams know he can shoot from anywhere on the floor, defenders tend to play above the line and that takes away passing angles.

“There aren't direct passes where I'm able to catch it and shoot it. It's a pass where I got to catch it to get open,” he said. “But you also don't want to move around so much where you disrupt the offense. It's just things we've got to learn and figure out the windows and what not.”

While Poole is guarded differently and more honestly in man-to-man situations, he is still prone to hoist a deep shot due to the step-back he added to his repertoire this season.

Much like he scans a zone for openings, Poole busts out his defender-shedding move to create separation and get a better look for a shot — regardless of where the 3-point line is.

“I've been practicing the step-back all summer, so it's something that you do over a period of time where it naturally comes rather than, 'All right, I'm going to do the step-back now,’” he said. “It just kind of naturally happens.”

The next natural step, Beilein hopes, is one closer to the college 3-point line.