‘He fights for us’: Michigan players cool with John Beilein’s fire

‘He fights for us’: Michigan players cool with John Beilein’s fire

John Beilein talks about how Maryland's young team reminds him of Michigan's 2013 team that reached the national title game. The Detroit News 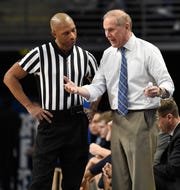 After being ejected at the end of the first half in Tuesday’s loss at Penn State, Beilein contacted the Big Ten office this week to get an explanation and give his side of the story.

It was only the second time in Beilein’s 44-year career he was tossed from a game and believed to be the first time since he coached at Erie (N.Y.) Community College in 1978-79.

"I've had several conversations via text, via phone,” Beilein said on Friday. “I think we'll have to wait another (40) years before we see that. I hope you wait a couple years before you see another technical, let alone that. It was a lot of surprise to the whole deal and what happened, happened. It was unfortunate.”

Beilein didn’t divulge much from his conversations with the Big Ten coordinator of officials Rick Boyages and declined to say whether he thought his dismissal was justified.

Beilein said the reason he called the league office, though, was to get an interpretation of how and why things got out of control so quickly with officials Paul Szelc, Lewis Garrison and Rob Riley.

“Just have them make sure they look at the film so that everybody gets educated in that, not just the coaches. I trust we do that,” Beilein said. “I think we educate our officials and we work at that to say, 'This should be a call. This shouldn't be a call.'

“There's going to be missed calls. If there's egregious ones, then they have to be addressed in a different manner. The coaches always have to answer this, the officials don't. That's a difficult thing, but the officials are doing the best they can.”

What got Beilein fired up was the final play of the first half, when junior guard Zavier Simpson was knocked down by a perceived illegal moving screen that freed up Penn State’s Rasir Bolton for a last-second layup.

Assistant coach Saddi Washington confirmed after the game it was the non-call on Simpson that drew Beilein’s outrage and he was trying to get clarification before he was hit with two successive technical fouls.

“I think when I receive a technical that's when it's probably most dangerous because if I receive a technical I want to know why right away and then probably my mother's Irish side comes out of me a little bit,” Beilein said. “But I try to avoid those like the plague — getting a technical. I've got to be better than that. I've got to be better than the officials. I pride myself on doing that, but I wasn't."

None of Michigan’s players were aware Beilein had been ejected until they were notified in the locker room during halftime.

But when they heard the news, junior center Jon Teske said it sparked a little bit of a fire underneath the team.

“I saw after the game X got hit on a screen,” Teske said. “I mean, (Beilein) is fighting for us. He loves us. He's going to coach us up to the best of our ability. I didn't really see what happened after that because we were all going to the locker room. But we just wanted to go out there in the second half and play for him." 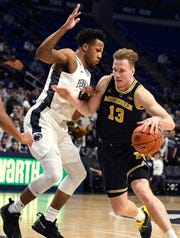 However, Beilein didn’t give a rousing or moving speech during the break and didn’t deviate from his typical halftime routine after his ejection.

When he did talk to his players, though, one of the first things he did was apologize.

“I said I'm sorry about that because I knew there would be foul shots coming up and that we couldn't do that,” Beilein said. “I think they also understood that this doesn't happen very (often). It's unique. It's not a recurring problem and I may have been doing something that maybe might help them, too. I don't know.

“I didn't do it intentionally. I wasn't like, 'Oh, I'm going to fire up my team.' It wasn't a ‘Hoosiers’ toss me deal. It blew up so fast that it was over before I could even do anything about it.”

Still, freshman forward Ignas Brazdeikis didn’t mind Beilein’s reaction when he saw video of his coach being tossed at halftime. In fact, Brazdeikis appreciated it.

“It was such an emotional game and just seeing that shows how much he cares about us and how much he loves the team and how much he loves winning,” Brazdeikis said. “I feel like we need to embrace that, and I respect him even more for that. He fights for us till the end and that means the world. I’ve never seen that from him before, so it was kind of cool.”

But, according to Beilein, don't expect to see him lose his cool like that anytime soon.

“I hope it never happens again,” he said. “I don't think it ever will. It should never happen again.”

There will be a few familiar faces in the Crisler Center crowd for Saturday’s game.

Former Wolverines Moritz Wagner, Muhammad-Ali Abdur-Rahkman and Duncan Robinson will on be on hand to watch No. 6 Michigan take on No. 24 Maryland.

Wagner (L.A. Lakers), Abdur-Rahkman (Canton Charge) and Robinson (Miami Heat/Sioux Falls Skyforce), who were all part of last season’s team that reached the national title game, are all on break from their respective NBA and G-League teams thanks to All-Star weekend.

According to Beilein, the trio took in Thursday’s practice and got in a workout Friday with strength and conditioning coach Jon Sanderson.

“It's a good thing when you've got guys who were just with us in so much,” Beilein said. “They were in Camp Sanderson last time I saw, so that means they're excited about their pro career and taking these off days to get better.”

Teske said the team hung out with Wagner, Abdur-Rahkman and Robinson on Thursday and went out for dinner.

“It's good that they're willing to come back,” Teske said. “I'm excited to play in front of them.”

Outlook: Maryland is led by guard Anthony Cowan Jr. (16 points) and big man Bruno Fernando (14.6 points, 10.7 rebounds). The Terrapins are the only Big Ten team that ranks in the top five in scoring offense (73.6 points, fifth) and scoring defense (64.6 points, fourth)…This is the first time in the series both teams will be ranked in the top 25…Michigan is 5-0 against ranked teams this season…Michigan will wear pink Jordan shoes to bring awareness for breast cancer and honor survivors.