Along with the spring game, there will be another undefined event at Michigan Stadium on April 6. 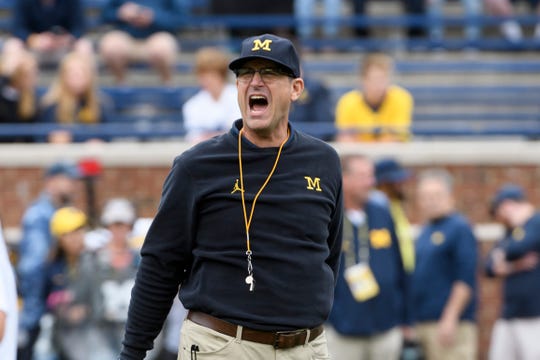 According to the Harbaughs' Podcast page Monday, Michigan will have a spring game this year. Last year, the spring game was canceled. (Photo: David Guralnick, Detroit News)

The forging of a new football team begins during spring practice, and fans typically get an early preview of their team in a spring game.

Michigan reportedly will hold a spring game April 13 at 5 p.m, according to a tweet from The Harbaughs' Podcast page on Monday. Along with an interview with new quarterbacks coach Ben McDaniels that will post on Tuesday, Michigan coach Jim Harbaugh apparently announces the spring game along with an undefined event at Michigan Stadium on April 6.

The Michigan Football twitter account retweeted the Harbaughs' Podcast and indicated to "mark your calendars" and that additional information and details will be coming soon.