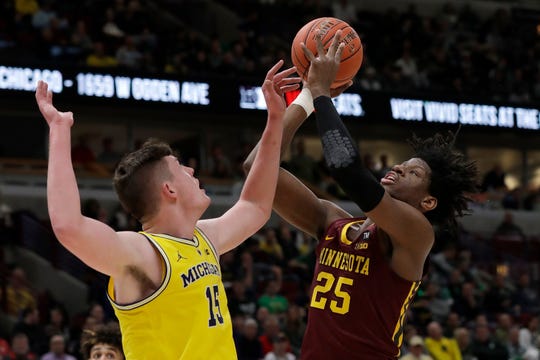 Michigan dominated Minnesota from start to finish in Saturday's 76-49 victory that'll set the Wolverines up a date with Michigan State in Sunday's Big Ten tournament final.

Minnesota hung in to start the game, but Michigan put its foot on the gas to end the first half with a 25-6 run that put the game away before the two teams head into their respective locker rooms.

Isaiah Livers had a career high 21 points on 8-for-10 shooting, Zavier Simpson had 15 and nine assists, and Brazdeikis scored 13.

Michigan bench closing things out late in second half

Amir Coffey lays in a basket for Minnesota at the other end. Jarvis Omersa adds a bucket for Minnesota with a layup on the Gophers' next possession. Coffey follows that up with another layup.

Matthews breaks up the Gophers' 6-0 run with a nice Euro step in the paint before dropping in a jumper. Michael Hurt then hits a jumper for Minnesota, making it 76-48, Michigan.

Stay hot, Isaiah Livers. He bangs home a 3-pointer and Michigan's lead is now at 29.

You wanna know how Minnesota's day is going? Jordan Murphy caught a pass in the paint, made a textbook power move to get position on Teske inside, and missed the dunk.

Livers then sends home two more 3's. He's got a game-high 21. Gabe Kalscheur answers with a 3-pointer for Minnesota. Eli Brooks lays in a basket for Michigan. It's been an eternity since somebody blew a whistle.

And there's the stoppage in play. Brooks hits a layup and gets fouled in the process; he'll shoot a free throw after after the break.

With a short shot clock, Isaiah Livers dishes to Zavier Simpson, who hits a 3-pointer as the buzzer sounds. MIchigan leads, 50-30. On Michigan's next possession, Livers hits from deep.

Jarvis Omersa is stripped by Charles Matthews, Matthews gets it to Simpson, and Simpson dishes to Livers on the fast break, who finishes at the rim and draws a foul. Livers makes his free throw. Michigan leads by 26 and is in a 9-0 run.

Amir Coffey breaks up the run with a layup. Michigan misses on its next possession, but Poole steals at the other end and kicks it to Livers for an easy fast-break bucket. Michigan leads 58-32.

Coffey gets to the basket again and he's got 10 points for Minnesota now. Ignas Brazdeikis responds with a layup for Michigan.

Minnesota's offense awakens, but Michigan's is matching it

Jon Teske turns it over to start the half. Jordan Murphy returns the favor with a travel on the other end.

Zavier Simpson drills a 3-pointer to extend the Wolverines' lead to 22. Simpson currently leads all scorers with 12.

Murphy puts in a one-handed jumper from inside the paint for Minnesota; Charles Matthews lays it in on the other end.

Daniel Oturu follows up Matthews' bucket with a layup of his own, but on the Wolverines' next possession, Teske throws down a dunk.

Dupree McBrayer hits the Gophers' first 3-pointer of the game, but Minnesota can't get a stop on defense — Brazdeikis hits a layup to make it 47-28.

Now it's Amir Coffey scoring for the Gophers inside.

Michigan ends first half on a 25-6 run

The Wolverines extend their run to 11-2 with another basket by Ignas Brazdeikis. Zavier Simpson does Zavier Simpson things on the next possession and gives Michigan a 26-15 lead.

Livers then throws down a dunk from the baseline, and Minnesota needs a breather.

Daniel Oturu is called for a double dribble.

Jordan Murphy ends Minnesota's scoreless streak with a jump shot. On the other end, Charles Matthews answers with a layup.

Jon Teske gets a fortunate roll on a 3-pointer from the center of the arc to put Michigan up, 36-17. Murphy adds another basket for Minnesota on the Gophers' next possession.

Hey, as long as it goes in. pic.twitter.com/COedfAXiNY

Daniel Oturu will shoot a pair of free throws after the timeout, with the foul assessed to Jon Teske. He misses both and commits a foul of his own.

Dupree McBrayer makes a nifty move on a fast break to beat Charles Matthews at the basket and hit a reverse layup. It's 11-8, Michigan.

Amir Coffey nails a short jumper over Isaiah Livers. On the other end, we have a Zavier Simpson skyhook check: 0-for-1.

Gabe Kalscheur fights inside and earns a pair of free throws. He makes one of two, tying to game at 11. Simpson hits a hook shot on the other end to regain the lead.

Kalscheur makes a nice move inside to get an open look and tie things up at 13. Livers gets the lead right back for Michigan with a long 2-pointer.

Eli Brooks challenges Jarvis Omersa at the rim and is called for a foul. Omersa misses both.

Ignas Brazdeikis gets back in the action with a clean-looking jumper that falls through. Michigan forces a turnover two Minnesota possessions later, and Simpson gets it up quickly to Brazdeikis for a two-handed dunk.

Oturu fights to the basket and lays in a basket. On the other end, Jordan Poole drills a 3-pointer off glass.

Michigan's Ignas Brazdeikis gets the game's first points, a 3-pointer. Daniel Oturu responds for Minnesota with a long jumper that makes it 3-2, Michigan.

Brazdeikis blocks Jordan Murphy in the paint and then kicks it up the court, where Jordan Poole eventually finishes with a layup. Poole then scores on a layup two possessions later, making it 7-2.

Murphy responds for the Gophers with a spin and layup inside. Poole continues his work inside the paint on the other end with some crafty footwork that leads to another layup and a 9-4 Michigan lead.

Amir Coffey helps match the Wolverines' pace with a jumper; Charles Matthews hits for 2 after grabbing a rebound on a missed 3-pointer by Poole.

Michigan hopes to take another step toward its third consecutive Big Ten tournament championship in a semifinal matchup against Minnesota on Saturday at 3:30 p.m. Minnesota advanced with an upset over Purdue on Friday night.

Follow the action throughout the game with live updates by Nolan Bianchi of The Detroit News.