Michigan sits one victory away from becoming the first Big Ten team to three-peat in the conference tournament.

Chicago — One day after making history for the longest win streak in the Big Ten tournament, Michigan will have a shot to make some more.

Michigan sits one victory away from becoming the first Big Ten team to three-peat in the conference tournament after hammering Minnesota, 76-49, in Saturday’s semifinals at the United Center. 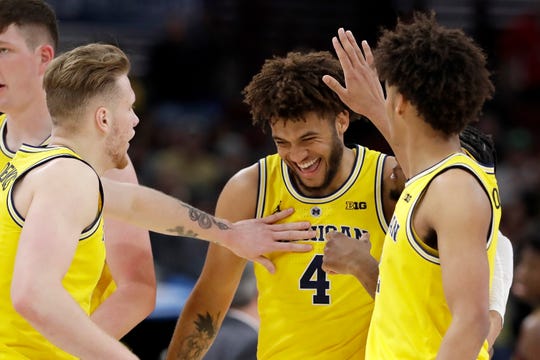 Michigan's Isaiah Livers is congratulated by his teammates after a dunk in Saturday's win over Minnesota. (Photo: Nam Y. Huh, Associated Press)

Michigan (28-5) will face Michigan State, a 67-55 winner over Wisconsin, in the championship game at 3:30 p.m. Sunday. It’ll mark the second straight weekend the rivals will meet with a title on the line and third meeting between the teams this season.

Sophomore forward Isaiah Livers made sure there'd be a Round III by racking up a career-high 21 points, while junior guard Zavier Simpson added 15 points and nine assists and freshman forward Ignas Brazdeikis scored 13 in a game that turned into a laugher in a hurry.

"It's the perfect scenario," Livers said. "It's how I had it perfectly planned coming into this tournament. I didn't overlook any game. I took every game one by one. God has given us a gift.

"I don't like losing to a team and saying we play Michigan State and we never got the chance to play them again. I like getting another chance to play them before the season is over. I don't want them to go back home and say they're 3-0 against Michigan. I want to get a win."

Amir Coffey scored 14 and Jordan Murphy 10 for Minnesota (21-13), which trailed by double digits over the final 26:29 of the game and lost to Michigan for the third time this season.

Roughly 18 hours after dismantling Iowa in the quarterfinals, Michigan went right back to work with another sterling two-way effort to build a double-digit advantage it would never relinquish.

After the Gophers pulled even at 13 with 10:52 left in the first half, the Wolverines dominated the rest of the way and took complete control with a 25-6 run.

Michigan's Jon Teske blocks a shot by Minnesota's Daniel Oturu during the first half of the semifinals of the Big Ten tournament. Nam Y. Huh, Associated Press
Fullscreen 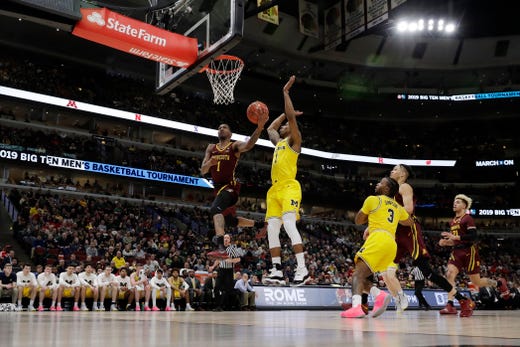 Minnesota's Dupree McBrayer, left, goes up for a basket against Michigan's Charles Matthews during the first half. Nam Y. Huh, Associated Press
Fullscreen 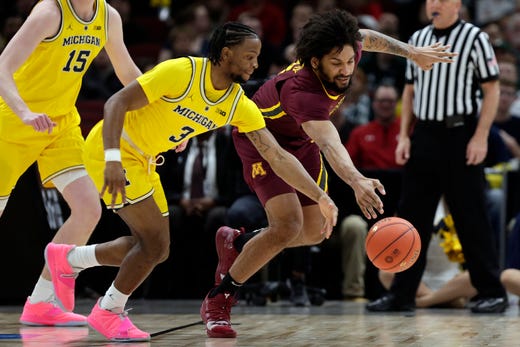 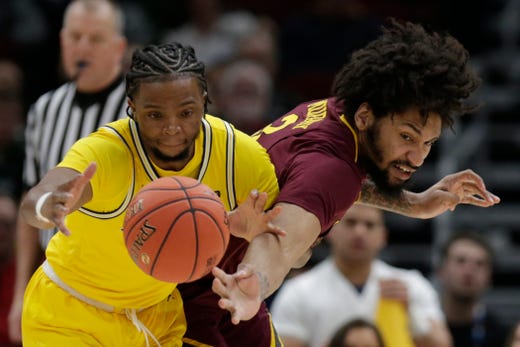 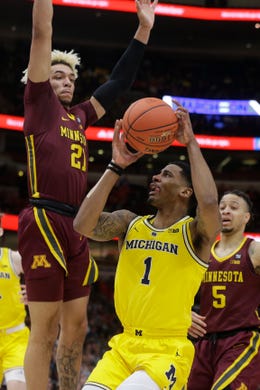 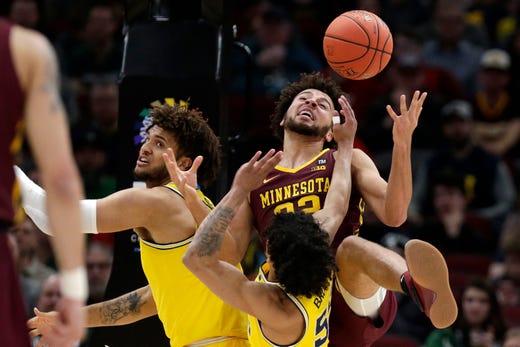 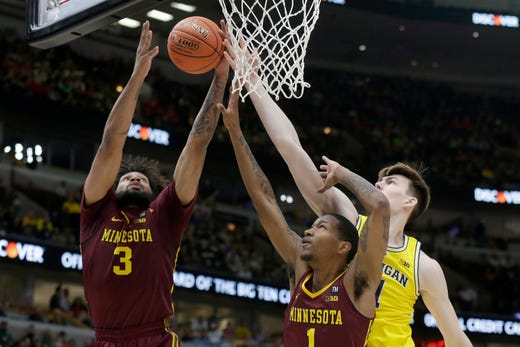 Minnesota's Jordan Murphy (3) and Dupree McBrayer and Michigan's Colin Castleton battle for a rebound during the first half. Kiichiro Sato, Associated Press
Fullscreen 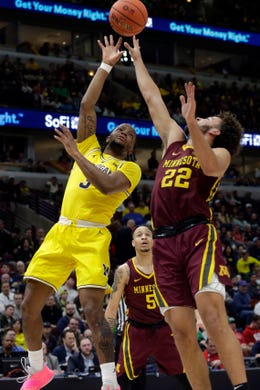 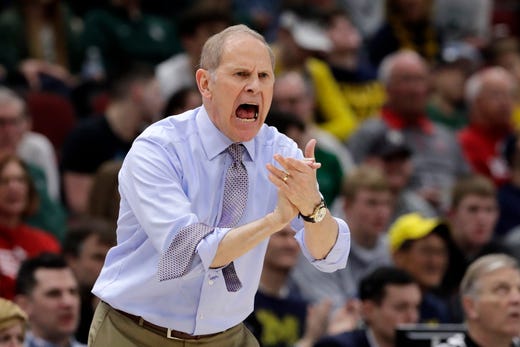 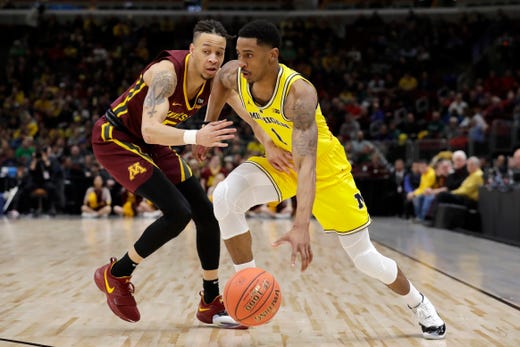 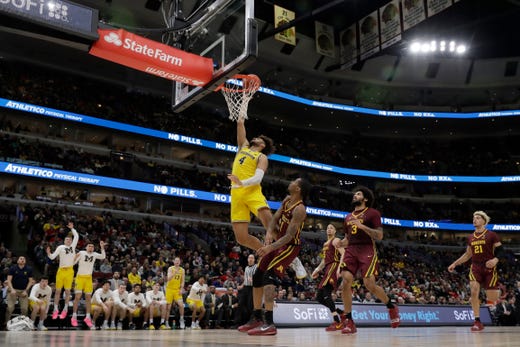 Michigan's Isaiah Livers goes up for a layup against Minnesota's Dupree McBrayer during the second half. Nam Y. Huh, Associated Press
Fullscreen 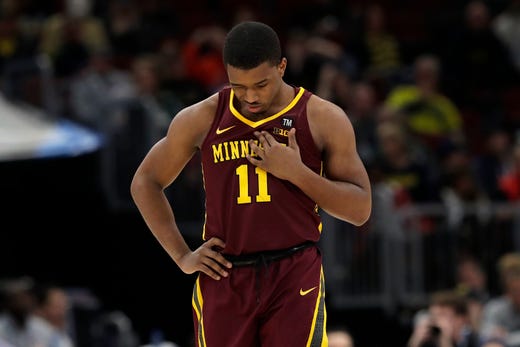 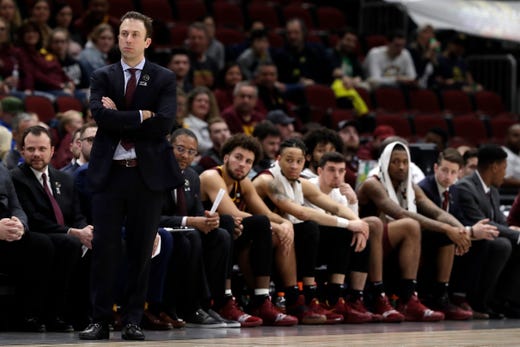 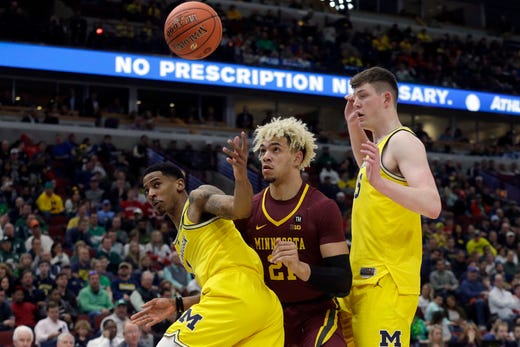 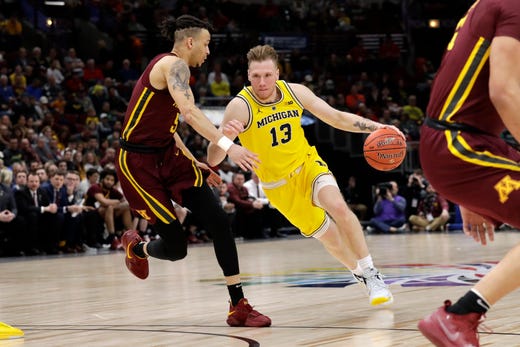 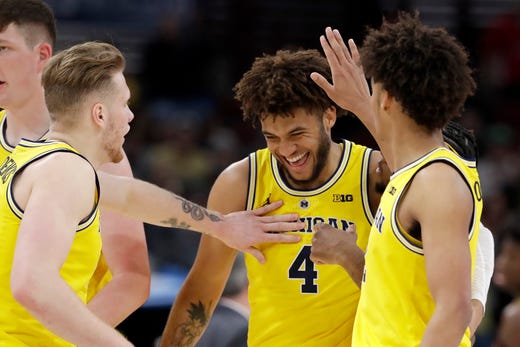 Michigan's Isaiah Livers is congratulated by his teammates after a dunk in Saturday's win over Minnesota. Nam Y. Huh, Associated Press
Fullscreen

Livers started the decisive spurt with a mid-range jumper and Brazdeikis followed with a jumper and fast-break dunk to make it a six-point game.

Minnesota’s Daniel Oturu briefly stopped the bleeding with a layup before the Wolverines continued to pour it on. Sophomore guard Jordan Poole banked in a 3-pointer and Simpson buried a deep ball of his own during a string of 12 straight points that gave Michigan a 31-15 lead at the 3:34 mark.

Just to prove everything was going Michigan’s way during the flurry, junior center Jon Teske had a 3-pointer bounce off the back rim and in and Simpson went coast-to-coast with a buzzer-beating, left-handed layup to push the bulge to 38-19 at the break.

And Michigan’s defense was stifling throughout the game-turning run as Minnesota could only connect on three of its final 12 shot attempts in the half.

"We're having fun out there," Poole said. "We're playing with confidence by being able to swing the ball and guys were able to knock down shots. We're also playing defense and we're able to get in transition, and that's opening everything up from inside the paint to open up the outside. Being able to frustrate the other team and get easy shots is huge."

Much didn’t change over the final 20 minutes, even when Minnesota made five straight shots to open the second half. The Gophers simply had no answer for the Wolverines.

Michigan finished things off with a 22-6 run where Livers went to work and scored 17 points — a mark that alone tied his career high. He drained four 3-pointers, converted a three-point play and scored on a fast-break layup during the scorching stretch that put the Wolverines up, 69-36 with 7:31 to go.

"They were really, really good today," Minnesota coach Richard Pitino said. "We were not very good. We get going offensively and we get energy, enthusiasm, and today couldn't hit shots in the first half. That really, really affected us, and you could just tell we totally ran out of gas."

Michigan led by as much as 35 down the stretch to ride yet another convincing victory one step closer to another tournament title.

And all that stands in the way is a familiar roadblock.

"We're playing for a championship and it just happens to be Michigan State," Poole said. "We're excited. They're a great team, but we're trying to make history."