Oddsmakers: Michigan football an early favorite in every game next season

Michigan is a favorite in every game next season, including rivalry games against Notre Dame, Michigan State and Ohio State.

Oddsmakers: Michigan football an early favorite in every game next season 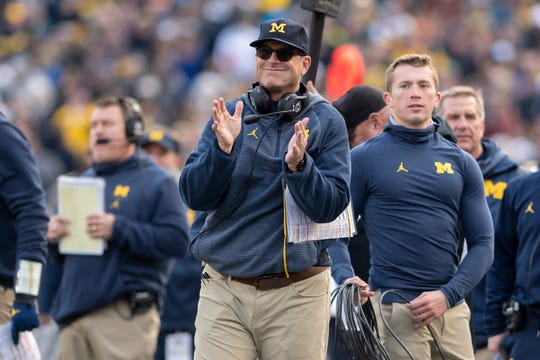 It's early, but Jim Harbaugh's Michigan football team is favored in every game next season, including Ohio State. (Photo: David Guralnick, Detroit News)

File this in the “Way Too Early for College Football Odds” file, but here it is, just a couple of days before the NCAA Tournament kicks off in earnest, and Vegas is supplying betting lines for the upcoming football season.

And Michigan, coming off a 10-3 season that ended with consecutive losses at Ohio State and the bowl game, is getting a lot of love. That's probably in large part because of new offensive coordinator Josh Gattis, who is promising a more up-tempo offense. He launched his arrival in Ann Arbor with a Twitter hashtag, #speedinspace, that got everyone talking.

Everyone, apparently, including Vegas oddsmakers

The Wolverines are large favorites in their biggest games, according to odds set by BetOnline.

Michigan is favored by 8.5 against Notre Dame, by 13 against Michigan State and by 6.5 against Ohio State. All three will be played at Michigan Stadium this season.

The Wolverines lost their season opener to the Fighting Irish last season, 24-17, and were trounced in their regular-season finale, 62-39, in Columbus. In between, Michigan handled Michigan State in East Lansing, 21-7.