Recap: Michigan cruises past Montana, 74-53, in first round of NCAA Tournament

Recap: Michigan cruises past Montana, 74-53, in first round of NCAA Tournament 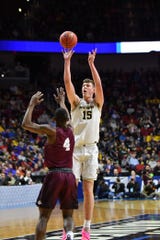 Michigan's round-of-64 performance against Montana was a lot stronger than it was a year prior, as the Wolverines jumped out to an early lead and never looked back on their way to a 74-55 win in Des Moines, Iowa Thursday night.

Michigan will play the Florida Gators on Saturday, with the winner earning a trip to the Sweet 16.

All of Michigan's starters have left the court except Charles Matthews and Jordan Poole. Poole exits after making two quick free throws.

Donaven Dorsey hits a 3-pointer for Montana. Brandon Johns Jr. gets 2 points in the paint.

Matthews then heads to the bench, as do most of Montana's starters.

Mack Anderson hits a pair of free throws for Montana, Timmy Falls follows it up with a 3-pointer.

Charles Matthews draws a shooting foul and, after making both free throws, has 22 points.

Ignas Brazdeikis flexes after using his strength to get up a bucket in the paint. Ahmaad Rorie makes a layup on the other end, and the entire Montana bench flexes in Bradeikis' face while the Michigan freshman jogs back down the court. Michigan leads by 24.

Charles Matthews hits both free throws. He has a game-high 18.

Bobby Moorehead drills a 3-pointer for Montana, making it 50-35. Jon Teske responds for the Wolverines with a basket that beats the shot clock by a fraction of a second.

Isaiah Livers' third foul of the game will send Michael Oguine to the line for a 1-and-1. Oguine misses. Then Timmy Falls is called for a foul on the other end, his fourth.

Ignas Brazdeikis will go to the line after getting fouled on a drive to the rim. He makes both.

Sayeed Pridgett hits a layup on the other end. Jordan Poole responds with a layup of his own, getting fouled on his way to the rim. He makes the ensuing free throw. Michigan leads by 20 for the first time this game.

A Teske steal leads to a Matthews layup.

Montana hanging in as Michigan looks for knockout punch

Timmy Falls gets to the rim with force and converts a layup after the break. Ahmaad Rorie draws a foul, gets to the free throw line on Montana's next possession. He makes it 44-30.

Michigan commits its 10th turnover of the game moments later and the Grizzlies have it again. Charles Matthews is called for a foul. Rorie misses from 3.

Simpson hits a textbook hook shot to give Michigan a 16-point lead.

Rorie gets the the free throw line again on the ensuing Montana possession. He makes both. It's 46-32.

Sayeed Pridgett and Ignas Brazdeikis verbally spar after Brazdeikis gets fouled and starts having some fun with the basketball after the play. Brazdeikis then makes both free throws.

Michigan takes largest lead of game after shaky start to half

Both Jon Teske and Ignas Brazdeikis miss inside on Michigan's first possession of the half.

Sayeed Pridgett makes it a 10-point game with a 3-pointer. Moments later, Michigan's Jordan Poole, who has yet to score, is called for an offensive foul.

Pridgett executes a gorgeous spin move around Teske and banks in a layup, making it 34-26.

Poole hits from 3 to give Michigan its double-digit lead back. Charles Matthews drills a jump shot on the Wolverines' next possession. He's 6 of 10 and the lead is back to 13.

Zavier Simpson draws two defenders down the baseline, finds Matthews cutting around the arc. Matthews hits from deep to make it 42-26, Michigan.

Teske forces a turnover on Montana's next possession and finishes with an alley-oop  thanks to Zavier Simpson.

The Wolverines are running away with it! 😯#MarchMadnesspic.twitter.com/RZteOgQs54

Just like that, Michigan takes its largest lead of the game with a 10-0 run.

Michigan heads into half up 13

Charles Matthews makes one of two free throws after the break. Donaven Dorsey hits from beyond the arc to make it 30-18.

Ignas Brazdeikis makes a beautiful effort to swipe a pass away from Montana, head the other way and throw down a powerful dunk. He got fouled at the end of the play but misses from the stripe.

Iggy shows off the HUSTLE to extend Michigan's lead to 14! 😤#MarchMadnesspic.twitter.com/el9nAuzty7

Michael Oguine hits an and-1 layup on the other end for Montana. He makes the free throw and cuts Michigan's lead to 11.

Isaiah Livers while head to the line, drawing a foul while Michigan is in the bonus. He hits both free throws. Michigan leads, 34-21.

Jordan Poole turns it over a possession later; the Wolverines have now turned it over eight times.

Matthews can't hit a deep ball at the buzzer and Michigan will head into the locker room up 13.

Montana heating up from field, cutting into Michigan's double-digit lead

Timmy Falls gets a shot off over Charles Matthews and cuts Montana's deficit to 21-8.

Jordan Poole gets the momentum right back for Michigan with an alley-oop to Ignas Brazdeikis on the other end.

Montana has it after the break. Zavier Simpson steals, makes a pretty pass to Matthews on the other end, which yields a foul. Matthews then beats the shot clock with a turnaround jumper that makes it 25-8.

Ahmaad Rorie hits a jump shot on the other end.

Bobby Moorehead is then fouled on a 3-pointer by Brazdeikis on Montana's next possession. He makes the last of three free throws. Rorie scores in transition a few moments later, cutting Michigan's lead to 12.

Brazdeikis makes a pair of free throws to make it 27-12. Sayeed Pridgett hits a nice layup on the other end for the Grizzlies.

Jon Teske throws down a dunk to make it 29-15, Michigan. Teske has seven points.

Michigan's Matthews yet to miss from field

Isaiah Livers misses his first deep shot of the game, but makes up for it with a block on Ahmaad Rorie on the other end. Jon Teske scores on the ensuing Michigan possession.

Livers misses another 3. Timmy falls can't finish with a layup for the Grizzlies.

Ignas Brazdeikis kicks it to Livers inside, Livers catches and fires immediately to Charles Matthews, who finishes with another layup. He's 4-for-4 with eight points.

Michigan is on a roll! They've jumped out to an early 21-6 lead over Montana! 🏀#MarchMadnesspic.twitter.com/NUu7lFpswL

Donaven Dorsey throws down a dunk to make it 10-4. Livers is called for a foul after Zavier Simpson turns it over.

Jon Teske finds Charles Matthews inside with a tight bounce pass that leads to a two-handed dunk. Eli Brooks gets on the board two possessions later with a 3-pointer that catches nothing but the bottom of the net. It's 15-4, Michigan.

Sayeed Pridgett hits a deep 2-pointer. Simpson responds with a nice layup on the other end.

Michigan wins the tip and we're underway. Teske is unable to finish inside on Michigan's first possession. The Wolverines quickly get it back with a stop, head the other way.

Teske hits the hardwood hard after getting fouled on his way to the rim. He misses both free throws.

Jordan Poole misses from deep. Charles Matthews puts home the rebound to put Michigan up, 2-0. Sayeed Pridgett responds with a bucket in the paint.

Ignas Brazdeikis hits a long 2-pointer. Poole misses another 3-pointer on the Wolverines' next possession, then it's Brazdeikis missing a triple moments later. Michigan is 0-for-3 from beyond the arc.

Teske hits from deep to give Michigan a 7-2 lead. Matthews' motor seems to be better at a higher level than it was a week prior in the Big Ten tournament, and he works inside for another Michigan bucket.