'The best is yet to come': Michigan returns to Sweet 16 after stifling Florida

No. 2 seed Michigan used a pair second-half runs and another tenacious defensive effort to grind past No. 10 Florida, 64-49.

'The best is yet to come': Michigan returns to Sweet 16 after stifling Florida

Des Moines, Iowa — Michigan needed a little luck and a last-second shot to make it out of the second round of the NCAA Tournament a year ago.

That wasn’t necessary this time around. 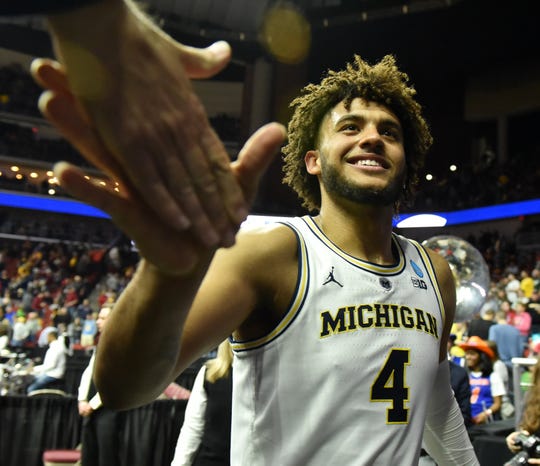 Instead, No. 2 seed Michigan used a hot second-half start and another tenacious defensive effort to take down No. 10 Florida, 64-49, on Saturday at Wells Fargo Arena.

Sophomore guard Jordan Poole finished with 19 points, sophomore forward Isaiah Livers added 10 points and junior guard Zavier Simpson flirted with a triple-double with nine points, nine assists and nine rebounds for Michigan (30-6), which held Florida to 28.6 percent shooting (8-for-28) in the second half and to its lowest point total of the season.

"These guys holding them to 49 points is incredible," Michigan coach John Beilein said. "That's how we won the game."

The Wolverines move on to the Sweet 16 for the the third straight season and the fifth time in seven years. Michigan will face the winner of Sunday’s game between No. 3 Texas Tech and No. 6 Buffalo on Thursday at the Honda Center in Anaheim, Calif. Tip-off time and TV designation is to be determined.

"It's amazing," Poole said. "Being able to see the very first Sweet 16 that they make, be a part of the second one and now being a part of the third one just shows which direction the program is going and how much hard work everybody puts in — the assistant coaches, the players, the people at the front desk.

"As a program it's something that shows we're really going in the right direction."

More: Wojo: For Wolverines, Spartans, no telling how far their rolls can go

More: Livers gets his turn in the spotlight in Michigan's win over Florida

After taking a four-point lead into halftime, Michigan came roaring out of the break and used an 11-0 run to open the second half.

Freshman forward Ignas Brazdeikis got things started with a friendly roll on a 3-pointer. Then after Michigan forced a five-second call, Poole capped the flurry with a three-point play and 3-pointer to make it 43-28 with 17:46 to play.

But when it looked like Michigan on the verge of blowing it open, Jalen Hudson snapped the run with a 3-pointer and a couple defensive breakdowns helped Florida answer with a 9-0 spurt to cut it to 43-37 at the 14:20 mark.

Poole briefly held off the Gators with three free throws — Michigan’s only points over a seven-minute stretch — while the Wolverines hit a 1-for-12 shooting slide. 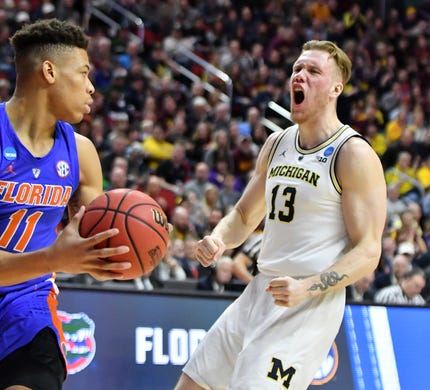 “There's definitely a process behind this. There's still a lot of time,” Ignas Brazdeikis said. “We've got the (NBA) combine still to go and there's a lot of different variables that will play into it." Robin Buckson, Detroit News
Fullscreen 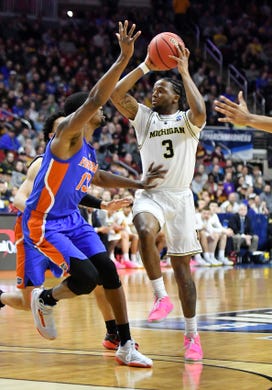 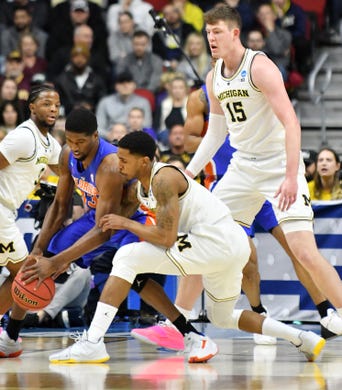 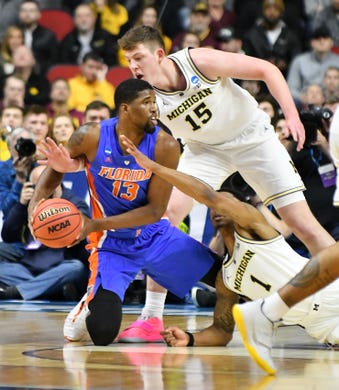 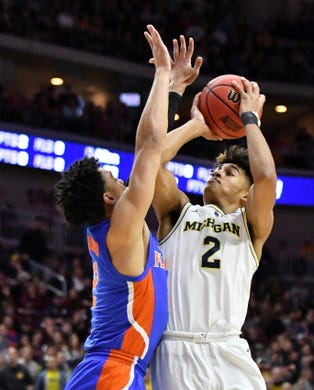 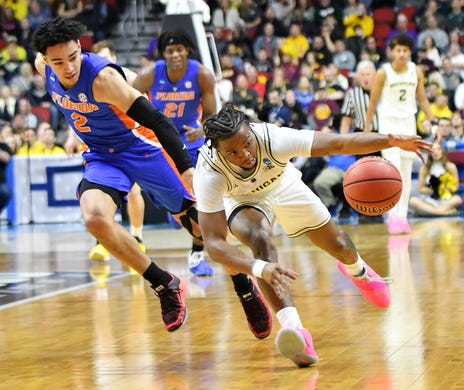 Michigan guard Zavier Simpson (3) gets the ball after stealing it from Florida guard Andrew Nembhard (2) in the first half. Robin Buckson, Detroit News
Fullscreen 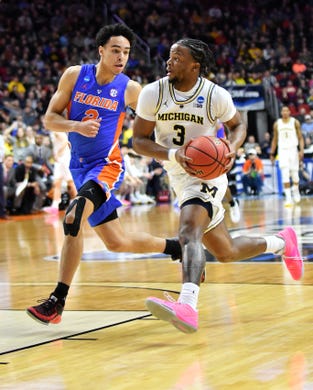 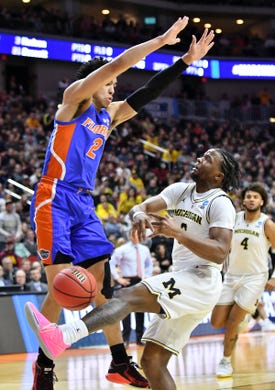 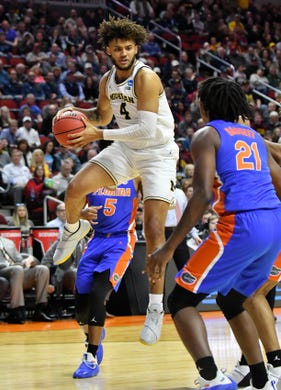 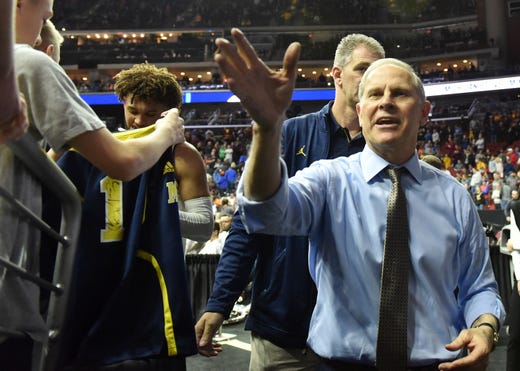 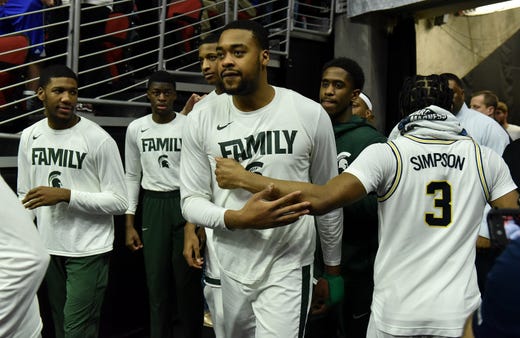 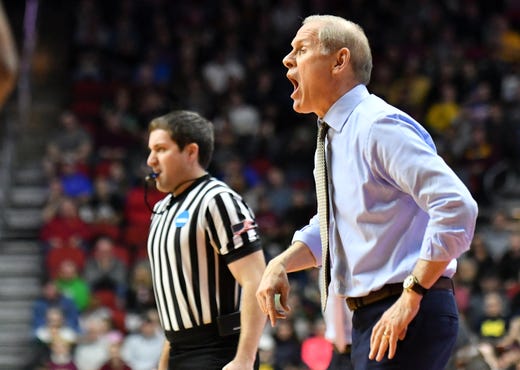 Michigan head coach John Beilein instructs from the sidelines in the second half as plays Florida in Round 2 of the NCAA Tournament at Wells Fargo Arena in Des Moines, Iowa on March. 23, 2019. Michigan wins, 64-49. Robin Buckson, Detroit News
Fullscreen 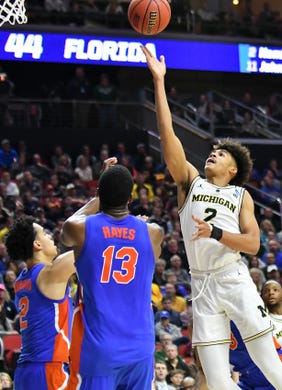 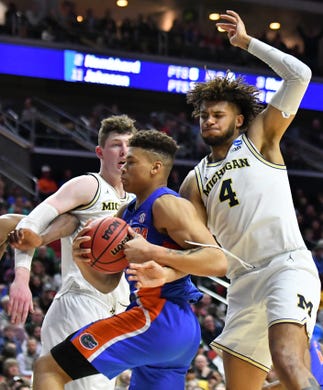 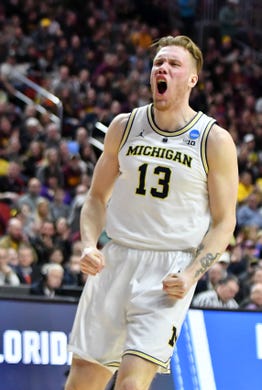 Michigan forward Ignas Brazdeikis (13) reacts after a dunk in the first half. Michigan vs Florida in Round 2 of the NCAA Tournament at Wells Fargo Arena in Des Moines, Iowa on March. 23, 2019. (Robin Buckson / Detroit News) Robin Buckson, Detroit News
Fullscreen 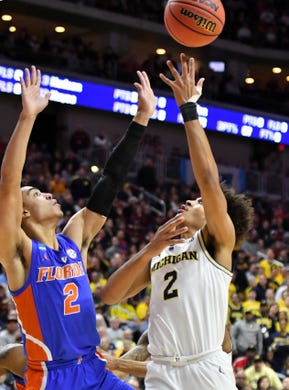 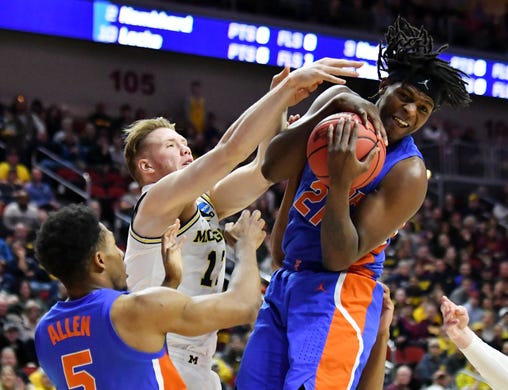 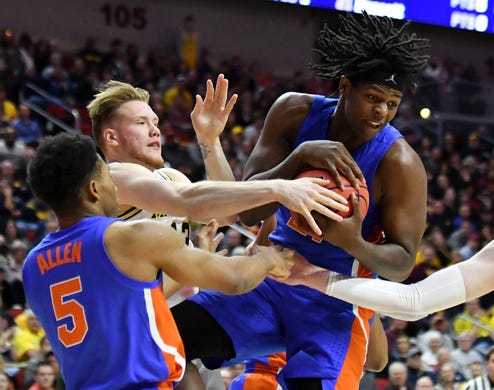 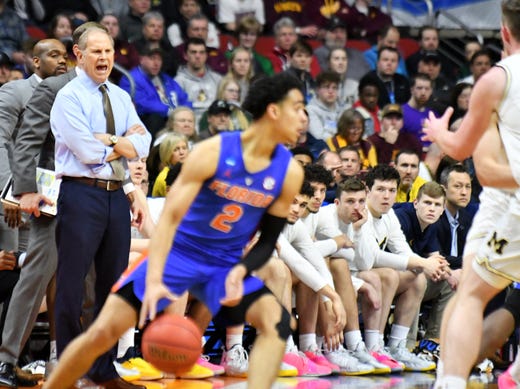 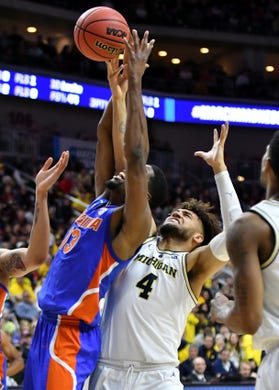 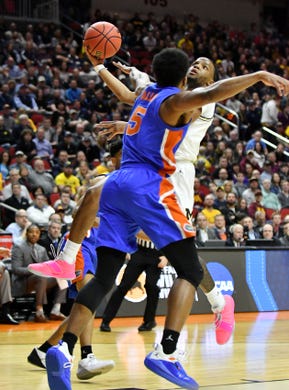 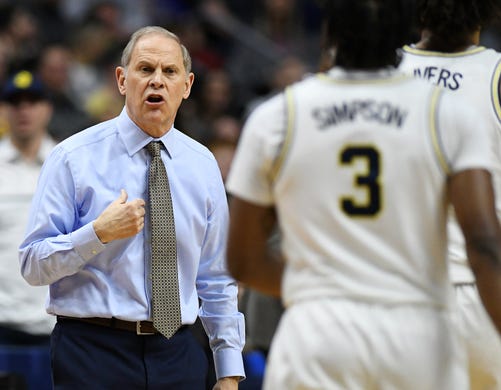 Michigan head coach John Beilein starts talking with his players at a time out in the first half. Robin Buckson, Detroit News
Fullscreen 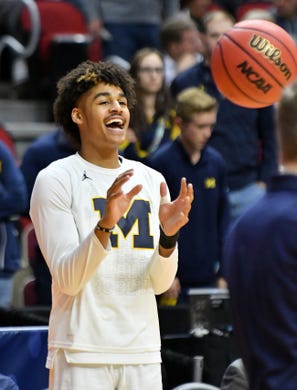 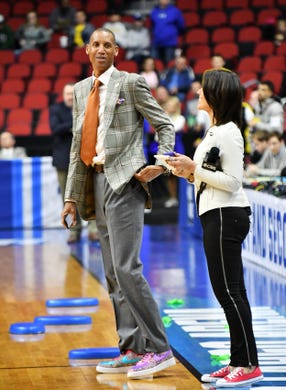 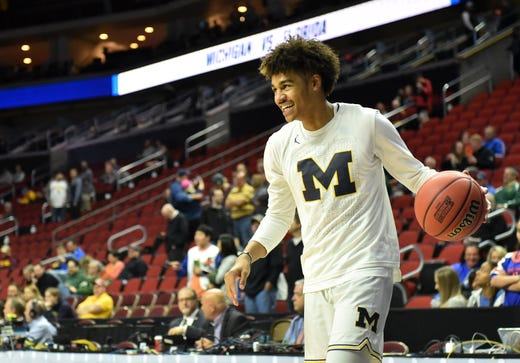 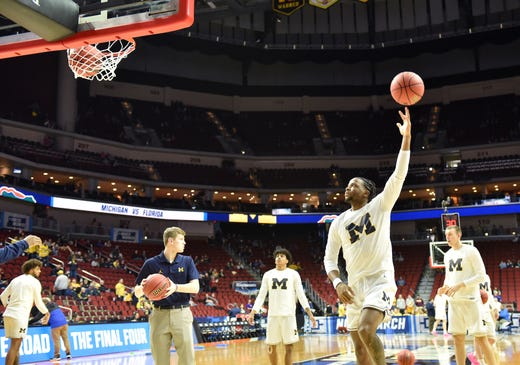 Yet, Michigan's defense never relented and seemingly squeezed tighter and tighter on Florida to never put the lead in danger. After Florida made six 3-pointers in the first half to hang close, the Gators shot 3-for-14 in the second half.

"We wanted to shut off their water," Matthews said. "They were getting open looks and our coaching staff did a great job of recognizing that and we just followed the game plan."

The lead got back to double digits when Livers converted a three-point play to make it 51-41 with 7:34 remaining.

From there, Wolverines put it away with a 9-0 run that was capped by a thunderous fast-break dunk by Livers and a 3-pointer by Poole to push it to 60-44 with 2:00 to go.

"Second half it got away from us," Florida coach Mike White said. "We didn't make the best of decisions offensively. I do think we played really hard in the second half. Left it out there on the floor. Just playing from behind for the second 20 minutes, I thought we expended a lot of energy.

"A big factor in playing from behind is that you're playing the top-ranked defensive efficiency team in the country. We saw firsthand how tough, physical, connected that defense is. They are terrific."

Michigan got the upper hand early in a battle between two of the nation's stingiest defenses. Michigan's ball-screen action gave Florida’s man-to-man defense fits as the Wolverines opened the game with three dunks and a layup.

Michigan didn’t hit its first outside shot until roughly five minutes in on four-point play from Poole, who followed with another 3-pointer for a 15-6 lead with 13:59 left in the first half.

Those were just the first of many as the teams combined to hit eight 3-pointers over the opening 10 minutes, with Florida hitting five deep balls to fuel a 17-6 run and stay close. During the spurt, Florida used a combination of defenses to slow down Michigan and take a 23-21 lead at the 6:47 mark.

The Wolverines responded by holding the Gators to two baskets down the stretch en route to a 32-28 advantage at the break and another dominant defensive showing.

"We've done a great job on defense all year long," Brazdeikis said. "I feel like we're starting to glue together even more now. We're getting better and better, and the best is yet to come."