No. 1 Louisville beat No. 8 Michigan, 71-50, in the second round of the women's NCAA Tournament on Sunday. 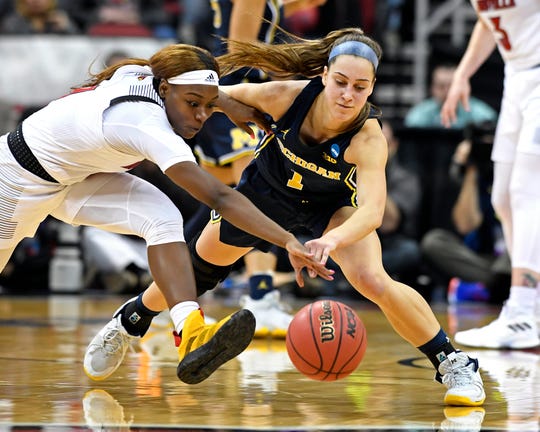 Louisville, Ky. — Asia Durr took the initial lead for top-seeded Louisville by finding teammates for baskets before knocking down shots, making sure to do both quickly.

It typified the Cardinals’ fast approach in many areas that ultimately left No. 8 Michigan a step behind.

Durr scored 24, including 12 in the first quarter to lead Louisville past the Wolverines, 71-50, on Sunday in the second round of the women’s NCAA Tournament.

The Cardinals (31-3) started fast and stayed in gear on the way to earning their third consecutive Sweet 16 berth.

Advancing meant getting a bigger, physical Michigan squad eager to follow up a 30-point first round win with a huge upset. The Cardinals didn’t let it happen, pushing the ball offensively while pressing Michigan defensively. It quickly built a 19-4 lead that steadily increased.

Durr got the Cardinals going with two assists before adding the first of five 3-pointers in the game and a four-point play. 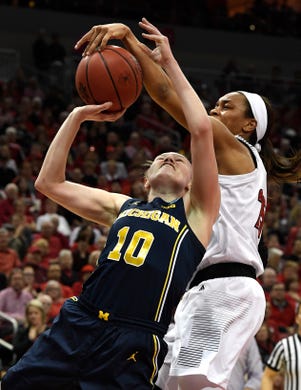 Louisville guard Asia Durr attempts to block the shot of Michigan guard Nicole Munger during the first half of a second-round game in the NCAA Tournament on Sunday, March 24, 2019, in Louisville, Ky. Timothy D. Easley, Associated Press
Fullscreen 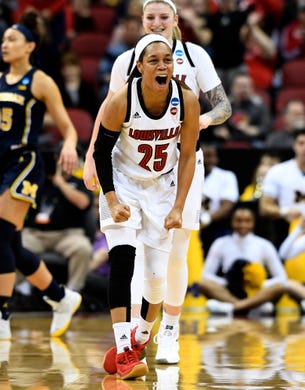 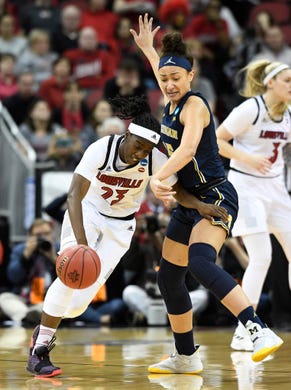 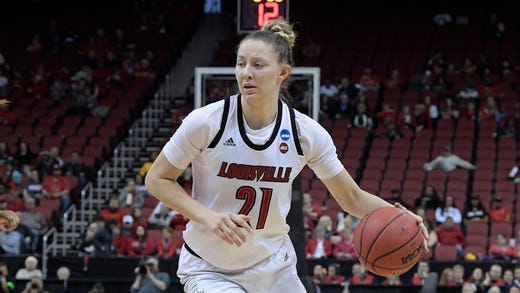 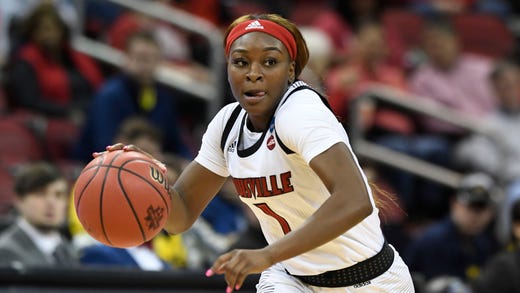 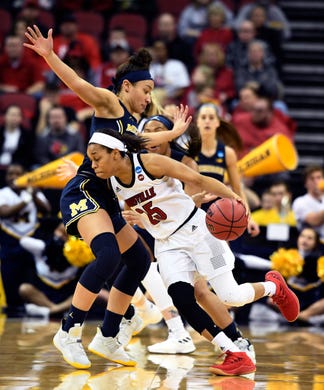 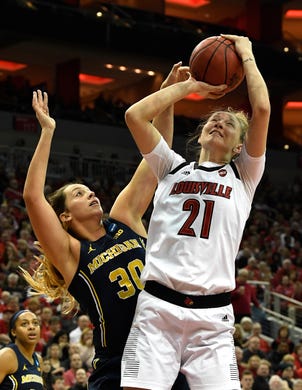 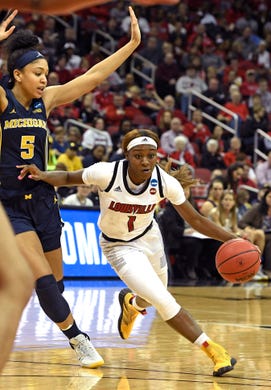 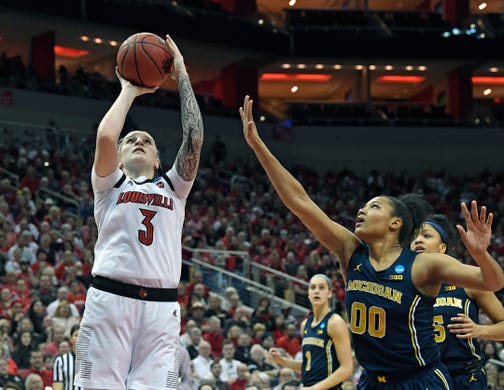 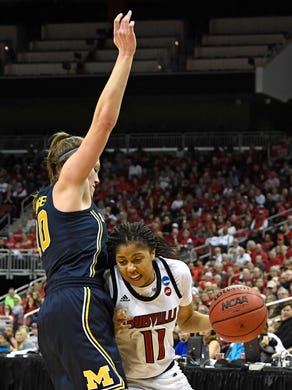 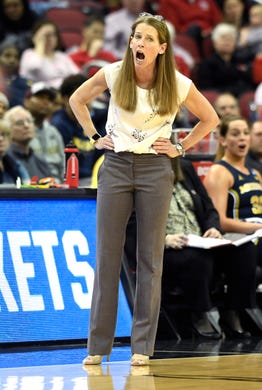 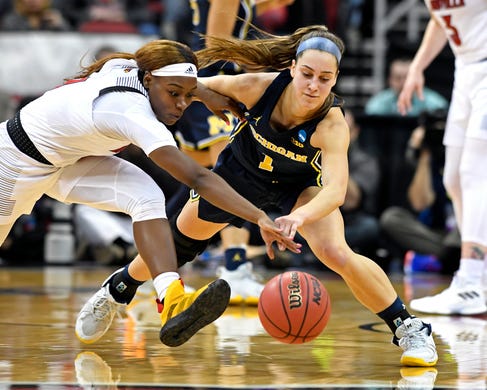 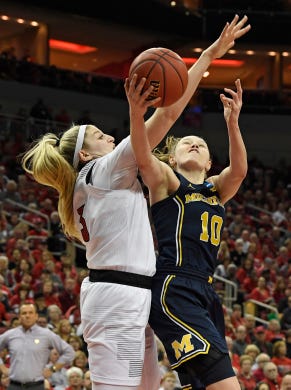 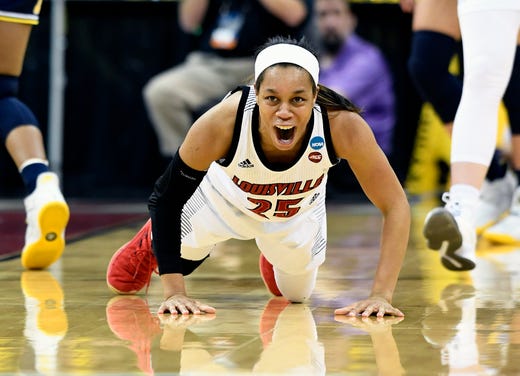 Louisville guard Asia Durr shouts as she gets off the floor after being fouled. Timothy D. Easley, Associated Press
Fullscreen

“I just tried to make the right reads,” said the senior All-American, who finished with five of Louisville’s 16 assists.

“They were throwing like three guards at me, three players at me.

“My teammates were getting open, making great cuts and finished the ball as well.”

Louisville’s defense also came up big, holding the taller Wolverines to just 23-percent shooting in the second half and 43 percent overall. The Cardinals scored 28 off 22 turnovers, forcing 17 by halftime alone.

Jazmine Jones added 15 points while Sam Fuehring and Dana Evans each had 10. Kylee Shook had 10 rebounds and guard Arica Carter seven after missing two games with a left knee injury.

Wise words from @halthome30 as she looks forward to the future of Michigan women’s basketball. #gobluepic.twitter.com/81p9Q9qyAO

Akienreh Johnson had 12 points and Kayla Robbins 10 for Michigan, which fell to 1-4 all-time against Louisville. Michigan (22-12) failed in its fifth attempt to reach the Sweet 16 in its history.

Durr and Carter celebrated their final home victory running side by side around the court to cheers and were soon followed by Fuehring, a fellow senior. That wasn’t the plan in what turned out to be Louisville’s only uncoordinated moment.

“On the first victory lap, they left,” Fuehring joked. “I had to come back out. It was kind of embarrassing, but I enjoyed it.”

Durr explained, “We didn’t know where you went.”

The future is bright. #gobluepic.twitter.com/xuzvVEBOt0

►Michigan: The Wolverines were caught off guard from the jump in allowing consecutive layups. The early turnovers didn’t help, the result of being sped up more than they wanted to be by the Cardinals. They settled down to commit just five after the break but were outscored 17-6 in the third quarter.

“That was their game plan,” Johnson said of Louisville. “They played their normal game, but they definitely brought a lot of intensity the first couple of minutes of the game. But we started to adjust to the pressure.”

►Louisville: The returns of Carter from injury and coach Jeff Walz from suspension made the Cardinals whole, and it showed with effective precision and intensity that negated Michigan’s size and athleticism. Their bench was outscored 28-12, but it didn’t matter because they controlled areas such as rebounding (35-34) and paint scoring (36-30) against a challenging opponent.