After spending the past seven seasons as a member of the Michigan women’s basketball coaching staff, Melanie Moore will get the chance to lead her own. 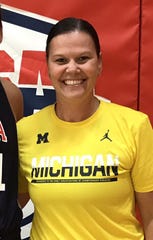 After spending the past seven seasons as a member of the Michigan women’s basketball coaching staff, Melanie Moore will get the chance to lead her own.

"I am truly honored and humbled to be the next leader for Xavier women's basketball," Moore said in a statement. "Xavier is an incredible place that prides itself on academic and athletic excellence. I am excited to get to work and lead the women's basketball program back to excellence both on and off the court.”

Moore joined Michigan’s staff when Kim Barnes Arico took over as head coach in 2012. The duo guided the Wolverines to a 156-85 record, three NCAA Tournament appearances, a WNIT championship and seven consecutive seasons with at least 20 wins.

“Congratulations @moore_mel,” Barnes Arico tweeted. “Thank you for helping take our program to new heights. Xavier has hired a rockstar. Good luck. I will miss you.”

Moore will become the eighth coach in Xavier's program history and will take over for Brian Neal, who stepped down after six seasons. The Musketeers are coming off an 11-19 season and have made 10 NCAA Tournament appearances, most recently in 2011.

"We couldn't be happier to announce Melanie as our next women's basketball coach," Xavier athletic director Greg Christopher said in a statement. "After talking with Melanie over the last week and hearing her vision to move our program forward, it became clear that she would be a perfect fit at Xavier.

"Melanie brings a great blend of experience to Xavier. She was an accomplished collegiate player who played professionally. And in 17 years of coaching, Melanie's been a part of rebuilding programs and high-level success."

Grateful to @KBA_GoBlue for the last seven years at Michigan & for being an incredible mentor & friend to me! Thank you for showing me how to lead! We will always be family!

Thank you to the staff, players, and Michigan community for having an A-MAIZE-ING impact on my life. Wishing you all continued success! I’m excited for my next journey and look forward to bringing a rich winning tradition back to Xavier! Let’s go X!!!!