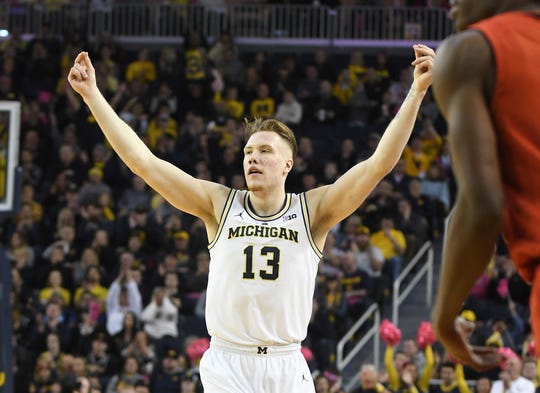 Michigan's Ignas Brazdeikis is one of three Wolverines to declare for the NBA draft on Tuesday. (Photo: Daniel Mears, Detroit News)

Michigan’s top three scorers could all be moving on.

This marks the third straight offseason Michigan will have multiple starters testing the draft waters. But this time, it's a bit different.

Under new NCAA rules, underclassmen are allowed to hire certified agents to guide them through the pre-draft process. They're also allowed to return to school as long as they end the relationship with the agent and withdraw their name from draft consideration by May 29.

"Charles, Jordan and Iggy have all decided to take the next steps in pursuing their dreams of playing in the NBA," coach John Beilein said in a statement. "The new process is a unique experience and one that my staff and I will assist in every way we can. We want each of them to utilize this opportunity to get more feedback, so they can make the best decision possible for themselves and their families. All three are remarkable young men with amazing futures in front on them.”

Matthews (6-foot-6, 205 pounds) declared for the draft without an agent last year and went through pre-draft workouts with the Boston Celtics, Denver Nuggets and New York Knicks before he suffered a wrist injury that caused him to cancel the rest of his workouts.

Matthews returned to Michigan with the hopes of evolving his game, developing his 3-point shot and improving his draft stock. He finished the season as the team’s third-leading scorer (12.2 points) and rebounder (five) in addition to being one of the top wing defenders on one of the nation’s best defensive units.

Following Michigan's Sweet 16 loss to Texas Tech, Beilein made it known several times he expects Matthews to forgo his final season of eligibility and pursue a professional career.

"Many people have known about my desire to play professionally, and my family and I are blessed to begin that process again," Matthews said in a statement. "After gaining so much valuable information last year, I am looking forward to taking that next step.

“Everyone at Michigan holds a special place in my heart, especially Coach Beilein and the staff. They have helped make this opportunity for me and my family, and I will always be thankful. The journey has only just begun."

Brazdeikis (6-7, 215) was named the Big Ten freshman of the year and earned All-Big Ten second team honors after leading Michigan in scoring at 14.8 points per game. He also averaged 5.4 rebounds and shot 39.2 percent from 3-point range, marks that ranked second on the team.

Following a string of impressive nonconference performances early in the season, Brazdeikis' name appeared in a couple mock drafts as a late first-round selection but it didn't stick once Big Ten play picked up.

Brazdeikis, who also spoke to ESPN about his decision, would be Beilein’s first one-and-done player at Michigan if he stays in the draft.

"As long as I can remember, I've wanted to be an NBA player — not just an NBA player, but an NBA All-Star," Brazdeikis told ESPN. "My intent is to be drafted this year as high as I can be and start my journey.”

Poole (6-5, 195), last season’s NCAA Tournament hero with his buzzer-beater against Houston, will arguably have the most interesting decision of the three. As one of the team's top perimeter threats, Poole doubled his offensive production from his freshman year and ranked second on the team in scoring at 12.8 points per game.

He shot 36.9 percent from 3-point range and made a team-high 75 3-pointers in his first year as a full-time starter.

"The last two years here at Michigan have been amazing and filled with so many memories," Poole said in a statement. "I've not only become a better player but a better individual. Being able to play in the NBA has always been my dream since I was young. I am confident that with my faith in God and hard work that I, and my family, are prepared to look at all options and make the right decision for the next step of my playing career."

The three are all ranked in ESPN’s top 100 prospects for the NBA draft, which will take place on June 20, with Brazdeikis checking in at No. 48, Poole at No. 68 and Matthews at No. 69.

College players will have until 10 days after the combine, which will take place May 14-19 in Chicago, to remove their names from the draft and terminate ties with the agent if they want to retain their eligibility.