Michigan football checks in at No. 9 in 'post-spring' rankings

"Post-spring" rankings from the Sporting News and CBS Sports slot Michigan in at No. 9. Michigan State is unranked.

Michigan football checks in at No. 9 in 'post-spring' rankings 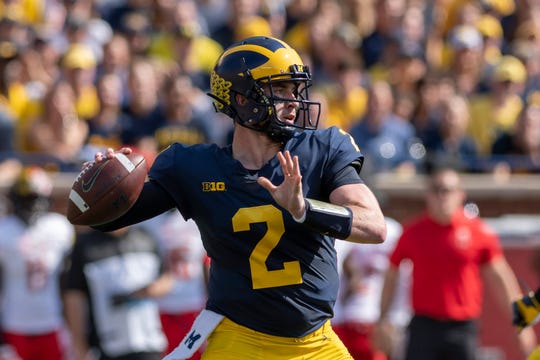 Michigan quarterback Shea Patterson will have a number of dangerous targets to choose from next season. (Photo: David Guralnick, Detroit News)

Jim Harbaugh has reached 10 victories in three of his four seasons as Michigan's head football coach, though it's his losses that garner the most attention.

The Wolverines appear to be poised to at least reach double figures again next season, with at least two "post-spring" top 25 rankings — from CBS Sports and the Sporting News — recently slotting them in at No. 9.

And, though Michigan is an early favorite in every game next season, it doesn't figure to be easy.

"The Wolverines have the eighth-best record among Power 5 teams since Jim Harbaugh arrived at Ann Arbor in 2015, but the only record that gets air time is 0-4," Bill Bender, national college football writer for the Sporting News, explains. "Harbaugh still hasn't beat Ohio State, and the schedule features the same potholes with an early matchup against Army and road trips to Wisconsin and Penn State."

Michigan plays host to Army, which is ranked No. 17 by the Sporting News and No. 19 by CBS Sports, in its second game of the season before heading to Wisconsin two weeks later, following an open date.

"The hire of offensive coordinator Josh Gattis and the promise of #SpeedInSpace on offense will build some enthusiasm around quarterback Shea Patterson<" Bender writes, "and a talented group of receivers that includes Donovan Peoples-Jones, Nico Collins and Tarik Black. The Wolverines still need to find a running back, and defensive coordinator Don Brown has several pieces to replace on defense."