Maintaining the series with Notre Dame is something that’s on the radar for Michigan athletic director Warde Manuel and Notre Dame AD Jack Swarbrick.

Michigan athletic director Warde Manuel admits he was surprised John Beilein decided to leave the Wolverines and head to the NBA. The Detroit News

Rosemont, Ill. — While most Michigan fans claim Ohio State as the Wolverines’ biggest rival, there’s no doubt there is a certain level of importance placed on the series with Notre Dame. 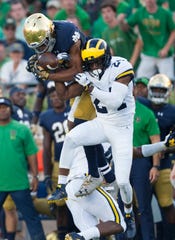 It’s one that ended in 2014 before the teams agreed to a home-and-home that will be completed this fall when Notre Dame visits Michigan Stadium on Oct. 26. Beyond that, however, there are no guarantees as to when the two storied programs might meet again.

However, it’s something that’s on the radar for Michigan athletic director Warde Manuel and his counterpart at Notre Dame, Jack Swarbrick.

“We haven’t talked about anything recently,” Manuel said this week at the Big Ten’s spring meetings. “We have talked in the past about wanting to continue, but in the last few months, no, we haven’t talked about it. I’ve been working on some other scheduling things and so has he and so we both have the interest to do it in the future, just not sure when.”

Michigan leads the all-time series against Notre Dame 24-18-1, but the Fighting Irish have controlled the matchup in recent meetings, winning three of the last four, including last season’s 24-17 victory in South Bend.

The first meeting between the teams was in 1887 but they started to play regularly in 1978. The series continued every season from 2002-14 before Notre Dame opted out of a deal that was supposed to last through 2031.

Manuel joined the football team earlier this month when it traveled to South Africa. It was the third straight year Jim Harbaugh’s team went overseas after visiting France and Italy the previous two years.

For Manuel, the trip was invaluable.

“So you can talk to them, but the majority, the super majority who talked to me said this was the best — of those who went on all three, said by far this was their favorite of the three.”

Michigan alumni Bobby Kotick and Don Graham funded last year’s trip, and Kotick paid for the visit to Italy. Harbaugh has said Kotick will pay for the tours as long as the coach wants to do them.

Harbaugh has talked about Greece, Spain and Cuba as possible destinations for the annual opportunities for his players to learn and bond, but Manuel wasn’t giving any hints.

“We haven’t finalized anything on the next one,” he said. “Stay tuned.”

Hanging on to Harbaugh

While Manuel is focused on replacing basketball coach John Beilein, he’s counting on not worrying about finding a new football coach anytime soon. Harbaugh is entering the fifth year of his seven-year deal, and Manuel said last year he hoped Harbaugh would finish his career with the Wolverines.

“I’m not going to announce any conversations I’ve had with Jim about his contract or whatever,” Manuel said. “I stand by my decision and my statement that I want him to retire here.”