Aubrey Dawkins told The Detroit News he’d love to someday be reunited with John Beilein, who left Michigan to coach the Cleveland Cavaliers. 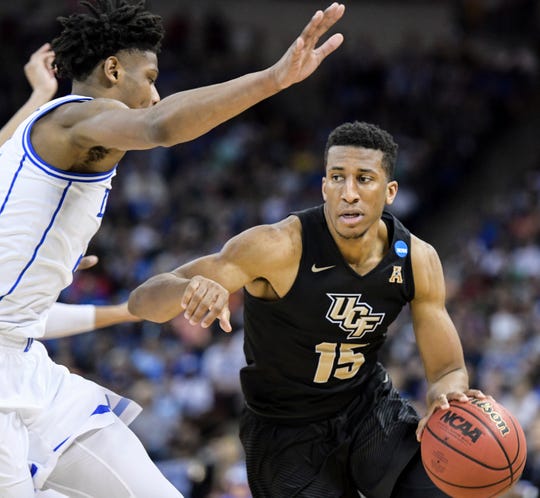 Chicago — It’s not just the three Michigan players from last season trying to join their former coach John Beilein in the NBA with a strong performance in Chicago this week.

Dawkins told The Detroit News on Thursday that he’d love to someday be reunited with his former coach, who left college on Monday to coach the Cleveland Cavaliers.

“He knows me and knows my game, obviously because he recruited me, so it’d be really, really cool honestly,” Dawkins said on a phone call from Orlando. “He knows the game well, he knows how to get guys shots. He’s really big on spacing, which are all things that the NBA is huge on, so I think it’ll be fine for him.

“I was surprised for him to be leaving his career at Michigan, but I’m happy for him, for sure. It’s awesome. It’s a good opportunity for him in a different landscape.”

For now, Cleveland has just two first-round picks, so it’s unlikely Beilein selects Dawkins in the draft, where he's a second-rounder at best. Of course, a chance for any NBA team is truly what Dawkins desires.

“I’m just enjoying the process as everyone says,” Dawkins said. “It’s been fun.”

With Hawkins’ work in Chicago done, a trio of Wolverines from last season — Jordan Poole, Ignas Brazdeikis and Charles Matthews — are also hoping to catch the eyes of NBA personnel at the NBA combine Thursday and Friday.

The 6-foot-6 Dawkins played two seasons for Beilein at Michigan before transferring to Central Florida to play for his father, former Pistons guard Johnny Dawkins.

Aubrey Dawkins boosted his pro prospects in March by scoring 32 points and nearly derailing Duke’s NCAA Tournament hopes on the first weekend, though his potential game-winning tip kissed the rim before sliding off.

While that helped put him on the NBA radar, analysts said teams want to see more.

“For Aubrey it’s about teams figuring out whether or not that one tournament performance was just kind of an outlier,” ESPN’s Mike Schmitz said. “He had a little bit of an up-and-down season this year, but I think teams like the fact that he can shoot the ball and he’s explosive.”

Unlike 7-foot-6 UCF teammate Tacko Fall, Dawkins was not among 11 players of the 40 who were asked to stay for the regular combine.

Dawkins struggled shooting in the scrimmages, going 4 for 18 from the field and 1 of 8 from 3-point range in two losses. He averaged 4.5 points, 2.0 rebounds and 1.5 assists over 22 minutes per game.

“It was OK, could’ve gone better,” Dawkins said. “I was not feeling my best going into it, but I think it went OK. Just got to grind through the process.”

Joining D.J. Wilson, Kam Chatman and Muhammad Ali Abdur-Rahkman among Beilein’s 2014 recruiting class, Dawkins made an immediate impact in Ann Arbor. As a freshman, he shot 43.8 percent on 3-pointers, and knocked down eight from deep in a career-high 31-point game against Rutgers in the final game of his freshman regular season.

He played in 66 Michigan games in two seasons, starting 22.

But his scoring dipped from seven points per game to 6.5 as a sophomore. Dawkins’ minutes fell by an average of 5 per contest as transfer Duncan Robinson added to a crowded group of wings that already included Caris LeVert and Zak Irvin.

Dawkins then joined his father in Orlando with the Knights, where Dawkins caught on nine days after getting fired by Stanford. After sitting out a transfer season and then one more with a shoulder injury, Aubrey Dawkins averaged 15.6 points and 5.0 rebounds and shot 3-pointers at a 40.3-percent clip, nailing over 40 percent for each of his three college seasons.

His age — Dawkins turned 24 earlier this month and also played a post-graduate prep season in New Hampshire before joining the Wolverines — is working against him during the draft process, evaluated against some players more than five years younger than him.

“I think he had the benefit of playing the majority of this year at 23 years old, which is part of the reason why he was able to be so productive,” Schmitz said. “But I think playing with consistent toughness and showing he can make the right reads and do a little more with the ball are things that teams are looking for with him.”

Dawkins could squeeze into the second round, or find his NBA opportunity as an undrafted free agent.
Mock drafts this week by ESPN.com, SI.com, The Athletic, Bleacher Report and The Ringer have Dawkins going unselected in the 60 picks on June 20. However, NBADraft.net on Thursday had Dawkins going No. 55 to the New York Knicks in the second round.

Dawkins is rated as the 97th player on the big board for Sam Vecenie of The Athletic. The three Wolverines are within four spots of each other: Poole at No. 53, Brazdeikis at 55 and Matthews at 56.

Dawkins worked out for Atlanta and Boston last week and had another canceled in Houston because of weather. He was back in Florida on Thursday where he’s been training in Orlando and Miami as the draft approaches. In Chicago, he said met with representatives from other teams he hopes to schedule workouts with later.

"They’re kind of just firing questions at you, wanting to get to know you as a person, just kind of see how you are,” Dawkins said, adding he’s staying focused on the day-to-day grind. “I know it’s cool and obviously I’m very grateful for the opportunity to have a chance to play in the NBA, but I don’t want to get too caught up in it as I go through the process.

“It’s easy to get distracted out here.”