Jalen Rose isn’t the only Fab Five member who is endorsing Juwan Howard to be the next head coach at Michigan.

Ann Arbor — Jalen Rose isn’t the only Fab Five member who is endorsing Juwan Howard to be the next head coach at Michigan.

Jimmy King followed suit and voiced his support for Howard on Saturday, saying he believes his former college teammate is “the best candidate” for the job.

“I know I'm biased, obviously, but if you look at just his pedigree alone it speaks for itself,” King said before the ChadTough Foundation's third annual “Champions for Change” gala fundraiser, which raises research funds for pediatric brain cancer.

“Aside from him being a former alumni, a Fab Five member and my former teammate and friend, if you set that aside and you look at the pedigree that he has being a high school All-American, being one of the top three players in the country, being part of the Fab Five and leading Michigan to two Final Fours, winning championships at the NBA level, coaching at a high degree, his resume speaks for itself.”

Howard was a second-team All-American and No. 5 overall pick in 1994 before embarking on a 19-year NBA career. Since his retirement in 2013, he has been an assistant coach with the Heat learning under the tutelage of Erik Spoelstra and Pat Riley and helping develop Miami's big men.

This spring alone, Howard, 46, has reportedly interviewed for openings with the NBA’s Cleveland Cavaliers, Los Angeles Lakers and Minnesota Timberwolves.

And he appears to also be on Michigan's radar. Howard told ESPN on Friday he has spoken with representatives of Turnkey Sports, the firm that's assisting Michigan and athletic director Warde Manuel in the national search following the departure of John Beilein, the program's all-time winningest coach.

According to a report from The Michigan Insider, Manuel is expected to meet with Howard on Tuesday to discuss the vacancy.

While the knock on Howard is that he has never been a head coach — aside from his short stint coaching the Heat’s 2016 Summer League teams — King doesn’t think that should be a deterrent.

“Anyone can point saying, 'Well, he's never had a head coaching position,’" King said, "but there have been a lot of great coaches that have never been an assistant coach that skipped straight to a head coach and had great success i.e. John Beilein.

"He's been a head coach all his life. He was never an assistant and look at where he's at. I believe Juwan Howard, all things considered, is a great option."

Another unknown with Howard is his ability to recruit since all his coaching experience is at the pro level. But King, much like Rose, thinks Howard wouldn’t have any problems in that area.

On Friday, Rose said Howard was the first Fab Five member to sign at Michigan in 1991 and was instrumental in bringing the star-studded recruiting class, which also included Chris Webber and Ray Jackson, to Ann Arbor. 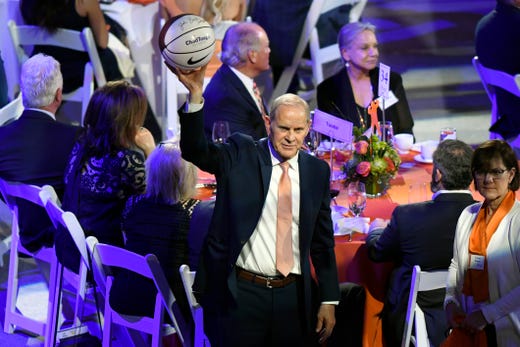 Former University of Michigan men's basketball head coach John Beilein holds up an autographed basketball, which he gave to anyone who donated $10000 immediately to The ChadTough Foundation. Jose Juarez, Special to Detroit News
Fullscreen 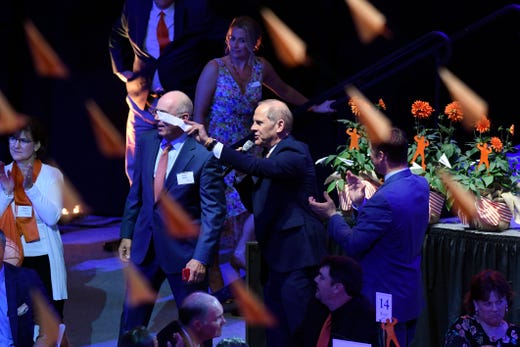 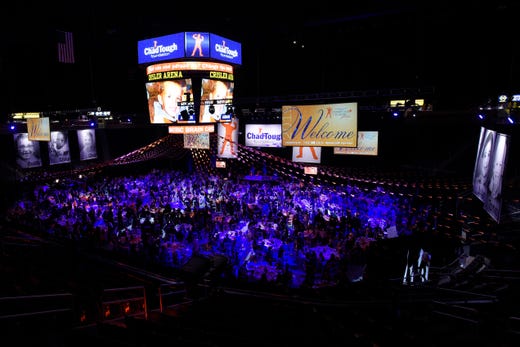 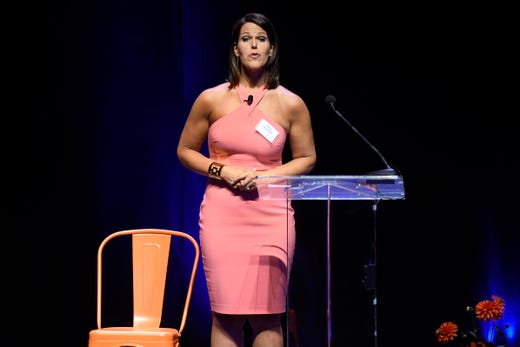 CBS This Morning Saturday co-host Dana Jacobson, who is also a University of Michigan graduate, gives opening remarks at the start of the 3rd Annual Champions for Change Gala. Jose Juarez, Special to Detroit News
Fullscreen 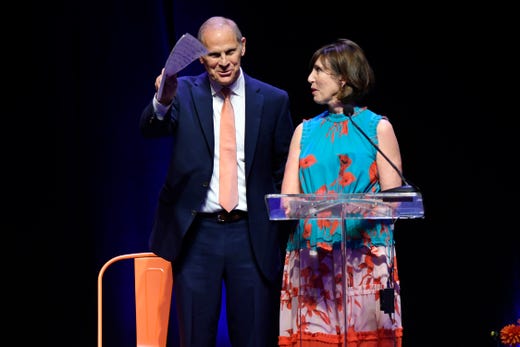 Former University of Michigan men's basketball head coach John Beilein acknowledges the crowd as he stands next to his wife, Kathleen, at the start of the 3rd Annual Champions for Change Gala. Jose Juarez, Special to Detroit News
Fullscreen 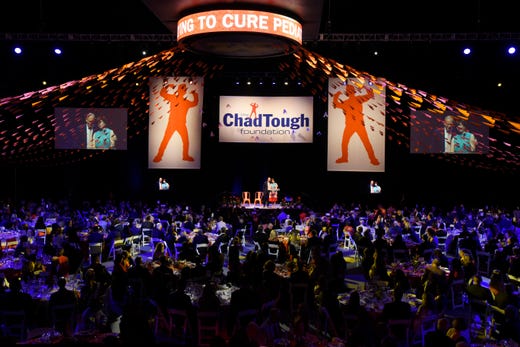 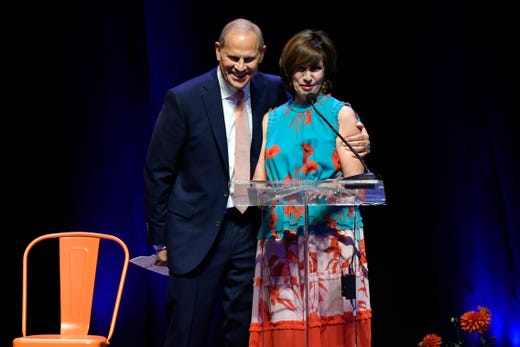 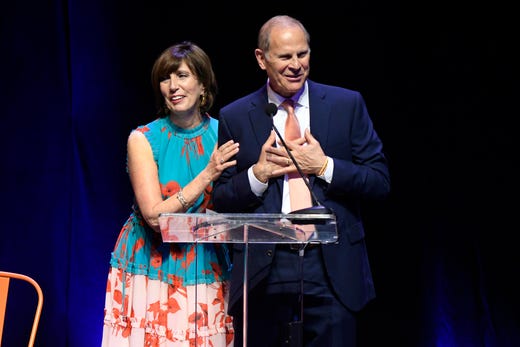 Tammi Carr, who is one of the board of directors for the ChadTough Foundation, shows off her ChadTough wristband. Jose Juarez, Special to Detroit News
Fullscreen 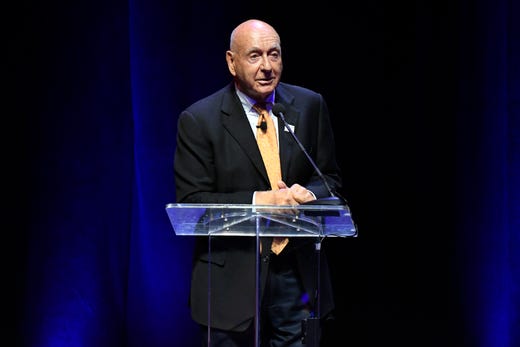 Tv personality Dick Vitale, who was the recipient of the ChadTough Spirit Award, addresses the crowd. Jose Juarez, Special to Detroit News
Fullscreen

Tammi Carr, who is one of the board of directors for the ChadTough Foundation, points to an auction winner, to whom former Michigan quarterback Jake Rudock will throw an autographed football. Jose Juarez, Special to Detroit News
Fullscreen

Tammi Carr, who is one of the board of directors for the ChadTough Foundation, watches as former Michigan quarterback Jake Rudock throws an autographed football to an auction winner. Jose Juarez, Special to Detroit News
Fullscreen

CBS "This Morning Saturday" co-host Dana Jacobson, right, who is also a University of Michigan graduate, talks with a guest during the 3rd Annual Champions for Change Gala, benefiting The ChadTough Foundation, Saturday, May 18, 2019 at the Crisler Center in Ann Arbor, Mich. Jose Juarez, Special to Detroit News
Fullscreen 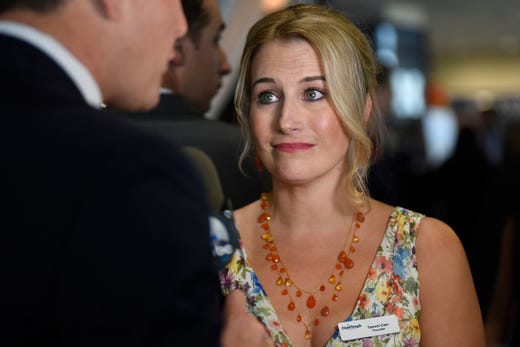 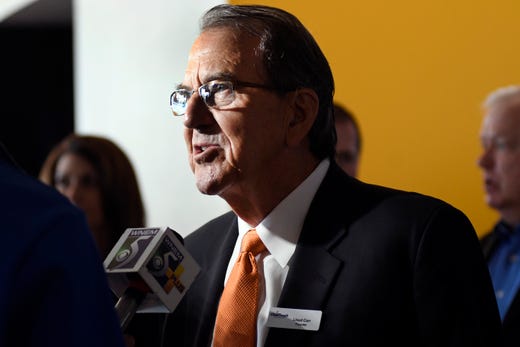 Lloyd Carr, who is one of the board of directors for the ChadTough Foundation, is interviewed. Jose Juarez, Special to Detroit News
Fullscreen 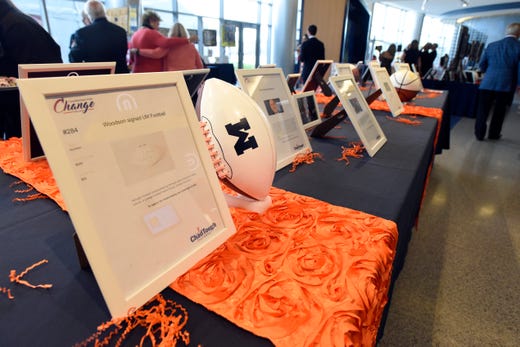 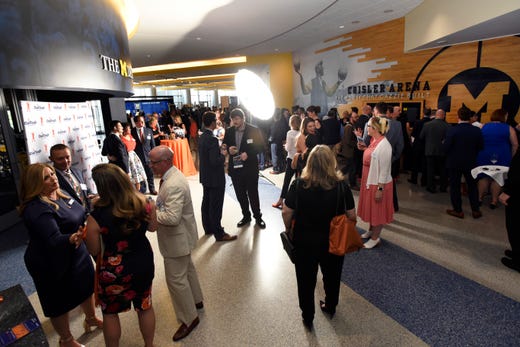 Guests socialiize with one another before the start of the program for the 3rd Annual Champions for Change Gala, benefitting The ChadTough Foundation, Saturday, May 18, 2019 at the Crisler Center in Ann Arbor. Jose Juarez, Special to Detroit News
Fullscreen

One of several tables with auction items, which includes an autographed jersey of New England Patriots quarterback Tom Brady, is displayed during the 3rd Annual Champions for Change Gala. Jose Juarez, Special to Detroit News
Fullscreen 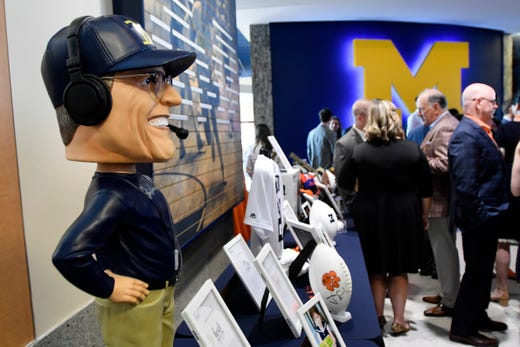 “He's a great communicator,” King said. “He recruited me, Ray, Jalen and Chris and look what he's done. This would be 2.0, for a lack of a better term, for him to be able to recruit another prominent team and build a program."

Of course, not much has to be built with the foundation Beilein has laid during his 12 years at the helm, highlighted by nine 20-win seasons, nine NCAA Tournament appearances and two trips to the national title game.

Another thing that doesn't need to be built? Howard's ties to the university.

King said that's one factor that favors Howard compared to an outsider, adding his familiarity with the university and relationships within the program would make for “an easy transition."

All things considered, King said he’s excited at the possibility Howard could fill the head coaching vacancy and compared it to being recruited out of high school again.

And if he was a recruit looking at possible colleges, King said Howard’s resume would be “highly attractive.”

“Set everything aside and look at his pedigree,” King said. “He played (19) years in the NBA. He has experience. He has relationships. There are things that you can't buy from what Juwan Howard would bring to this program.

“High school, college and pro, he's the best guy. There are other guys out there but when it comes to relationships and the past here at the University of Michigan, Juwan Howard fits the bill.”

Even though Beilein accepted a job to be the next head coach of the Cavaliers earlier this week, there was no way he was going to break his commitment to co-chair Saturday's gala along with this wife, Kathleen.

The ChadTough Foundation is inspired by Chad Carr, who was 5 years old when he died on Nov. 23, 2015 of Diffuse Intrinsic Pontine Glioma (DIPG). Tammi and Jason Carr have worked to fund efforts to find a cure since.

“This is an incredible opportunity for us to grow more awareness of DIPG,” Beilein said. “We were very good friends with the Carr family from the beginning. Lloyd was one of the first members of the staff I met. I said, 'I want to meet Lloyd Carr.' They took me right over to him and he couldn't have been more genuine.

“Tammi's children are my grandchildren's age, so we've known them before the disease hit Chad. It hits you right in the heart. Whatever we can do to help, it's going to be great."

Beilein, who declined to comment on any basketball matters, said Saturday wasn't a final goodbye. Rather, he plans to remain involved with Michigan in the future.