For Braiden McGregor, four-star DE, 'It was always Michigan'

Braiden McGregor of Port Huron Northern, one of the nation’s top defensive end prospects in the 2020 class, will play college football at Michigan, he announced Friday night.

For Braiden McGregor, four-star DE, 'It was always Michigan'

Braiden McGregor announces he will attend Michigan The Detroit News

Port Huron — In reality, Braiden McGregor said Friday, he was probably going to Michigan all along.

The Port Huron Northern High School rising senior told coach Jim Harbaugh and the Wolverines coaching staff on May 11 that he was staying home. 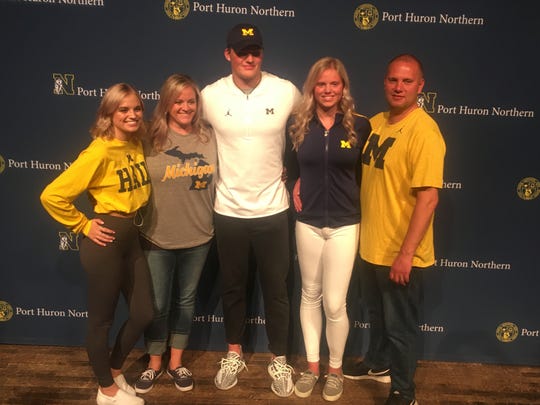 The defensive end recruit told the rest of the college football world at a ceremony Friday at his high school.

“It’s been a hard secret to keep, but I think we did a good job,” McGregor said. “It was always Michigan. Growing up in Michigan, being a Michigan kid, that’s who I rooted for when I was younger. Then just the people there. Great academics, great football.”

McGregor (6-5, 250 pounds) is rated a four-star prospect and the No. 5 strong-side defensive end in the nation by 247Sports. The Detroit News has him as the second-best player in the Class of 2020 statewide.

However, McGregor said the Michigan coaches have indicated they expect him to start off on the weak side.

Recruiting analyst Allen Trieu of 247Sports said he thinks McGregor will have a chance to play as a true freshman.

“I think his upside is extremely high,” Trieu said. “Michigan is putting a lot of premium on being able to rush the quarterback. They like speed, they like aggressiveness and there’s no prospect in the state of Michigan that does more of those things than Braiden.”

After a video presentation filmed at the Northern weight room and at Port Huron’s Memorial Stadium, McGregor told the hundreds of well-wishers in attendance his decision.

"For myself, it's been Michigan since the first visit I went there, I was comparing everything to Michigan," McGregor said. "Being in Michigan and being close to home, that's something big for me."

After thanking the crowd, McGregor then faked them, touching the Clemson hat with his right hand and going to the maize and blue with the right, making his intentions known.

Along with his immediate family — sisters Steeleigh and Jersey, and parents Steve and Tara — Braiden then took off his sweatshirt, revealing gear with the block ‘M.’

In reality, the McGregors almost two weeks ago delivered Harbaugh the good news in person, faking a group picture with the coaching staff before revealing the news.

“They were genuinely surprised,” said Steve, a lifelong Michigan fan. “Braiden just laid it on us that Michigan is where he wanted to be and he’s felt that way for awhile, but he just wanted to 100 percent make sure.”

McGregor becomes the ninth commitment in the Wolverines’ 2020 class and the first defensive end. He is the third player from Michigan in the class, joining Belleville cornerback Andre Seldon and West Bloomfield linebacker Cornell Wheeler.

On the defensive line, Michigan lost Chase Winovich and Rashan Gary to the NFL Draft, but return ends such as Aidan Hutchinson and Kwity Paye.

“They play so fast and they like to keep their bodies fresh, so Michigan rotates a lot of guys in the front seven,” Trieu said. “I think Braiden will have a chance. Sometimes it’s an issue of not being big enough to compete at that level as a true freshman. I think he’s going to come in physically ready to compete as well.”

McGregor was offered by Michigan in April 2018, two weeks after being offered by coach Brian Kelly and the Irish.

He said he will call the coaches of his other finalists this weekend to thank them for recruiting him.

McGregor said he will enroll at Michigan in January and is already getting to work recruiting other prospects.

“Most importantly, I’m just glad I’ve got him for one more year,” Roelens said before the announcement.