Michigan commit Zeb Jackson is wrapping up his prep career at a national powerhouse. 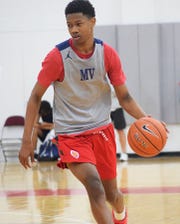 Michigan commit Zeb Jackson is wrapping up his prep career at a national powerhouse.

Jackson announced on Twitter Thursday night he is transferring from Maumee (Ohio) Valley and heading to Montverde Academy in Florida.

“I want to thank Maumee Valley for all the fun years and memories,” Jackson tweeted. “Now, I’m excited to say I’ll be attending Montverde Academy for my senior year of high school!!”

Jackson, who was named Ohio’s Division IV player of the year, averaged 24.8 points, 7.9 rebounds, 3.4 assists and 3.1 steals per game at Maumee Valley this past season. The 6-foot-2, 160-pound guard is rated the No. 2 prospect in Ohio and No. 59 recruit nationally in the 2020 class, according to the 247Sports composite rankings.

Montverde Academy has won four national titles since the National High School Invitational launched in 2009, more than any other program. That stretch includes three straight championships from 2013-15 before Montverde Academy won it again in 2018.

Jackson verbally committed to the Wolverines in October and is Michigan’s lone commit for 2020. His pledge hasn’t wavered since John Beilein left for the NBA and was replaced by former Fab Five member Juwan Howard.

I want to thank Maumee Valley for all the fun years and memories. Now, I’m excited to say I’ll be attending Montverde Academy for my senior year of high school!!💜💛🦅 pic.twitter.com/or8aYJinfw