McElwain sees in-state talent as key to turning Chippewas around

Jim McElwain wasn’t actively looking for another head coaching job, but he’s pleased to be at the helm of Central Michigan, trying to guide a program that went 1-11 and winless in the Mid-American Conference last season.

McElwain sees in-state talent as key to turning Chippewas around 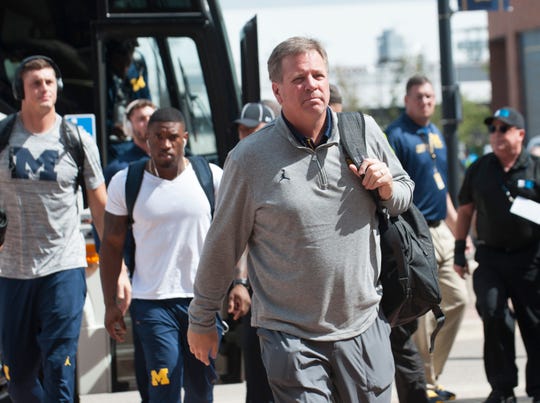 Jim McElwain, who spent last season at Michigan coaching receivers, had been head coach at Florida from 2015-17 and was head coach at Colorado State from 2012-14. (Photo: John T. Greilick, Detroit News)

Allendale — Jim McElwain wasn’t actively looking for another head coaching job, but he’s pleased to be at the helm of Central Michigan, trying to guide a program that went 1-11 and winless in the Mid-American Conference last season.

McElwain, who spent last season at Michigan coaching receivers, had been head coach at Florida from 2015-17 and was head coach at Colorado State from 2012-14. He was one of the speakers Sunday at the Best of the Midwest football camp at Grand Valley State that attracted about 900 high school prospects and a number of coaches, including Michigan coach Jim Harbaugh and most of his staff, coaches from Indiana, Western Michigan, and Ohio State, among others.

“It didn’t take long to jump back in the saddle,” McElwain told a small group of reporters Sunday. “The thing that made it easy with the transition was being able to get the staff back together and then our administration, our athletic director has been fantastic. It’s been really easy from that standpoint.”

The Chippewas had been to four straight bowl games before last season’s downfall. McElwain agreed with the description of the program having a grassroots feel.

He described CMU’s recruiting “footprint” and laughed when asked how it compares to recruiting at Michigan.

“Well, considering I just drove through the night to get here from St. Louis,” McElwain said, laughing. “Thank God we had some good drivers on this staff. It’s a lot different. Obviously, we’re regionally based, and they can go anywhere.”

There are no upcoming games scheduled between Michigan and Central Michigan.

But he wouldn’t be opposed to the idea: “As long as they help our budget, I’ll do it.”

He doesn’t have a timeline for when Central Michigan will see success, but certainly, he thinks about how quickly he can get things turned around.

“None of us are very patient, but at the same time, here’s a great thing at Central Michigan — we’ve got a great tradition,” he said. “There’s been great coaches there, they’ve won in the past, they know what it’s about, and we’re excited to try to get us back over the hump.”

And McElwain is excited to be back as a head coach.

“I was really happy what I was doing (at Michigan),” he said. “I’m glad we got another opportunity.”

McElwain doesn’t know Michigan’s new offensive coordinator Josh Gattis well, but their paths have crossed. He likes what Gattis is bringing to the Wolverines offense with his speed-in-space concept, hurry-up, no-huddle.

“I know what a bright coach he is,” McElwain said. “I know those kids are excited to get going with him. The leadership he’s brought is really good.”

McElwain worked with the Michigan receivers last year and understands the personnel Gattis will work with. He said it’s a strong match.

“II think it’s great, especially it fits (quarterback) Shea (Patterson), and those guys on the outside are gonna have an opportunity to really work some one-on-one stuff and go get open and make it happen,” he said.

Harbaugh was ever-present at the Best of the Midwest camp, making the rounds during all of the on-field football drills after delivering a speech.

He was asked by a local reporter about the talent on the west side of Michigan.

“We love the great state of Michigan,” Harbaugh said.