Jordan Brewer and Jordan Nwogu shouldn't be on the Michigan baseball team. 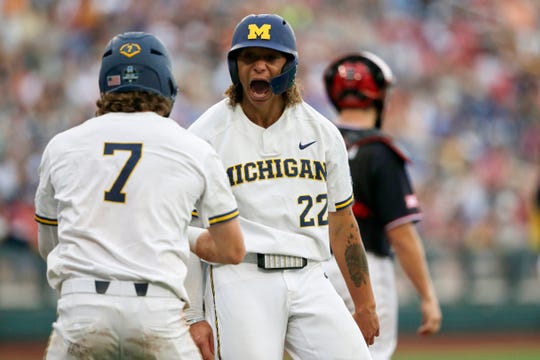 Omaha, Neb. – Jordan Brewer should not be on the Michigan baseball team.

A three-sport athlete in high school, he was set to join the Wolverines’ football squad as a preferred walk-on before a shoulder injury his senior year ended that dream. Brewer didn’t have any baseball scholarship offers until tiny Lincoln Trail College in Robinson, Ill., gambled that his athleticism would translate to the diamond. After two years of honing his skills at the JUCO level, Brewer picked up 25 Division I scholarship offers and interest from MLB teams.

He transferred to Michigan, and now he’s the Big Ten Player of the Year and a third-round pick by the Houston Astros.

Jordan Nwogu shouldn’t be on the team, either. At 6-foot-3 and 215 pounds, most saw his college career playing out on the gridiron, not the diamond. But Michigan coach Erik Bakich realized Nwogu’s potential and convinced the Ann Arbor Pioneer defensive end, who had football scholarship offers from Kent State, Air Force and others, to hang up his shoulder pads in favor of a glove.

Nwogu was a first-team All-Big Ten selection who delivered Michigan’s season-saving moment a few weeks ago.

Unearthing these diamonds in the rough is a pillar of Bakich’s recruiting strategy. He emphasizes the importance of moving beyond the select tournaments and prospect showcases to discover incredible athletes who might be pushed to other sports.

“We want to provide as many opportunities for kids across America as we can.”

“We think our roster should look like the United States of America,” Bakich said during a live interview during ESPN’s broadcast of Monday’s Michigan vs. Florida State game. “We target a lot of inner-city kids. There are a lot of great athletes out there. I think it’s ridiculous with the cost of travel ball and some of these showcases. It negates opportunities for a lot of kids. We want to have a diverse roster and provide as many opportunities for kids all over the country that we can.”

Bakich saw this strategy in action while working as an assistant under Tim Corbin at Vanderbilt. Studies show that participating in travel baseball costs an average of $3,700 a year, with some families spending significantly more. Those costs push elite athletes toward other sports, especially baseball and football.

Bakich wants to catch these potential stars before they leave the sport. He makes it clear that Michigan still scouts the big names at tournaments and showcases – team cornerstones such as catcher Joe Donovan and utility player Jesse Franklin were high-profile recruits. But he believes it’s important to make the extra effort and find the lesser-known players, too. 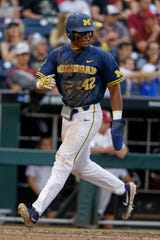 “We don’t have some quota for diversity that we have to meet on our roster,” Bakich said during a Facebook Live session Wednesday. “It’s the belief that there are a lot of good players out there. Whether you’re in the inner cities or out of a suburban country road, there are good players everywhere, and these kids don’t always have the opportunity to get the exposure that they need to be seen.”

Bakich’s tactics have extra impact given college baseball’s scholarship limitations. Schools must distribute 11.7 scholarships among 35 players, so finding under-the-radar contributors as walk-ons or smaller scholarship players is critical to success.

Michigan likely wouldn’t be in the College World Series without Bakich’s beefed-up recruiting efforts. Players like Nwogu and Brewer are critical to the Wolverines’ success, and they’ve played important roles in helping UM win its first two games in Omaha. Next up is Texas Tech or Florida State on Friday at 2 p.m. ET. Win that game, and Michigan is in the CWS final series.

And if Bakich’s recruiting strategy continues to pay off, this might not be a one-time appearance. He wants the Wolverines to become a team that consistently makes appearances in Omaha.

“You have a responsibility to scour the country and find the best athletes you can find,” Bakich said. “Then you end up with a diverse roster, because you find kids that normally would be pushed to football or basketball or other sports, and they’re incredible baseball players. They just need the opportunity to be seen.”