The Wolverines were greeted by friends and family upon their return home to Fisher Stadium on Thursday afternoon.

Michigan coach Erik Bakich talks about what the postseason run meant for the Wolverines. The Detroit News

Ann Arbor — To build a lasting program where the big prize at the end of the season is always a reasonable expectation, there has to be that first run of success.

Michigan’s baseball team, the national championship runnerup, won 50 games this season, became the first UM team to reach the College World Series since 1984 and had its best national finish since the 1962 championship team. While the Wolverines always believed they had what it took to compete at the highest levels of a sport dominated by southern and West Coast teams, it was an unexpected, Cinderella-type season that captured the Michigan fan base.

Coach Erik Bakich believes the NCAA run put the program on the radar of recruits who may have had hesitations about Michigan because of the cold, snowy winters.

In a best-of-three CWS finale, Vanderbilt won the final two games to take home its second national championship in six years under coach Tim Corbin, who had hired Bakich as an assistant with the Commodores and credits him for building a strong recruiting foundation.

Bakich took Corbin’s blueprint at Vanderbilt and, with his own tweaks and vision, has applied it at Michigan.

But first things first. Athletes and coaches often say that to become consistently successful, there has to be that over-the-hump moment. The 41-year-old Bakich, who concludes his seventh season at UM, described this tournament run that way.

Michigan baseball coach Erik Bakich on his team being proud of the runner-up trophy. The Detroit News

The Wolverines were greeted by friends and family upon their return home to Fisher Stadium on Thursday afternoon, an enthusiastic response to a team that revived interest in a program that had not had consistent success since the mid-1980s when players like Barry Larkin and Chris Sabo, Hal Morris and Jim Abbott played.

Bakich is determined to return the Michigan baseball program to national prominence. He has always told his players to focus on the CWS in Omaha as the ultimate goal, but without reaching it, it can be difficult to convey that as a legitimate goal. Now, Bakich has that evidence to prove all the work the players put it in the fall and preseason can realize a championship run, even for a team from the north.

“Omaha is not a city to me. It’s a way of life,” Bakich said. “You’ve got to say, ‘You’ve got to give Omaha effort,’ and everyone in our program will know what that means.”

Pitcher Karl Kauffmann, the starter in Game 3, said the players have embraced what this postseason means for their legacy as Team 153.

“Guys are happy it’s a start of Michigan baseball for the future – that’s how we’re looking at it,” Kauffmann said. “The future will show what it means to the program and how big of an impact it had. I hope I inspired one kid to fill my shoes and take it out here and do a better job than I did. I’m looking forward to seeing these guys compete in the future. Really excited about it.”

Their coach has been the key, the Wolverines said.

“We’re all here because of Coach Bakich,” senior Jimmy Kerr said. “He built this team, he developed us into an Omaha team. An Omaha program starts with an Omaha team. I have a lot of faith in him that he’s going to do the right things, keep getting the right guys in here.

Corbin’s blueprint at Vanderbilt has established success. He inherited a program that had only six winning seasons since 1968, and now he’s won two national championships (2014, 2019) and a runner-up finish in 2015. Bakich learned from Corbin and studied his coaching moves, and that’s what he has brought to Ann Arbor with his own spin.

“There’s definitely going to be challenges with everything but Coach Bakich is a special person,” Kauffmann said. “Everything he does is so intense. The time he puts into everything is incredible. Would it surprise me? Not the slightest bit. Are we close? Very close. But it’s going to take a couple runs at it, a couple recruiting classes here and there and the support from everybody in the athletic department. The future’s bright. As long as he’s at the helm, it’s going to be up and up from there.”

“They can get everything they want at Michigan,” he said.

He needed a tipping point, and he got it with this run, winning the regional hosted by defending national champion Oregon State, then beating No. 1 UCLA at its Super Regional, then making it to the championship series.

“The legacy of this group isn’t that we won 50 games or we were national runner-up or any of the accolades we got along the way,” Bakich said. “It’s that this team, Team 153, has inspired a future generation of Michigan baseball players to realize what the new standard of college baseball is all about. And inspired a believability that being a national champion is a reality. We were one game away from it. The ripple effect of that and how that will impact recruiting and the growth of our program and the consistency that could take place from here on being a perennial Omaha contender, national championship contender, that’s what really is exciting about this. This is what we needed.” 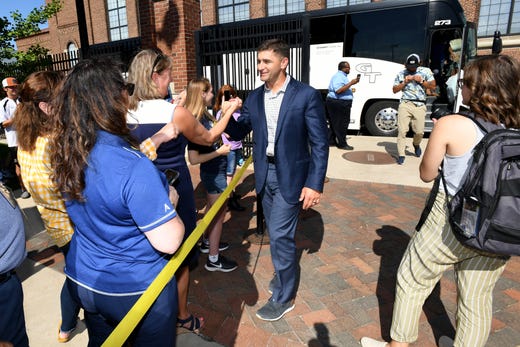 Michigan baseball coach Erik Bakich greets fans and staff members as he and the rest of the team arrive back at Michigan's Wilpon Baseball Complex on Thursday, June 27, 2019, after their runner-up finish to Vanderbilt in the College World Series in Omaha, Nebraska. Michigan lost to Vanderbilt, 8-2, in Wednesday night's deciding game in the best-of-three series. LON HORWEDEL, LON HORWEDEL
Fullscreen 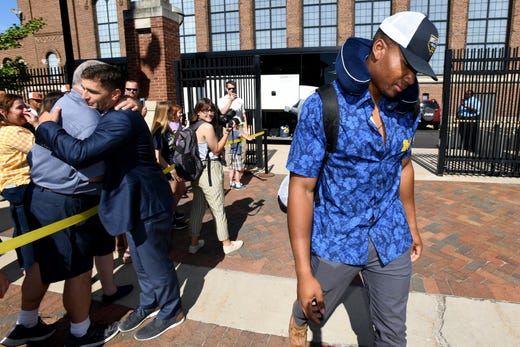 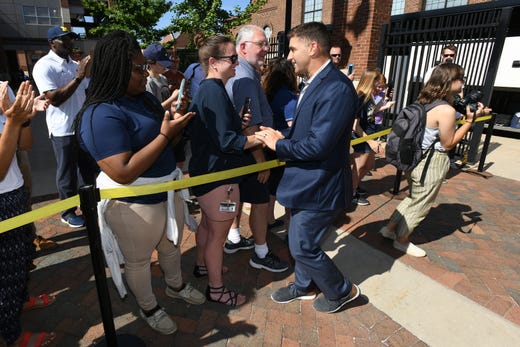 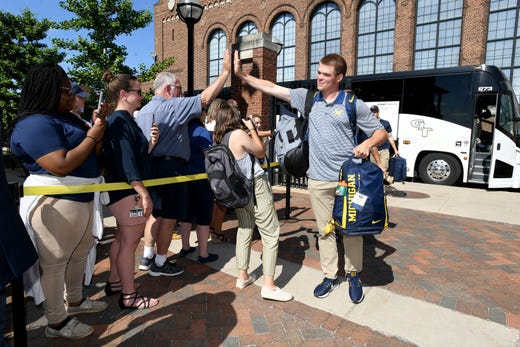 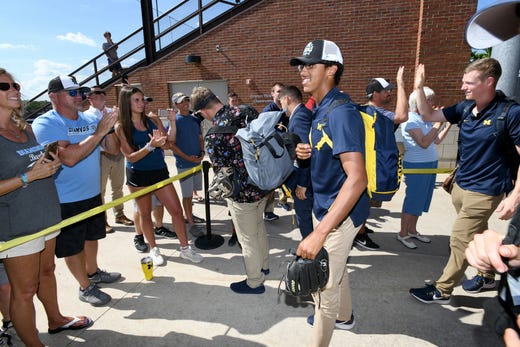 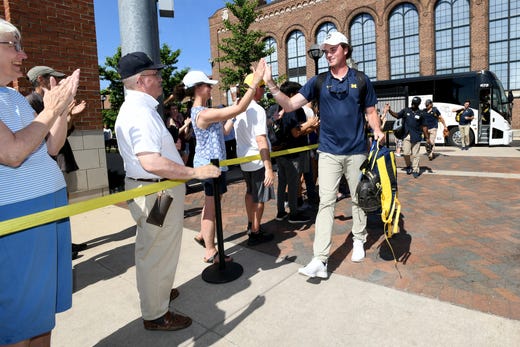 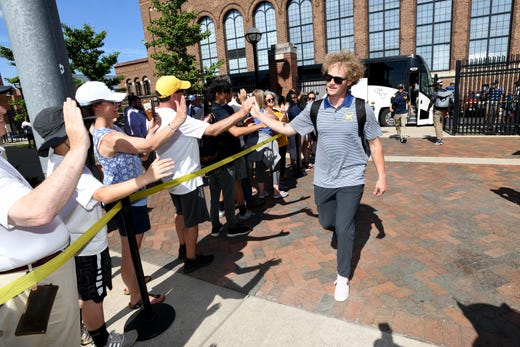 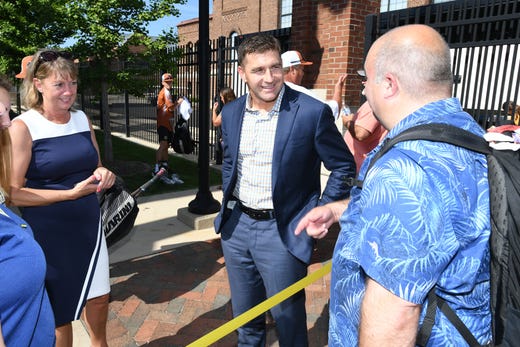 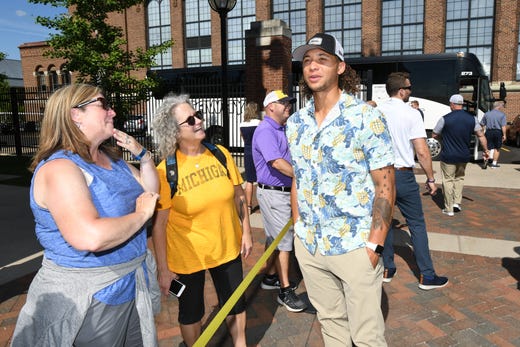 Michigan outfielder Jordan Brewer talks about his next step (heading to Texas on Sunday to start his career with the Houston Astros) with fans and staff members. LON HORWEDEL, LON HORWEDEL
Fullscreen