Franz Wagner on picking Michigan over Alba Berlin: 'I can experience something new'

Franz Wagner explains why he chose to play basketball at Michigan over Alba Berlin in an interview with German newspaper Berliner Morgenpost.

Franz Wagner on picking Michigan over Alba Berlin: 'I can experience something new' 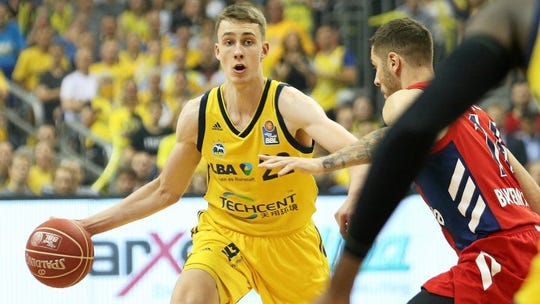 Franz Wagner is ranked the No. 42 overall recruit in the 2019 class by 247Sports. (Photo: Berliner Morgenpost)

Shortly after former Michigan standout Moritz Wagner declared for the NBA Draft in April 2018, he met with a group of reporters to talk about his decision.

When asked what his life would’ve been like if he stayed in Germany and played professionally rather than come to Ann Arbor, Wagner was frank.

“I don't know,” Wagner said at the time. “I graduated high school very early. I was in my young 17s, so I had a whole year where I wasn’t doing anything as a teenager, just playing basketball. I think that year really helped me. I just played basketball, I didn't go to school, I watched TV shows all day and cooked sometimes. That helped me because that told me I don't want to do this.

“I was bored after three months and it's never about money. I never cared about that. I know that because I never had to complain about it, I never had to worry about it so that's a whole other background. I wanted a new experience and I'm very happy I made that choice.”

When it came down to it, Franz ultimately wanted the same thing Moritz did, according to German newspaper Berliner Morgenpost.

“That I can experience something new,” Wagner told Morgenpost, in an article that was translated to English via Google Translate, when asked why he chose Michigan over Alba Berlin. “That I get to (meet) new people and a new culture.”

Wagner, a 6-foot-8 wing, said he was in a “good situation” with Alba Berlin. He played in 57 games with the club — 35 in the Basketball Bundesliga (BBL), Germany’s top league, and 22 in the EuroCup — primarily as a perimeter player off the bench and averaged 4.6 points in 12.4 minutes to help his team to a runner-up finish in the BBL.

His contributions, which was highlighted by a 14-point performance in the BBL championship series against Bayern Munich last month, netted him the league’s best young player award.

Wagner said Alba Berlin has “everything you need in Europe as a younger player” and acknowledged he could’ve played a larger role for the club next season.

“But that's not it. Alba did not do anything wrong,” Wagner said. “I just feel more like (getting) this college experience than becoming a professional basketball player. College basketball is also quite professionally structured, but you do not just think about basketball all the time.”

Wagner said whichever route he took had its advantages. He won’t play nearly as many games in college — Michigan had 37 last season — as he would in Germany but questioned “whether 80 games or more are good for the body.”

More: Breaking down Big Ten basketball after offseason of many changes

There’s also a difference in style of play. While the European game tends to emphasize passing, shooting and finesse regardless of size, Wagner said there’s a different level of physicalness in the U.S.

That’s something that took time for Moritz to get used to, particularly as a big man in the Big Ten. After playing a limited role as a freshman, Moritz improved his strength and conditioning to better handle the rigors of conference play. By the time he left Michigan after three seasons and became a first-round pick, he had packed on 20 pounds.

“The players have a very different mentality,” said Franz, who is ranked the No. 42 overall recruit in the 2019 class by 247Sports. “In terms of the NBA, I know I have to get more physical.”

Wagner said he received advice from his parents, brother and former coaches, and everyone agreed he couldn’t go wrong with whichever path he picked — even despite Michigan's head coaching change.

And in the end, the same reasons prompted Franz to follow Moritz's footsteps to Ann Arbor.

“Many people are disappointed now because they think the situation is extremely good for me in Berlin,” Franz said. “And they think because you decide differently you do not see it that way. But that is not true.

“It was more that I just feel like (going to) college.”