During a radio show Friday, the Michigan coach took a strong stance about the “gray area” in terms of which players have been granted waivers and who haven’t.

Michigan coach Jim Harbaugh says the team is working to get "over the top" this season. The Detroit News

Chicago — Michigan coach Jim Harbaugh is in favor of a one-time transfer with immediate eligibility, but during a radio show Friday, he took a strong stance about the “gray area” in terms of which players have been granted waivers and who haven’t.

He then broached the topic of players saying they have mental health issues to sway the NCAA to grant eligibility. 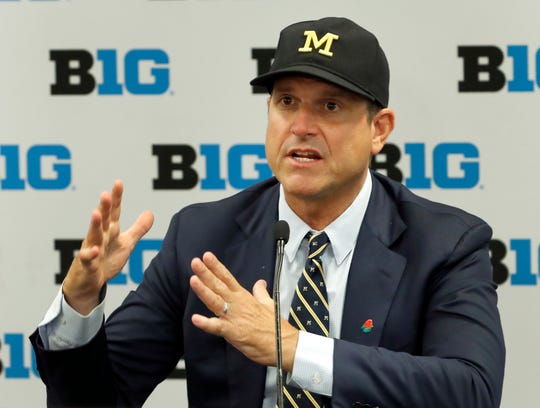 Former Wolverine James Hudson transferred last October and is now at Cincinnati, but had his waiver denied. Hudson shared on Twitter in May that the NCAA didn’t grant him eligibility because he “never spoke up about my mental struggles to administration at the University of Michigan."

“Like many football players I was afraid to speak up about my depression not looking to look weak,” he wrote. “Now the NCAA is telling me that my courage to step forward and speak about my issues was done too late and subjectively my ‘circumstances do not warrant relief.’”

During Big Ten media days on Friday, Harbaugh made clear that coaches are not involved in whether an NCAA grants eligibility. He did say he was in favor of a one-time transfer during a morning session with media, but later on an ESPNU radio show, Harbaugh said it’s unjust for players to try to get immediately eligibility by simply saying they have depression and mental health issues. He did not, however, mention Hudson by name.

Harbaugh was bemoaning how litigious the transfer process has become and “gotten lawyers involved.” And then he discussed his opinion on appealing for a waiver because of mental health issues.

“The other piece that bothers me about it is, the youngster says, ‘This is a mental health issue, I’m suffering from depression,’” Harbaugh said. “Or that’s a reason they’re getting eligible. And once that’s known that, ‘Hey, say this or say that,’ to get eligible. The problem I see in that is you’re going to have guys that are, ‘OK, yeah, I’m depressed.’ And say what they’ve got to say. But down the road, I don’t see that helping them if it’s not a legitimate thing. But nobody would know.”

“You can’t have experiments that aren’t truthful,” he said. “You can’t lie about equations or experiments. Shouldn’t be lying in football.”

At the end of the conversation, Harbaugh clarified he cares about mental health issues.

“Can I add — please don’t write a bunch of letters,” he said. “I care very deeply about mental health. I’m not saying everybody’s lying about that. Just saying, ‘OK, this is America. You started at this school, you didn’t like it and for whatever reason it is, you’re freely allowed to transfer to any other school like any other human being would have a right to do.’ That’s really the bottom line.”