Michigan coach Jim Harbaugh is all for football players receiving a one-time pass to transfer without having to sit a year. 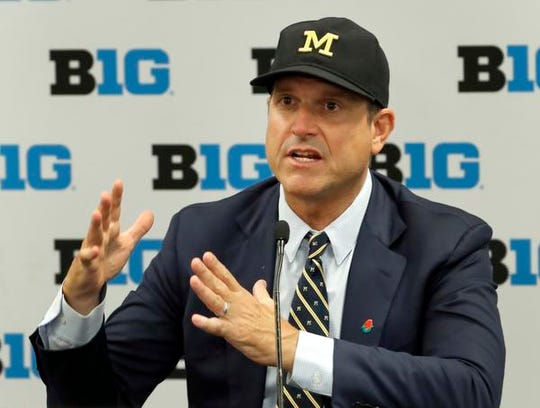 Michigan coach Jim Harbaugh is all for football players receiving a one-time pass to transfer without having to sit a year. It was a bold stance he voiced last Friday during Big Ten media days while many of the other coaches who were asked about transfers said there needed to be more exploration and conversation.

Later, however, during an ESPNU radio interview, Harbaugh triggered outrage when he took the conversation a different direction. While discussing his take on how the transfer rule should be reformed, which would mean a departure from having athletes petition the NCAA for a waiver to ensure immediate eligibility, he suggested some athletes could simply say to the NCAA they suffer from depression or mental health issues to get the waiver.

Many in the media connected the dots. Former Wolverine James Hudson transferred to Cincinnati but had his waiver denied. Hudson had shared on Twitter that the NCAA didn’t grant him eligibility because he “never spoke up about my mental struggles” to administrators while at Michigan because as a football player he was “afraid to speak up about my depression not looking to look weak,” he wrote on Twitter two months ago. Harbaugh, who never mentioned Hudson, concluded by saying he cares deeply about mental health and wasn’t suggesting every player was lying to the NCAA for immediate eligibility. In an effort to tie a bow on his point, he said every player should be able to transfer once, eliminating the need to provide any explanation.

That he used mental health as a means to illustrate his point, however, set the media and social media outrage in motion.

Former Michigan players responded in his defense, as did new offensive coordinator Josh Gattis, who wrote that “mental health is a disturbing disease” that has affected his family and said he stood by Harbaugh. So have those at Michigan’s Athletes Connected, a joint venture between Athletics, the UM Depression Center, and School of Public Health, to improve student-athlete mental health and well-being.

“If I know Jim Harbaugh and I know Michigan, I can’t take it like that, because I know he’s been one of the soldiers in the army of fighting this battle,” Greg Harden, Michigan executive associate director and director of athlete counseling, said Tuesday. "He is absolutely in tune and in touch with and utilizes the resources for his players.”

Harden, who has famously worked with former UM football players Tom Brady and Desmond Howard while they were at Michigan and has often been called the athletic department’s “secret weapon,” is proud of the advancements Michigan and its athletic department have made in terms of working with student-athletes and their mental well-being. 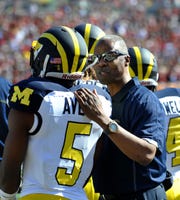 "We have (in athletics) five clinical therapists, one neuropsychologist, we have a psychiatrist who is committed to our students," Harden said. "We have the people and expertise prepared to deal with whatever problem a student is dealing with, whether it’s dating a fool or chronic mental illness. We have people who can deal with a range of issues that a young person can bring into an office.”

Will Heininger was a defensive lineman at Michigan when, at the end of a practice in August 2008, he broke down. An athletic  trainer quickly recognized the issue and took Heininger to get help. Heininger, now in the social work program at Michigan to earn his clinical masters so he can become a therapist, is a mental health advocate who works through the University of Michigan Depression Center. He helped develop Athletes Connected in 2014 and is an outreach coordinator and mental health educator for the Depression Center and works with Athletes Connected in a number of capacities.

Two years ago, he spoke to coaches at Michigan about the program and said Harbaugh and then-basketball coach John Beilein were completely focused on the subject.

"The two who asked by far the most questions were coach Harbaugh and coach Beilein." Heininger said. "And you could see he was taking notes. And just a couple weeks ago I was talking to him about well-being and performance and that relationship in that space."

“When I particularly saw this,” Heininger said, "my thoughts were, it’s mid-July and there’s nothing going on and the media is going to find every way they can to rewrite this headline to get clicks, and I understand that, but I just hope it doesn’t get twisted, because I know how (Harbaugh) feels about mental health. I know how he feels about winning and the body and being interested in how you can maximize every part of that."

What Harbaugh’s comments did was re-introduce the topic of athletes’ mental wellness.

"It still is so misunderstood,” Heininger said. “Many people are ignorant about it and don’t think about brain health and mental health in the same ways that they do physical health. And don’t think about their own and, unfortunately, don’t get treated when their brain, when that body part, dips in functioning, or dips in functioning to a point it’s detrimental to their well-being, that it gets in the way of their day-to-day functioning. So anytime you can bring the mental health conversation to the forefront, I’m a fan of it.”

Rachel Baribeau, Sirius XM College Football host, began “Changing the Narrative” three years ago and speaks to college athletes about a number of topics, including how men should treat women. What she found is that at each stop, there were 30 to 40 athletes waiting to talk to her, and many wanted to speak about depression and their mental health issues and how to get help. So her talks evolved and while she readily admits she is not a therapist, she shares her thoughts on the mental health topic.

After reading Harbaugh’s comments, she sent a tweet last Sunday in which she tagged Harbaugh and said she would fly to Ann Arbor to have open discussion with him on the topic. To her surprise, he then followed her on Twitter and sent her a private message asking if she could talk that night. They chatted for 35 minutes.

“He listened,” Baribeau said. “He really listened. I told him, “There are a ton of coaches who never would have responded. The fact you picked up the phone Sunday afternoon with kids playing in the background, you took time out of your day to make a phone call to someone you don’t know to talk about mental health, and I commend you so much for that.’”

They have continued to communicate the last few days. Baribeau is planning to visit UM to learn from the mental-health experts working with the athletes.

“I truly believe were going to save and change some people’s lives because of it,” Baribeau said of her interactions with Harbaugh. “What I told him is what your mental-health experts teach me, I’ll then take to Buffalo or Clemson or to Texas A&M or to Richmond, these other places I go. I’ve been walking on Cloud 9 since he called because I know the implications that we can help people.”