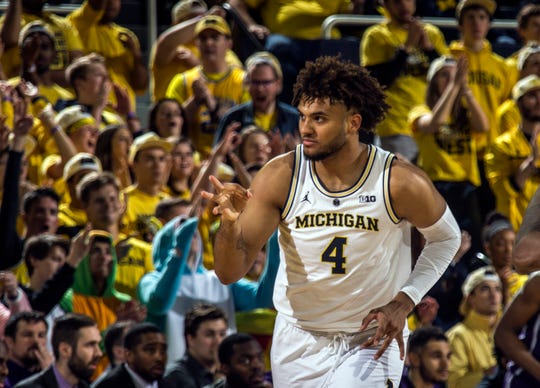 The Michigan men's basketball team's season doesn't tip off for another three months but it's already proving to be a hot ticket.

The Wolverines have sold out of season tickets and have reached their highest demand for season tickets in 19 years with 11,163 claimed, the program announced on Wednesday. That mark surpasses last year’s sales of 10,775 and is the most since the 2000-01 season.

"Thank you from the bottom of my heart for the all the support, all the season tickets that have been sold,” first-year coach Juwan Howard said in a Twitter video posted on the program’s account. “Right now, it looks like we've got a lot of fan support. We're excited about this upcoming season. Our team is working extremely hard throughout the offseason to try to get ready to give you guys something to cheer for.

🙌 @JuwanHoward is fired up for this season and can’t thank our season ticket holders and fans enough!

While season tickets have run out, six-game ticket packages and family packs will go on sale for Michigan donors on Tuesday, to the Michigan digital community on Sept. 4 and to the general public on Sept. 5.

Michigan will open the 2019-20 campaign with an exhibition at home against Saginaw Valley State on Nov. 1 before hosting Appalachian State in the regular-season opener on Nov. 5.

In total, the Wolverines will have 17 home games this season — eight during non-conference play and nine during Big Ten play. Michigan is giving up a conference home game in Ann Arbor to play a neutral site game at Madison Square Garden against Rutgers on Feb. 1.