Scouting the Michigan offense: Plenty of weapons for Wolverines

Scouting the Michigan offense: Plenty of weapons for Wolverines

One can argue the offense starts with the quarterback, but one could also argue — and be correct — that it starts with the offensive line. For the first time in years, the offensive linemen are brimming with confidence and that’s in large part because four of five starters are back to work under position coach Ed Warinner, a proven developer of linemen now in his second season with the Wolverines. 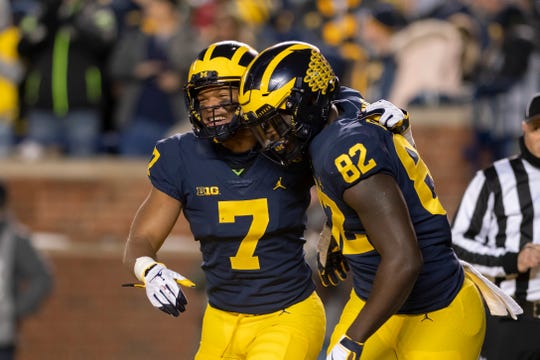 Jon Runyan at tackle and veteran and two-time captain Ben Bredeson anchor the left side, Cesar Ruiz returns to start a second season at center, and a slimmer Michael Onwenu is at right guard. Jalen Mayfield was in a tight competition for the starting job at right tackle with Andrew Stueber, but with Stueber’s recent injury, the job is Mayfield’s. The good news for the offensive line is that it is deep. Maybe the backups are not overly experienced, but there’s depth.

As Jim Harbaugh enters his fifth season as head coach, this is the richest in talent and deepest quarterback room he’s had. It all starts with Shea Patterson, the veteran who started every game last year. He is the most familiar with offensive coordinator Josh Gattis’ no-huddle spread because he ran something similar while at Ole Miss. The Wolverines have a more-than-capable backup in Dylan McCaffrey, who Harbaugh has assured will see valuable playing time this year, along with Joe Milton and freshman Cade McNamara.

On paper, Zach Charbonnet sounds like a major asset for the Michigan running back group, which needed some good news with the departure of Karan Higdon and suspension of Chris Evans.

Tru Wilson, who had 364 yards on 62 carries last fall, is the most game-experienced of the backs, and Christian Turner, who was talked up quite a bit at the end of last season, also returns. But Charbonnet, who enrolled early but had to undergo a planned knee surgery, has tremendous upside. Michigan coach Jim Harbaugh said recently that Charbonnet is “coming on like a freight train” and can see hole, obviously can run and also can catch out of the backfield.

That’s going to be the idea for this pro-spread which intends to utilize all the playmakers, and Michigan has quite a few at receiver. Nico Collins, Donovan Peoples-Jones and Tarik Black are the three main cogs, but Ronnie Bell and freshman Mike Sainristil are expected to be involved in the receiving game as well.

When Gattis talks about speed in space, he’s talking in large part about the play-making receivers, but he’s also talking about the tight ends, the “big speed in space” he has referenced. Sean McKeon and Nick Eubanks think they can be the best tight ends in the country, and in this offense, they very well may get that chance.

Gattis has never been an offensive coordinator — he shared the duties with Mike Locksley last year at Alabama — and has never called plays. Gattis is confident in his ability and hasn’t seemed to sweat this small detail. He comes from a program that was explosive offensively last year, and that’s what he’s set out to accomplish at Michigan. Harbaugh handed over the keys to Gattis, and according to Gattis, he has been hands off. While Gattis will call plays, Harbaugh has not ruled out that he will jump in when he feels he has something to add. Bottom line, though, is how quickly the Wolverines can run this offense without any hiccups. Time will tell. 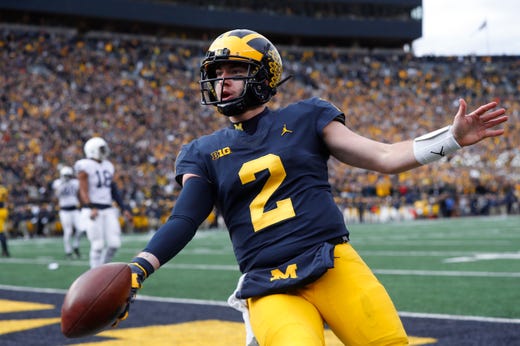 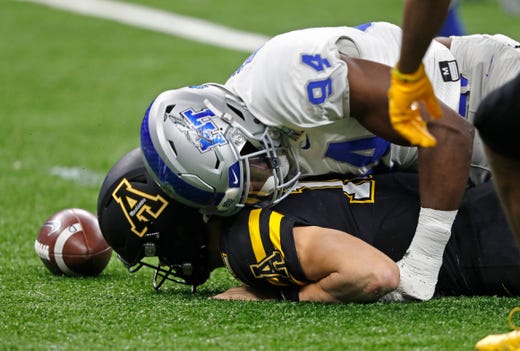 Aug. 31 vs. Middle Tennessee State: Michigan’s new offense will be on display under the lights and should get plenty of opportunity to flex its muscles against MTSU defensive coordinator Scott Shafer’s defense. You might remember Shafer, who spent a year at Michigan and also worked under Jim Harbaugh at Stanford. MTSU is expected to struggle mightily on offense as it tries to replace quarterback Brent Stockstill, the Conference USA MVP last year. The Wolverines are favored big in this one. Prediction: WIN Gerald Herbert, AP
Fullscreen 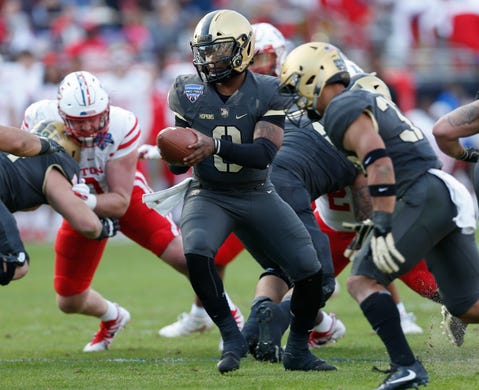 Sept. 7 vs. Army: Michigan defensive coordinator Don Brown said he started preparing for (worrying about?) Army at the start of spring practices. That’s what facing a service academy offense can do to a DC. The Black Knights have won 29 games the last three seasons under coach Jeff Monken, and there are high hopes again for the program, not to mention predictions of another win over Navy. This could very well be tricky for Michigan’s defense, but the Army defense is no slouch – it forced 13 fumbles last season. Prediction: WIN Jim Cowsert, AP
Fullscreen 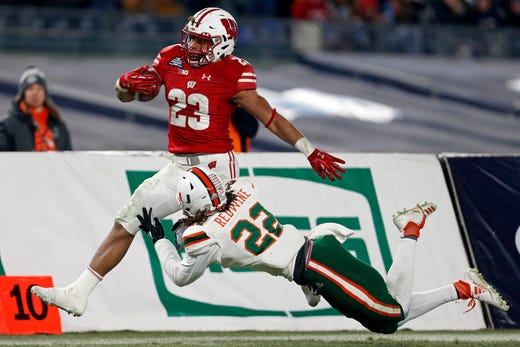 Sept. 21 at Wisconsin: The Wolverines are off the weekend before their Big Ten opener at Madison, which will be a noon Eastern kickoff. Bet Michigan was relieved it wouldn’t have to play a night game at raucous Camp Randall. As running back Jonathan Taylor goes, so go the Badgers. He rushed for 2,194 yards and 16 touchdowns last season. The Badgers must fill holes on defense, particularly at linebacker. Will Michigan prevail in its first road test of the season? Prediction: WIN Adam Hunger, AP
Fullscreen 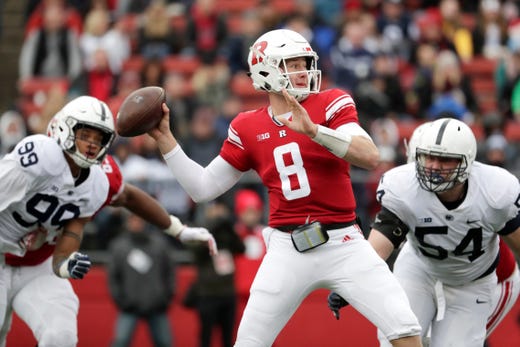 Sept. 28 vs. Rutgers: Quarterback Artur Sitkowski struggled last season to say the least. He was last nationally in pass efficiency and threw 18 interceptions – worst nationally. Running back Raheem Blackshear is a talent, but whether Rutgers can improve on its 1-11 record from last year depends in large part on whether the Scarlet Knights can cut down on mistakes and whether the offense can find a way to score points. It’s hard to imagine they’ve made a significant turnaround. Prediction: WIN Julio Cortez, AP
Fullscreen 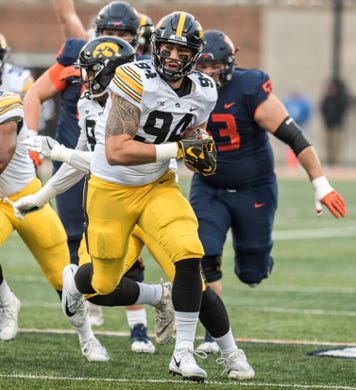 Oct. 5 vs. Iowa: The Hawkeyes’ defense is highlighted by A.J. Epenesa, a tremendous pass rusher, and the offense returns a veteran quarterback in Nate Stanley, who has a strong supporting cast of running backs and a couple top-notch receivers. With Stanley starting, however, Iowa is 9-9 in Big Ten games. Can he change that on the road at Michigan Stadium? Probably not. Prediction: WIN Holly Hart, AP
Fullscreen 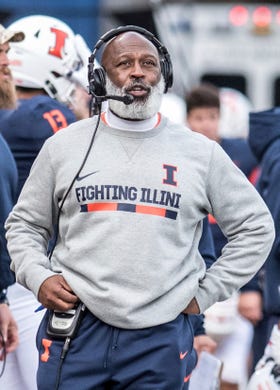 Oct. 12 at Illinois: This will be an interesting one with Brandon Peters now the starting quarterback for the Illini after transferring from Michigan. He’s no slouch and he certainly has a good idea how to attack Don Brown’s defense. But can the Illini do that? Running back Reggie Corbin is back and the offensive line returns four starters. The Illinois defense was porous, among the worst nationally last year. How much can it improve this year under new defensive coordinator – head coach Lovie Smith? Prediction: WIN Holly Hart, AP
Fullscreen 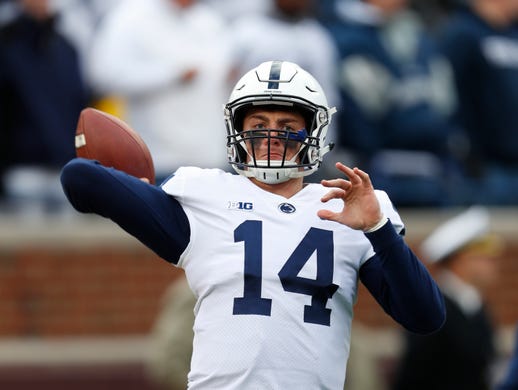 Oct. 19 at Penn State: This will be a whiteout and Beaver Stadium is always a tough environment. The Nittany Lions are young at the offensive skill positions but should be tough on defense. It’s the second straight road game for the Wolverines and a week before the clash at home with Notre Dame, and will test their game-by-game approach. Prediction: LOSS Paul Sancya, AP
Fullscreen 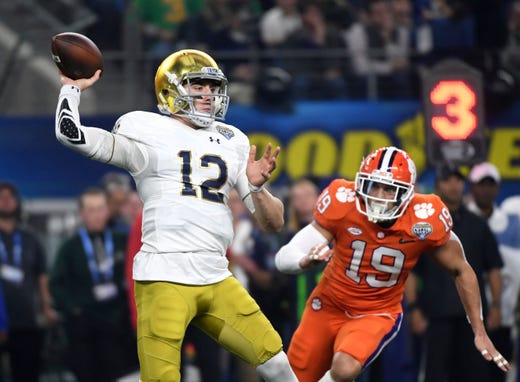 Oct. 26 Notre Dame: Michigan wants to avenge last year’s opening loss that featured an early-game lapse by the defense and a late-game surge by the offense. The Irish will be guided by a steady hand at quarterback in Ian Book, and while it could be running back by committee, the Notre Dame offense is expected to be explosive. The Irish also get a bye before facing Michigan, but the Wolverines will win for the first time in the series since 2013. Prediction: WIN Jeffrey McWhorter, AP
Fullscreen 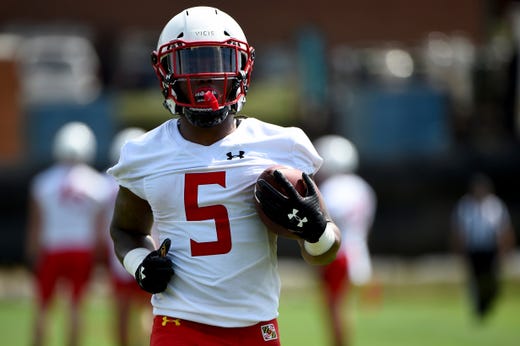 Nov. 2 at Maryland: The only thing that might be interesting about this game is whether Maryland coach Mike Locksley and Michigan offensive coordinator Josh Gattis – they were co-offensive coordinators at Alabama last year – are still giving each other verbal jabs. The Terps have some talent like running back Anthony McFarland, but the defense returns only four starters. Prediction: WIN Will Newton, AP
Fullscreen 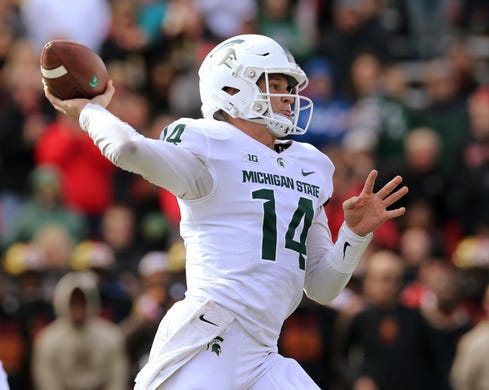 Nov. 16 vs. Michigan State: Michigan State is going to be scary for any team this season because of its standout defense. Quarterback Brian Lewerke, healthy now, should not be overlooked and he’s got solid receivers and a veteran tailback. The offensive line struggled last season because of injury and went with nine different lineups, but the Spartans have experience on the line this year. This will be a defensive struggle. The Wolverines are off the weekend before, while MSU is playing Illinois. Prediction: WIN Gary Cameron, AP
Fullscreen 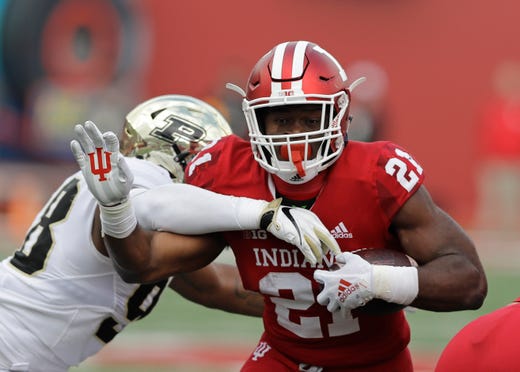 Nov. 23 at Indiana: Sandwiched between Michigan’s chief rivals is Indiana, which is not a bad place to be for a team that has played the Wolverines tough in recent meetings. The Hoosiers have talent at the skill positions, notably running back Stevie Scott. Defensively, the Hoosiers should be tough in the secondary with three returning starters, but will they improve on yards allowed last year (423.8)? Will the Wolverines be caught looking ahead to The Game? Prediction: WIN Darron Cummings, AP
Fullscreen 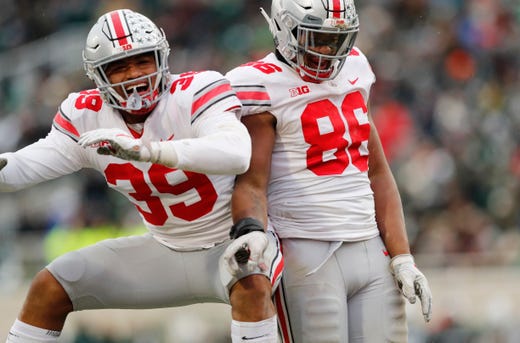 Nov. 30 vs. Ohio State: Here it is, The Game. The Buckeyes’ defense should be outstanding and the key will be whether quarterback Justin Fields can stay healthy through the long season. From Michigan’s side of things, at this point the offense should be humming. In many ways this game feels like it might be about how new Michigan offensive coordinator Josh Gattis and first-year Ohio State coach Ryan Day manage their jobs. Michigan’s defensive staff and returning players have been thinking about this game for a full year, wanting to right the wrongs from last year’s 62-39 loss. Can they? Prediction: LOSS. FINAL RECORD: 10-2 (7-2 Big Ten) Carlos Osorio, AP
Fullscreen