Danna was first-team All-MAC last season, racking up 66 tackles, including 15 for a loss and 9.5 sacks.

Ann Arbor — For Mike Danna, Michigan had him at hello.

In fact, Michigan always had his heart. But after playing for Warren De La Salle, Danna went to Central Michigan, where he was as all-Mid-American Conference first team last season and earned the team’s Herb Deromedi Most Valuable Player award. He had 66 tackles, including 15 for a loss and 9.5 sacks last season and considered heading to the NFL but instead entered the transfer portal. 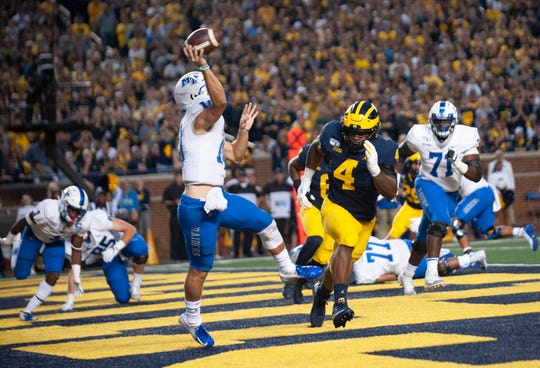 A few schools called, but he only had ears for Michigan.

“As soon as they came, I already pretty much knew the answer,” Danna said this week. “It was go time.”

He always had been a Wolverines fan and that never wavered. And now that he’s part of the team as a defensive end, he can’t seem to contain how grateful he is.

“Michigan has always been a dream of mine,” Danna said. “My whole childhood, me and my father always watched Michigan games. Getting that offer was kind of like, as soon as I got the offer I knew, I’m coming to Michigan. I’m 45 minutes from home, my parents love that. Being able to come to University of Michigan, having it be my dream school, having my parents come out and watch me do what I do on the field is a blessing.”

Sherrone Moore, Michigan’s tight ends coach who was at Central Michigan and knew Danna, said that during a meeting, the Michigan coaches were asked if they knew any players who were transferring. Moore chimed in and recommended Danna, who had known since he was in high school.

“I was like, ‘Yeah, I think I know somebody who might be able to help us,’” Moore said Wednesday. “Mike is an awesome kid, he’s doing an awesome job here. A guy who’s all about his business. He’s an extremely talented kid, God-given talent, but his drive, his motivation and how his mom and dad have brought him up — he’s a great kid and he’s really focused and very mature. He’s been that way since he was a freshman. He’s got that mindset of, ‘I’m going to be successful and I’m going to do whatever it takes.’”

When Danna met with defensive coordinator Don Brown, he was told the Wolverines were looking for depth on the line and anything he could do to help.

“That’s what I’m going to do,” Danna said. “Not a lot of guys get a chance to play for the University of Michigan. To be here is a privilege. I’m going to keep doing what I’m doing and grinding.”

“That dude is a worker,” Nua said.

But before Danna got to work, he took part in a Michigan tradition, running out of the Michigan Stadium tunnel onto the field and then under the "M Go Blue" banner, which the plays hit on their way to the sideline.

“It was unbelievable,” he said. “It’s only a few things that’s close to having that feeling. It’s something not a lot of people get to do, so it was a privilege to get to do that and get to do it a few more times. I’m going to make the most out of every opportunity.”

Danna arrived weighing about 242 and as the team entered camp, he was at 260.

“I feel stronger, I feel faster, I feel quicker, so I’m pleased with it,” Danna said, later adding he knew it was a gamble to transfer to UM. “But I know the work I put in. I know you get what you put in, so if you put in a lot of work, something good is going to come out of it. There’s always good things that happen to good people. I put in a lot of work throughout the summer, I knew what I was getting myself into, and I gambled on myself because I knew at the end of the day I could do it.”

Michigan defensive end Mike Danna, a grad transfer from CMU, on hitting the banner before the first game. The Detroit News

It isn’t easy to transfer into a new team and have only one year to play. But Danna said it’s been a smooth transition. His teammates immediately took to him, and they’ve been hanging out constantly, and, he said, they’ve been treating him like he’s been at Michigan the last four years.

The coaches love his maturity and his leadership, and he doesn’t hesitate to speak up when needed.

“You’ve got to hold guys accountable, because I expect to be held accountable,” he said. “Everybody got to be able to have open ears, closed mouths sometimes, and that’s how I view it. If somebody is holding me accountable, I close my mouth and I listen. If I hold somebody else accountable, I expect the same. It’s all about holding each other accountable and that’s what’s really going to have a big response to our end goal at the end of the season, holding everybody accountable to their jobs.”

Danna doesn’t take for granted his opportunity to play football for and attend his dream school, where he is working on a master’s degree.

“I take it with me every day,” he said. “Every day I remind myself, ‘You’re playing for the University of Michigan, this is your dream,’ but at the same time it’s a grind. I don’t take no days off. I look myself in the mirror and tell myself, ‘If you’re going to be this big guy on the field, you’ve got to live up to it.’ I check myself every morning, I look myself in the mirror every morning, I knew what I signed up for. I’m working.”