After battling foot injuries for two seasons, the wide receiver is ready to deliver on the promising career that appeared in the offing in 2017.

Bob Wojnowski, John Niyo and Tony Paul preview MSU-Arizona State and review Michigan's double-OT win over Army and look ahead to the Wisconsin game in two weeks. The Detroit News

Ann Arbor — When Michigan receiver Tarik Black scored on a 36-yard reception in the season opener, it felt like he had been there before.

As freshman in 2017, he started the season opener against Florida and scored on a 46-yard pass from Wilton Speight. He was young phenom and after his 83-yard performance that day, he became the talk of the Michigan receivers.

“It was my first touchdown since my first touchdown,” Black said Wednesday night of his score against MTSU. “It was a really good feeling. Kind of reminded me a little bit of my first one, so it was kind of like a déjà vu-type thing.”

His first since his first.

Much has happened to Black in the interim, injuries he believes are finally behind him.

“You guys knows my history,” he told reporters.

Those who follow Michigan do know Black’s history. He was the Wolverines’ leading receiver when, in the third game of the 2017 season against Air Force, in which he had five catches for 55 yards, he suffered a broken left foot.

At that point of the season, he led the team with 148 yards on 11 catches and that lone touchdown and expectations were high. But those were squelched when he had season-ending surgery.

The 6-foot-3, 215-pounder made a full recovery but shortly before the start of last season, he broke his right foot while running a route in practice. He said he heard a pop after planting and knew exactly what had happened.

Black missed the first seven games but returned, although not at 100 percent, to play sparingly in the final six games. He said he is fully healthy now and has felt that way since spring practice. Through two games this fall, he has seven catches for 104 yards and one score. The Wolverines are preparing for the Big Ten opener at Wisconsin on Sept. 21 after having this Saturday off.

“Being able to be out there and play and contribute with my teammates and help my team is just a great feeling,” Black said. “I’m very thankful.”

It might have been a déjà vu moment getting that touchdown reception in the season opener, but it represented more than that first score as a freshman. This signaled a new start with surgically repaired feet, a rod and screws in each, and proof to himself that, mentally, he had moved on from those injuries. 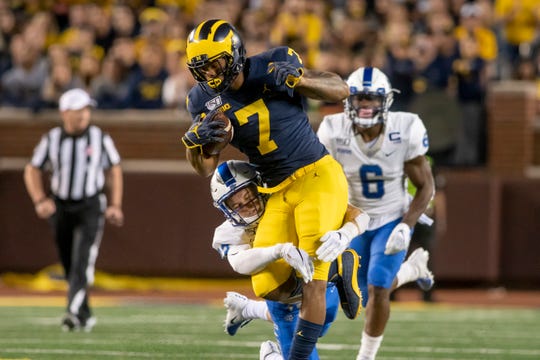 “Just going through back-to-back injuries, that’s never happened to me. I’ve never been hurt playing football, so it was something new for me,” he said. “And I kinda got a little PTSD from it coming back in the beginning. But now I think I’m out of that phase. I’m past that and I’m ready to move forward.”

He explained what he meant by PTSD, and it made sense. All the second thoughts, the concerns about, “What if?” It’s only natural that after enduring the same injury in both feet, he would wonder, “Well, what’s going to happen next?” That can’t be chalked up the mind playing tricks, because the mind knew exactly the reality he had been through.

“After the first one, I didn’t really expect the second one, you know what I’m saying,” Black said. “After that it’s like, ‘What if it happens again?’  I’m out of that space now and I’m ready to go and move forward. You always have those little things you think may happen, especially coming back after two of them. Over time you just kinda forget about it and move forward. I’m in that space.”

Black said he leaned on his faith and developed a “better relationship with God.” He said he has learned to trust the process.

“That really helped me a lot,” Black said.

At no point did Black, a Connecticut native, think about quitting the game.

He also wanted to make a point about the Michigan receivers, who have been short one, since veteran Donovan Peoples-Jones has missed the first two games. He could be back for the Big Ten opener. Black said he’s not into making claims of being the best group of receivers, but he likes the options Michigan has, with himself, Peoples-Jones, and Nico Collins along with the slot receivers Ronnie Bell and Mike Sainristil.

He’s also not into setting personal goals. Black said his focus is to be a vital part of this team trying to win a Big Ten championship. After two weeks of the new up-tempo offense that’s intended to get the ball in the hands of the play-makers, there hasn’t been any consistent evidence of the explosiveness of this offense.

Black assures it’s there and will be on display. 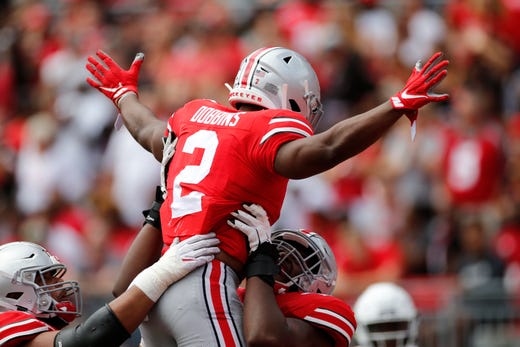 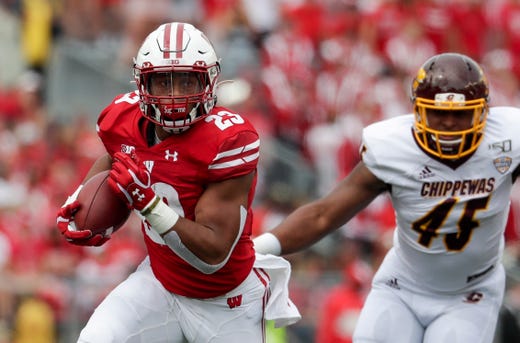 2. Wisconsin (2-0) – The competition hasn’t been great, but in two weeks the Badgers have outscored their opponents 110-0. Jonathan Taylor (23) continues to roll over defenses, running for 102 yards and three touchdowns while also catching a touchdown pass. The defense has been as impressive as it has yet to give up a point this season and held Central Michigan to just 58 total yards. Last week: 3. Morry Gash, Associated Press
Fullscreen

3. Michigan (2-0) – Don’t knock the Wolverines for celebrating their overtime win against Army. The Black Knights are a good team with a difficult offense to defend, and Michigan did well to limit them to 243 yards and end Army’s 10-game winning streak. The issues, though, are on offense as the Wolverines continue to look sloppy while running for just 108 yards with 100 yards and three touchdowns coming from Zach Charbonnet (24). Last week: 1. John T. Greilick, Detroit News
Fullscreen

4. Penn State (2-0) – For the second straight week, Nittany Lions quarterback Sean Clifford (14) was quickly ending any concerns about that position. Against Buffalo, he threw for 279 yards and four touchdowns while running for 51 yards. It took until the second half to get rolling this time, but the Nittany Lions pulled away in the second half and now get set for their rivalry game next week with Pittsburgh. Last week: 5. Barry Reeger, Associated Press
Fullscreen 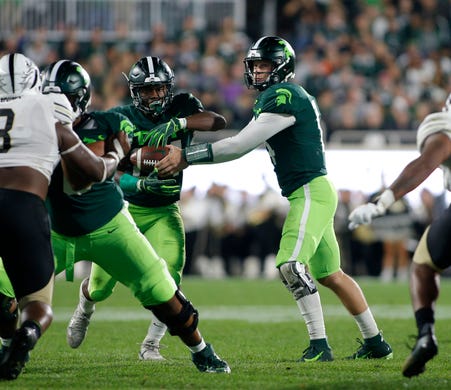 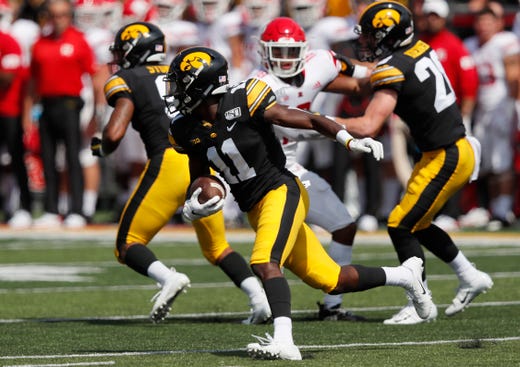 6. Iowa (2-0) – It was a smooth start to Big Ten play as the Hawkeyes opened Big Ten play by shutting out a Rutgers team that scored 48 points in the opener. Quarterback Nate Stanley threw for 236 yards and three touchdowns as the defense limited Rutgers to 125 yards and forced three turnovers as the Hawkeyes look forward next week’s rivalry game with Iowa State. Last week: 4. Matthew Putney, Associated Press
Fullscreen 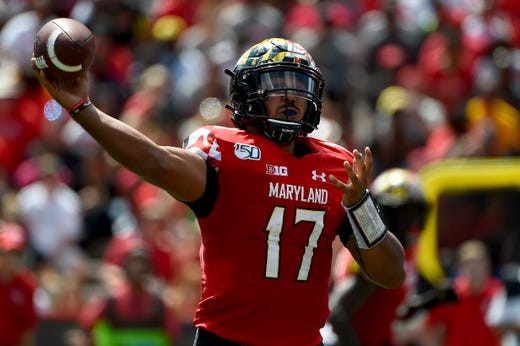 7. Maryland (2-0) – Many were wondering last week how seriously to take the Terrapins after they beat Howard, 79-0. After rolling up 63 points against a ranked Syracuse this team, many are no longer wondering. Transfer quarterback Josh Jackson of Saline (17) had another impressive game, throwing for 296 yards and three touchdowns as the Terps head to Temple next week before jumping into conference play. Last week: 9. Will Newton, Associated Press
Fullscreen 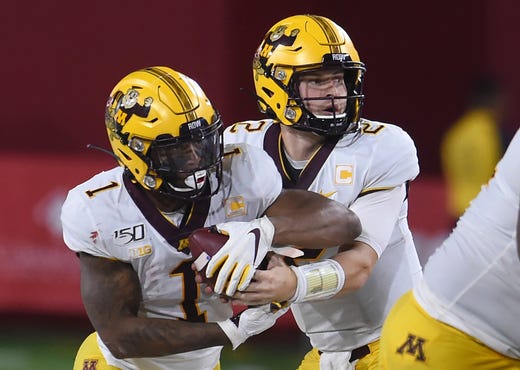 8. Minnesota (2-0) – A road game at night against a mid-major at night on the other side of the country probably wasn’t the best formula for a win, but thanks to an interception by Antoine Winfield Jr. on the final play of the game, the Gophers head home unbeaten. It was a dramatic end to a back-and-forth game as the Gophers scored on a fourth down in the final minute to tie the game and force overtime. Last week: 8. Eric Paul Zamora, Associated Press
Fullscreen 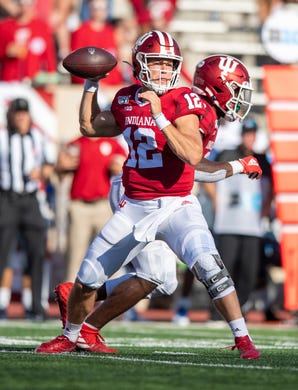 9. Indiana (2-0) – The Hoosiers cruised past Eastern Illinois to stay unbeaten, getting a pair of touchdown passes from starter Michael Penix Jr. and two more from backup and former starter Peyton Ramsey (12), who was 13-for-14 passing for 226 yards. The shutout win was the perfect warm-up as the Hoosiers get set to host Ohio State next week. Last week: 10. Doug McSchooler, Associated Press
Fullscreen 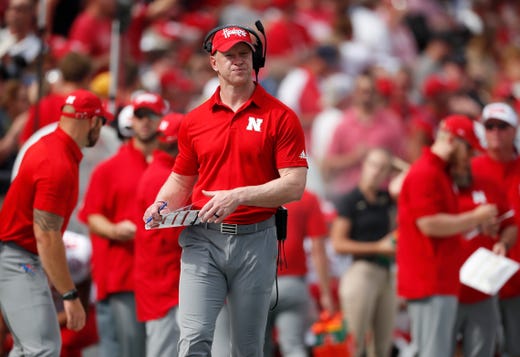 10. Nebraska (1-1) – Colorado is proving to be quite the nemesis for Huskers coach Scott Frost (pictured). For the second straight year the old rival knocked off the Cornhuskers, this time rallying in the second half before winning in overtime. A complete game is still missing for the Huskers as QB Adrian Martinez was perfect in the first half for 180 yards but was 7-for-15 in the second half with an interception and he was sacked six times. Last week: 7. David Zalubowski, Associated Press
Fullscreen 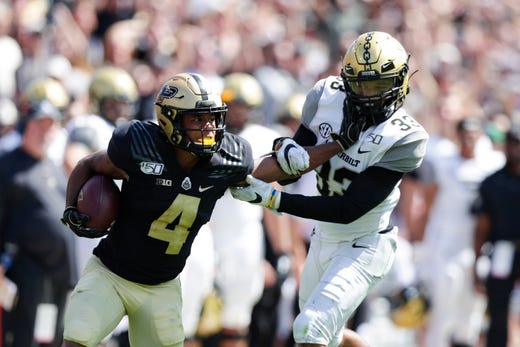 11. Purdue (1-1) – The Boilermakers put last week’s last-second loss behind them by rolling over Vanderbilt of the SEC. The offense was the story as QB Elijah Sindelar passed for 509 yards and five touchdowns and ran for another, while WR Rondale Moore (4) caught 13 passes for a career-high 220 yards and a touchdown. The tough schedule continues next week against TCU. Last week: 11. Michael Conroy, Associated Press
Fullscreen 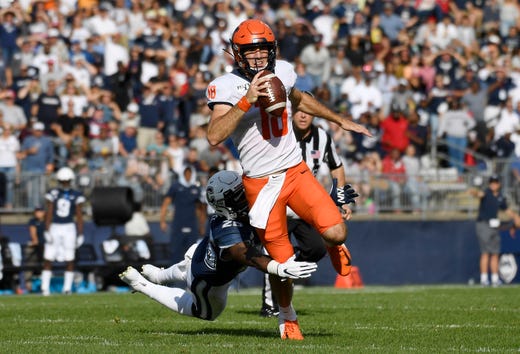 13. Northwestern (0-1) – The Wildcats might have been the only team that needed a bye after just one week coming off the loss at Stanford in the opener. The Cats are hoping the early break provides a reset for the offense and quarterback Hunter Johnson, who is the clear No. 1 now that T.J. Green is lost for the season to a foot injury. Last week: 12. Tony Avelar, Associated Press
Fullscreen 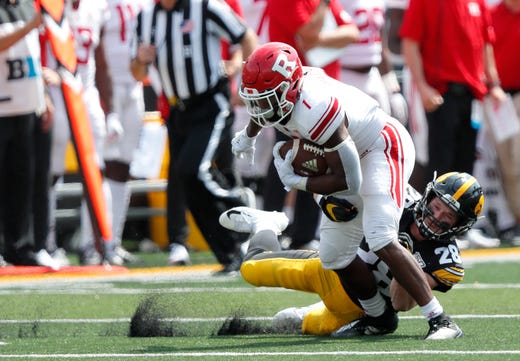 14. Rutgers (1-1) – The Scarlet Knights were feeling pretty good after scoring 48 points in their season-opening win over UMass. However, things got real in Week 2 as Rutgers traveled to Iowa and got shut out. The Knights managed just 125 yards against the Hawkeyes, punting 10 times and turning the ball over three times, while throwing for just 41 yards. Last week: 14. Matthew Putney, Associated Press
Fullscreen