The returns came in quickly and they have been harsh from former Michigan players, national college football analysts, even from Michigan coach Jim Harbaugh.

The Wolverines' loss at Wisconsin last Saturday — specifically, the lackluster way they lost — has put a magnifying glass on the program that is now in its fifth season under Harbaugh. 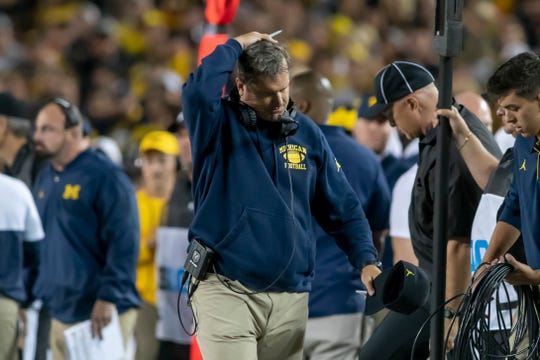 Jim Harbaugh has not sidestepped criticism after the 35-14 loss in which Michigan was outmatched against Wisconsin. (Photo: David Guralnick, Detroit News)

Harbaugh, to his credit, has not sidestepped criticism. How could he after that performance in a 35-14 loss in which Michigan was outmatched and outprepared even though both teams were off the previous week?

“Watching film, I think it was pretty obvious to everybody that watched it — the entire football world — really from A to Z, wasn’t good, wasn’t good enough,” Harbaugh said Monday at his weekly news conference. “Not acceptable.”

Chris Spielman, the former Ohio State standout who played for the Detroit Lions, is now a Fox NFL color commentator after spending years as a college football analyst. He has always keenly observed Michigan football, as well as Ohio State.

“I’m not being facetious or I’m not speaking in hyperbole, take the helmets off, and I might as well turn on Central Michigan, Western Michigan, Eastern Michigan, Ferris State, Wayne State, any other state up there, Grand Valley State, because that‘s not a Michigan team,” Spielman said on the podcast. “When you go to a place like Michigan, there’s a certain standard to be upheld. When it’s not upheld, there are going to be consequences.

Hooley and Spielman spoke of Michigan in context with Ohio State, which has rolled through the early part of its schedule with new coach Ryan Day and first-year quarterback Justin Fields. Spielman has been an avid supporter of Harbaugh since he was hired and has always spoken of a desire to have the Michigan-Ohio State rivalry return its luster. The Buckeyes have won 14 of the last 15, including the last seven.

“Watched the whole Michigan game. I can’t recognize what I’m seeing on the field,” Spielman said. “It comes down to this, people can say what they want about Jim Harbaugh and maybe he’s lost it a little bit, I don’t know, as far as being in touch. It seems like he’s out of touch, that’s what they say, but it’s there’s such a discrepancy in talent when you compare Ohio State’s talent to Michigan’s talent. It’s not even close, and I have no idea how it got that way.

“Michigan should never be in a position for wanting for talent. (Defensive coordinator) Don Brown’s a good football coach, Ed Warinner’s a good offensive line coach. The other thing people weren’t talking about, if you want to run that offense, you have to recruit to that offense. They haven’t been recruiting to that offense. It’s a mess right now. It’s a big mess now. It’s one loss in the Big Ten so they certainly can turn it around, but I don’t see any signs of them turning it around. People are complaining about the offense? I mean, you look at it, (Wisconsin running back) Jonathan Taylor had to get IVs after the first quarter because he ran so much.  I thought he was on the cross country team.”

Spielman isn’t alone in his thoughts on the state of Michigan’s football program, which is 2-1 and ranked No. 20. Charles Woodson, Michigan’s 1997 Heisman Trophy winner, said on Fox last Saturday that he was “embarrassed” watching the Wolverines’ loss at Wisconsin. Former All-American offensive lineman Steve Hutchinson posted on Twitter, “Forget about winning. How about we just compete?”

He was particularly disturbed by Michigan bringing in Ben Mason, the fullback converted to defensive tackle, to carry on second down at the Badgers 7. He gained 3 yards before fumbling.

“It says everything about where the two programs (Michigan and Ohio State) are,” Spielman said.

Former Michigan All-American offensive lineman Jake Long included a video clip on a Tweet with Michigan linemen walking, not running, onto the field to begin a series. “Out of everything today, this bugged me the most. I don’t care if you’re down by 100, you don’t walk onto the field like that. Good or bad finish the game with a purpose.”

That comment from Long struck Spielman, a hard-nosed linebacker.

“They’re not playing with any confidence, so thought brings hesitation, hesitation brings embarrassment and also missed opportunities,” he said. “Why they may look slow — I’m not saying they’re slow. They can probably be great-timed 40 (yard dash) guys — I don’t know the answer to that. I do know this, they’re not in sync, and as a football player, if you’re out there thinking, you have no shot especially against an opponent that’s not thinking. Michigan was so slow they made a normally slow looking Wisconsin team look like an Olympic track team.”

Spielman said he wants to see the Wolverines turn things around to shore up a Big Ten he doesn’t think is very good.

“It comes down to players,” Spielman said. “Michigan might have very good players, but they’re not playing very well. That’s just the fact. In the Big Ten, because it’s horrendous besides Ohio State and Wisconsin, they need Michigan. And Michigan State, they’re like the scrappy little guy that’s always in the corner screaming for attention, but they’ll fight ya. They will fight. Man, they are fighters.”

Now it’s a matter of how Michigan will fight.